Hi i thought i would start a thread on Alien Covenant and the potential look and feel of the movie.

This will be based on what we know about the Synopsis, comments by Ridley and Cast, Production crew comments and shooting locations and then looking at confirmed Concept Artists and other Designs Staff and what they have brought to the table in the past and how any previous Work can fit in with Alien: Covenant.

So feel free to contribute...

I will start the ball rolling with Steve Burg

Steve Burg was one of the main designers on Prometheus, he started work when they was working on Spaights draft.

He mainly worked on the Ships design, the Magellan which evolved into Prometheus...  Looking at Alien Covenant and Set Photos and how the Covenant could be a mixture of New and Old Tech and so could be more similar to the Nostramo than Prometheus... i came across these two concept works from a while back of Steves. 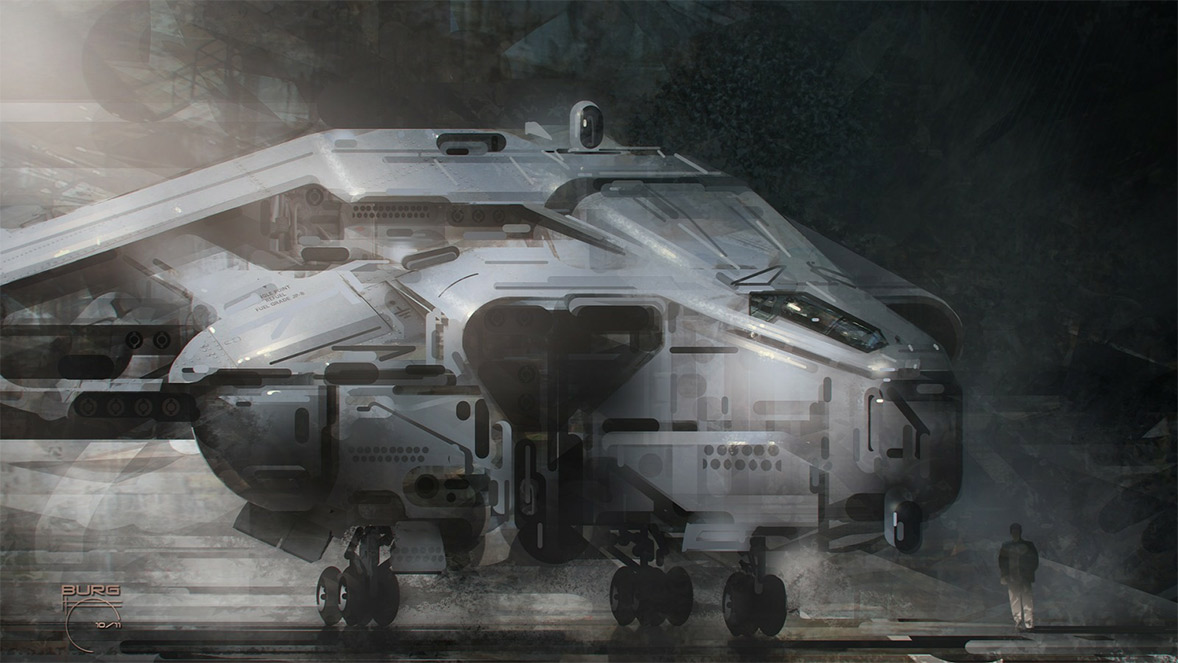 Both give that Nostramo kind of a look, and remember the Nostramo was a vessel created in 2101 and commissioned to later be used by Weyland-Yutani So yes looking at Steves work in the past, i would say those two images i first posted would be something similar to the design of the Covenant and its Drop Ship unless the Blown Up Prop was the Ship but only showed a small part of it like Prometheus in last image above.

Another piece of Concept work by Steve Burg is this one. Again these are not Concepts from Alien Covenant but i could see something similar like this with a Giger Art Touch (unless Paradise Engineers do not posses the Bio-Tech of the LV-223 Engineers).

Either way something like this would be a great addition to Alien Covenant.

Is also working on Alien Covenant, he has mainly worked as a Matte Artist for movies, both in terms of Concept work and also in terms of actual Matte work used.

So he both designs a concept feel of Locations, and architecture for movies he has done in the past as well as background Matte work.

Here is some of his work that could relate to Alien Covenant.

These designers have a monumental task before them. I saw somewhere (maybe here) that the creature designer was named Chris Haag? Or something like that. Does this ring a bell? I've been wanting to explore his work.

My interpretation of Michael Fassbender's comments are that we'll see a merging of Engineer (or SP?) technology and terrestrial tech, possibly David's work superimposed over their own?

I just don't know what to make of this regarding the Covenant ship. To me, it would be a shame if RS and co. took the fan's complaints so to heart that they reproduced the Nostromo's aesthetic. I don't want to go backwards! Hopefully, there is a blending of the sort of tech on view in Prometheus with the more practical applications of a less luxurious vehicle, and the more random aspects of long term human habitation, which could definitely echo the Blade Runner look.

That would excite me, there was an element of whimsy in both BR and Prometheus that I'd like to see perpetuated in AC.

I do wonder if Scott will go more Mobious as he did in the Original and give that run down future look like Bladerunner and Alien...

Now some Moebius influence I wouldn't mind at all. Maybe we'll see some of that in the Engineer architecture? I saw that Dane Hallett was one of the concept artists working on Alien Covenant, so I googled the name and found this image on a tumblr with the caption "Xenomorph by Dane Hallett". Anyone have thoughts on this? 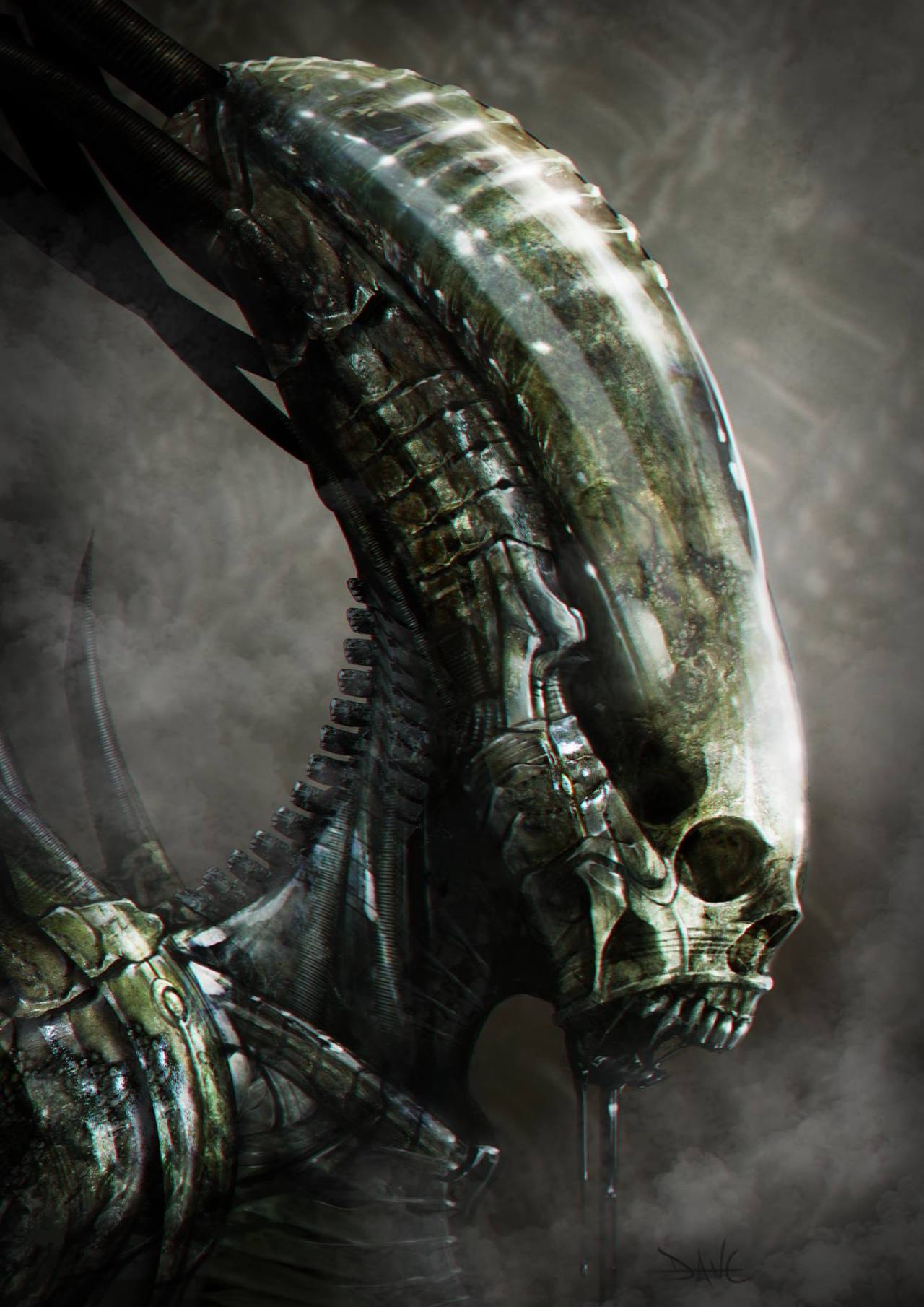 I really like that! It looks somewhat mechanical especially with those tubes coming out/going into its head.

Has a varied array of work that he has done in the past their is no real set type of work that he has worked on.  However creature design and concept/sculpt work for Props seems to be more his thing.  He pimped up bikes etc for the latest Madmax movie.

Here is some of his model work

The above was a concept work for a 2011 planned movie Paradise Lost a movie based of the John Miltons Poem.. This concept was for Sin. His work on this canceled project was Creature designer.

Therefore i would assume his role in Alien Covenant would be as part of the design team to work on Creature Design and maybe other Bio-Mechanical elements we see and maybe even any related Props/Suits etc.

Is also a member of the Art Crew, but his work suits more to illustrator/storyboard artist, i would assume his work would be to help Ridley with Story-boarding.

Is someone who has played a bigger role in a lot of his work and i would assume he plays a large role in Alien Covenant, most of his work is Character/Creature Concept work but he has worked on other Concepts.

He does some Illustration work and he works a pretty broad spectrum as he does Characters/Creatures .. Props/Vehicles and Environment work.

But as a lot of other Artists seem to work on those concepts, i would assume Jeremy Love could be designing the Characters as far as Illustration and Space Suit designs, Weapons and other Crew Props and maybe he could also work with Engineer designs and Technology should any appear in the movie.

Is a artist who mainly concept designs interior and exterior work and even builds scale models, and so it would be safe to bet that he could be working on either or both of the exterior and interior look to the Ships and any Engineer Buildings they find. 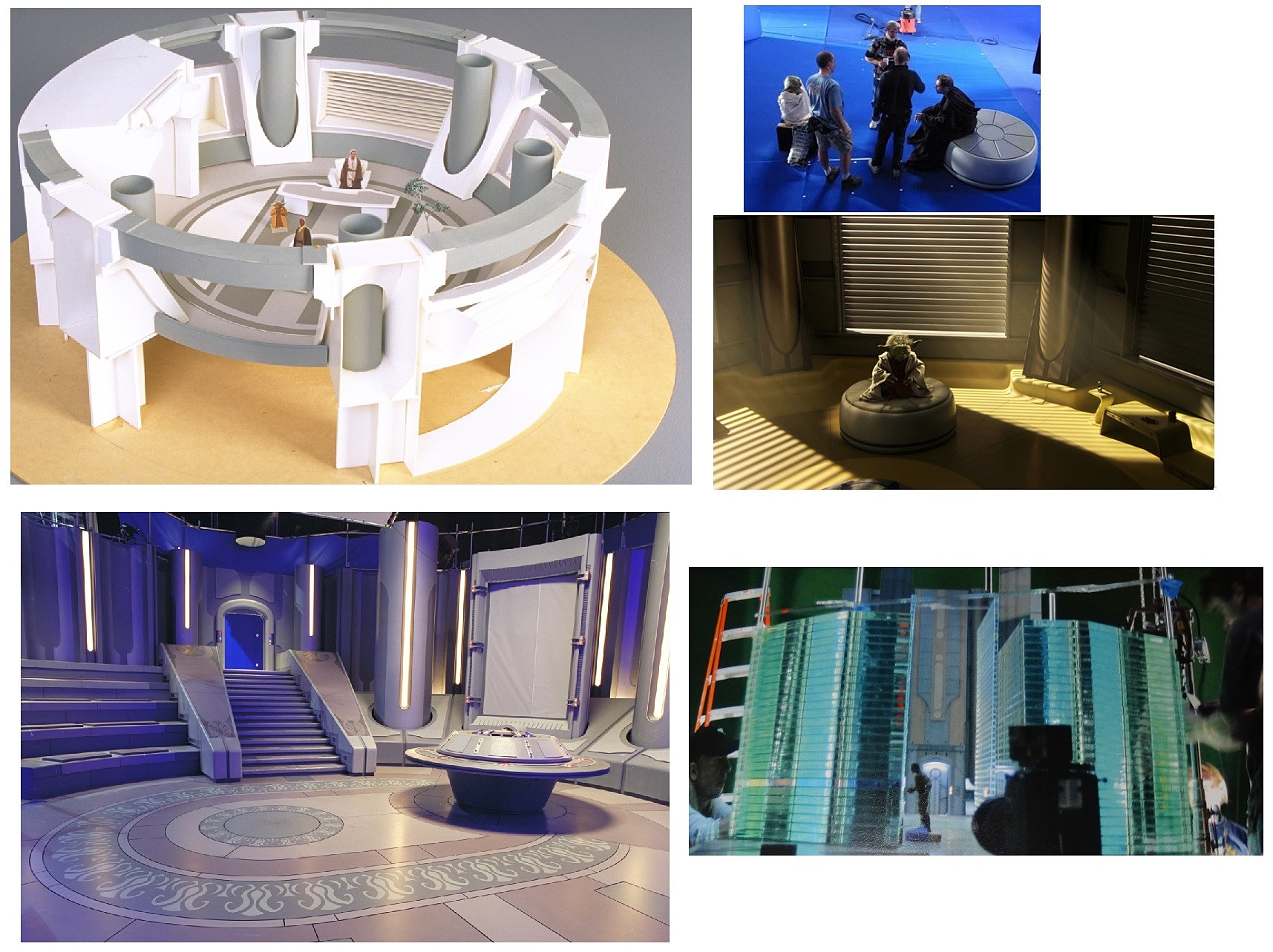 is similar to Geoff but he has not worked on as many projects so i would assume he would be assisting Geoff in making and model sets and helping to design larger interior and exterior sets.  As most of his work is a Set Decorator.

so thats the main credited Art Department as far as Concept/Illustration work goes, the others are mainly cosmetic.

so from this i would ASSUME..

Steve Burg: would be designing the Ships/Vehicles and also some of the Landscape Architecture.

Evan Shipard: would be working on the Environmental Concept Designs and Background Matte Painting work.

Dane Hallett: would be working close with Jeremy Love as far as Creature Designs and Model work for Props for Equipment/Weapons and Bio-Mechanical Props we see.

Jeremy Love: I think would be involved heavily with Character Designs as far as Equipment, Look and Costumes/Space Suits as well as maybe some work with any Xeno/Engineer related Design work.

Matt Hatton I think would be primarily helping to put all those artists ideas into Storyboards.

Geoff Kemmis and Julian Scalia will both work on concepts for exterior and interior designs of both Architecture and Space Ships including Model making and decorating work on sets.

Let me know guys/girls what you think?

I am thinking about something.

What if they knew that the Prometheus mission messed up so they won't make as an expensive ship like this but also not as cheap as the one that we see in the original Alien (1979)? The ship in Alien would be an even cheaper ship than Nostromo since they knew that both Prometheus (the ship) and the one in Alien Covenant failed.

Someone here mentioned that they felt that Prometheus got too mixed views so they would maybe try to go back and make a movie closer to Alien. I hope that they won't make it a copy of Alien but that it will tie closer to the original Alien movie. Like I said before the characters are the most important things but visually Prometheus was very good.

This made me think this could fit in nicely with Alien Covenant, if you look at the Vegetation it has a similar look to what Fire and Stone had..

And so when i saw the image first posted i also noticed the Obelisk type monument in the center and what looks like a Green Eye, or center part and to me the thought that came to my mind was...

Tree of Life, or Tree of Forbidden Knowledge if this was a concept work for Alien Covenant (which it is not) it would have fitted perfectly for being the Tree of Knowledge/Life and the Source of the Goo

You will have to view first image in new window to get maybe a more detailed look.

Then if you look above the Monument you can make out what looks like a Cthulhu  kind of Head, which also actually looks similar to the Fresco Creature in Prometheus Head and O'Bannons idea for the Alien Star Beast.

I was going to put the image as a prank and let you think it was real concept work... but i would not do that lol..

However how fitting a image it is..... you  could be mistaken to think it was from the Movie.

Years back Ridley Scott let go that Blade Runner and Alien were in the same universe. Scott is producing both Alien: Covenant and Blade Runner 2049. I would think that the look of Earth during any Alien: Covenant sequence would look dystopian similar to what you see in the Blade Runner 2049 trailer.

As far as the look, has anyone else been reminded of Metroid Prime, the Chozo Ruins, when looking at the Engineer temple images? I'm not just trying to talk about my favorite game...the helmet display also reminds me of Prometheus. (Michael Mann produced this game).