Disney Buying Fox: What could it mean for the Alien Franchise?

I was very surprised to read the news, but it seems to be a matter of fact that 20th Century Fox, now known as 21st Century Fox, is going to become part of the Disney Empire. That probably is going to mean something (or more than something) for the productions that are currently in development at Fox. Disney has a very much more successful track record at the box office than Fox, and it is not likely that they are going to put their seal of approval on productions that have a dubious mass appeal. My personal feeling is that Disney will probably try to revamp the Alien franchise, xenomorph and all.

27 Responses to Disney Buying Fox: What could it mean for the Alien Franchise?

They'll rehash Aliens over and over, make Ripley a Disney Princess, not take any risks, and throw in plenty of jokes for good measure.

Lawrence of Arabia Who knows. I think Disney will try to protect somewhat the profile of 20th Century Fox. After all it is one of the studios with most history in Hollywood. However, they will be after the money for sure. 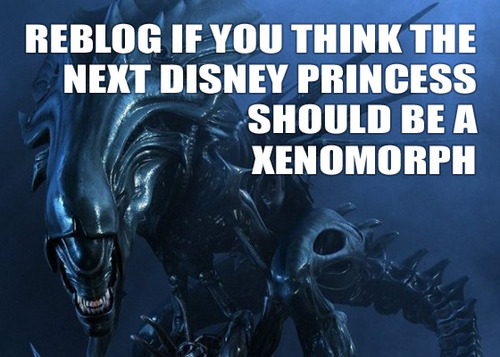 Lawrence of Arabia - Perhaps this is the best image to describe the situation:

You struck gold with that girl lol She looks like my nieces doppelganger.

Lawrence of Arabia - :DDD - You can find her in the pterodactyl topic by Dark Nebula right under this 21st Century Fox thread: If Disney buys Fox,they wouldn't keep Alien.R rated sci fi horror isn't there game.Remember they initially didn't even want Indiana Jones because the series lacked the same appeal as Star War(not relevant with a younger audience)They bought it anyway of course.There's nothing they can do with Alien,just simply doesn't fit their family friendly vision.Avatar X Men Fantastic 4 yes.Alien and Apes will have to seek new homes

Just read more into it.Those with more knowledge of the talks confirm Disney would NOT purchase all 21st Century Fox properties.Calm down guys,an Alien film will never be released underneath the Disney banner,case closed.

MonsterZero I will deadest cry if they turn the Alien franchise into Star Wars Force Awakens. You missed the tweeny can-do politically correct speaking chippa of a lead character, and he/she's Jar-Jar like sidekick.

Lawrence of Arabia What I heard on the radio was something different. Maybe the talks are over because they bought it already? They have so much money... In the meantime Marvel fans are really excited they will finally have their X Men characters in the same universe. And Star Wars might get the music from the opening back.

Even with this year’s poorly received Alien: Covenant, the Alien franchise is a Fox property that, unadjusted for inflation, has taken $1.5 billion at the worldwide box office. While Disney doesn’t tend to put out this kind of R-rated content, preferring to generally dominate the more family-friendly space, this is a potentially lucrative cash cow. Disney has previously embraced and showcased the iconic status of the Alien franchise as it featured prominently in their Great Movie Ride, which opened in Disney Movie Studios park in Orlando, Florida in 1989 and closed in August 2017 - Disney knows the Alien IP has huge awareness and a strong heritage.

Planet of the Apes

With the next installment in the Predator franchise hitting theaters on March 3, 2018, this sci-fi action franchise is clearly considered to be a still viable proposition at the box office. Unadjusted, Predator movies have taken $584.1 million at the worldwide box office including two Alien Vs. Predator entries - although maligned by critics, they are the two most globally lucrative. As with the Alien franchise, and Die Hard, it’s another that fits into the box marked “Disney doesn’t tend to put out this kind of R-rated content,” however, it could be another one that would see the Touchstone and Hollywood Pictures brands come out of retirement and ease a path to theaters. If Disney didn’t want to carry it on they could sell it on to someone who does. If the deal happened and FX was part of it, the small screen could turn out to be a great place to move the Predator franchise forward on more modest budgets."

Disney are keen on the Avatar franchise though

You know what this means, don't you?

If Disney takes on the Alien franchise, it will probably become a wholesome action sci fi tour de force with modern social messages and coming of age themes for the whole family to watch (except old grumpy farts like many of us).

Oh no they would surely Milk this COW!

Ridley Scott wanted another 6 movies... Disney will give him 12 lol

But seriously as ninXeno426 stated, i am not sure Disney would be interested in a Action/Horror Genre like the Alien Franchise.

I hope that Disney leaves Alien Covenant alone, and doesn't make any sequel. David's story in Alien Covenant deserves to be the final stamp on the franchise, especially because of David's link to Upworth and Ricks

Ridley Scott does as Ridley Scott pleases, I guess, and in a long interview with Filmophilia Scott revealed a few details about his plans for Prometheus, including that the tie-in to Alien might be a lot more vague than we expected. Here's what he had to say when asked directly if we would again see the xenomorph in the film:

No. Absolutely not. They squeezed it dry. He (the xenomorph) did very well. (He laughs) He survived, he’s now in Disneyland in Orlando, and no way am I going back there. How did he end up in Disneyland? I saw him in Disneyland, Jesus Christ!

The Great Movie Ride closed on August 13, 2017, becoming the last operating attraction from the park's opening day to close.

"Next, the ride vehicle continued into a darkened corridor of a seemingly abandoned spaceship, revealing itself to be the Nostromo, the doomed vessel from Alien. The ride vehicle passed an audio-animatronic Ellen Ripley (Sigourney Weaver) holding a flamethrower as she prepared to confront a creature lurking within the ship. Guests could also hear Jones, Ripley's pet cat, meowing in the darkness, as well as the Nostromo's "Mother" computer warning of an imminent ship self-destruction countdown. Hearing this, the gangster or the bandit became nervous and sped the ride vehicle through the ship, but not before the Alien appeared and attacked the guests, popping out from both the ceiling and the wall." Would Ridley Scott work with Disney for a Disneyland version of Alien? I seriously doubt it.

I don't know... I think Disney would HAVE to make some, like, adult oriented flicks. Maybe they shift over what they can/want to into the, "family-friendy," category and then leave the rest in, like, a seperate division?

I definitely know that Disney wouldn't want to waste so many movies, franchises, and ideas by just haulting production or switching genres/audiences. IF this deal gets done, we will all be in for one hell of a ride.

cuponator3000 I agree. I don't see there is a reason to freak out. If they are trying to buy Fox is because they are interested in that Studio's property franchises and profile, which is more adult oriented. They would like to keep it that way. Luckily Disney have made plenty of successful films for adult audiences. I think the franchise is in good hands. http://www.comedycentral.co.uk/movies/articles/35-films-you-had-no-idea-were-disney-movies

Enemy of the State was great with Ridley Scott's brother Tony under Disney.

O Brother, Where art Thou? was great too from The Coen Brothers under Disney. If only we could introduce Mr. Jeffrey Lebowski to the Alien franchise.

John Carter, Disney, a dumper that killed the budget for another Tron sequel. And by dumper, I mean an elephant pile mashed across the movie screen, in your popcorn, the car stinks from the ride home...the kids are crying, the dogs are howling...please help me because someone took a dump under my eyelids..

I also agree that Disney will give us the more Pop-Corn Style Franchise and so if they take over it depends what kind of deal is Binding with RS and FOX and how any Future take over of FOX has a effect on what FOX may have agreed with Ridley Scott.

I feel Disney would be more willing to push a Blomkamp Style Alien 5, than Ridley Scotts AI Alien Covenant Sequel, this is not to say Alien 5 will come first or at all, just that some of the things RS may want to follow could be thrown out in favor of the more Pop-Corn Fanboy Elements from Alien 5

Hopefully Alien Covenants Sequel would Evolve into a More Rogue One than a Force Awakens kind of Flick.. by that more Darker Tone than a Family one...

I want to see a Alien Covenant set of Sequels pushed at the Age 15 or higher rather than for 12-13 year olds.