OvomorphMember0 XP02/15/2012Ok, we all think we know what the jockey looks like, right? A human body with a hunchback and an elephant's head? Well here : http://www.avpgalaxy.net/forum/index.php?topic=41273.0 Ridley states that, to quote: ''Therefore, who is that, inside that suit? That wasn’t a skeleton, that was a suit. And if you open up the suit, what do you get inside it?'' So, if that's not a skeleton, then what the hell does the real jockey look like?
11 Responses to Jockey appearance

OvomorphMember0 XP02/15/2012If it's the tall (guy) standing by the SJ chair as it spirals up out of the floor, in the trailer, then its a bug-eyed alien. I think he's activating the chair. Look closely at his eye's. They're not human. He looks like a stereotypical little green (grey?) man alien from the '50's only taller. He looks pretty buff in the trailer, so I'm wondering if that's Patrick Wilson. He gets into the unoccupied chair, which grows around him, and is later chest bursted. Just theorizing wildly again here... 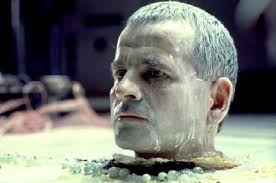 OvomorphMember0 XP02/15/2012Sorry to be negative but the more I think about the SJ outer form as being a mere suit, the more I think I will be dissapointed by this film and ultimately will wish that it had never been made. It just seems like such a cop out to me. The SJ scene in Alien is one of the best parts of the film; the idea that this bizarre and incredibly advanced lifeform has been dead for millions of years on a remote planet in the vast expanse of space always gave me a chill. It really did make me feel very small indeed. For this to be explained as a tall blue humanoid in a suite just doesn't seem right. I am hoping that the blue guy is seperate to the SJ but I suspect I will be dissapointed.

OvomorphMember0 XP02/15/2012well suppose the sj is a suit then the implications can still provide a very good story and who knows whats up ridleys sleeve. As stated before he intends to show us something we have never seen before,.. now that could be the occupant in the suit or something entirely different and again he also stated he's locking all the best stuff away so i think a few surprises are in store and i have a sneaky feeling it will be a great film regardless.

OvomorphMember0 XP02/15/2012I'm quite looking forward to the after event analysis on here to see what the general consensus of opinion will be after we have all seen the film. I doubt that all will be pleased but the debates will be interesting.

OvomorphMember0 XP02/15/2012@ snugs i too believe the space jockey scene was awesome and scary at the same time!!! But as much as i would like it to be one thing i trust Mr Scott to do us proud!! Don't worry it is going to be [email protected]!*ing awesome what ever or who ever the space jockey turns out to be!!! Trust Me!!! OvomorphMember0 XP02/19/2012@snugs: I too always thought the original SJ scene with all of it's (original) implications gave us (the viewers) a real sense of the vastness and the mystery of space. There sat this huge thing, like nothing anyone but Giger had ever imagined, sitting perpetually in it's chair... What was it's story? Why/how did it die? And the bad ass part is... It's not even addressed any further! Ridley just uses it to establish the real nemesis! If it's nothing more than a mutated human who gets in a suit... Well we've all seen that before... Guyver. We've seen smaller Greys use them in ID4 too. It needs to be something we haven't seen before... Something worthy of the vastness and mystery and the untold millions of stories... of space. Here's hoping.

OvomorphMember0 XP02/19/2012Have any of you considered that Ridley might actually be giving us some spin in that quote..? There is a war of misinformation on the part of the studio. I wouldn't put it past Ridley to say 'yeah its a suit' and 'there wont be any xenos'... It is very possible that we will see the xeno that lays all the eggs... Its possible that any of the theories are correct or not correct. I'm just saying... Ridley could certainly be taking us for a ride. After watching Alien a billion times, I just don't see how the 'space jockey' could be a suit. It is clearly a creature with a ribcage and a xeno/something bursts out of it before they ever set down on that planet. Furthermore, we have already seen a photo of another space jockey dead, on the floor of the ampule room. It is visible in the very first poster. I have a difficult time believing this is a suit. Although I wouldn't be surprised if the jockey is a huge humanoid alien, who fuses with the chair, which could be considered a suit. Man we need something to talk about. Ushbuck leaves for a day and I'm reminded how long it will be until this film comes out! Back to Skyrim...

OvomorphMember0 XP02/20/2012I geeked out last night and watched some of the old behind the scenes features of "Alien" on youtube. Watching those features, listening to Ridley's, Giger's and others' comments and line of thinking...it really gave me great faith that this movie is going to be awesome. Even if the space jockey explanation isn't as wild as some people hope it to be, I think Ridley is going to give us so many things to think and talk about! He really only scratched the surface of some of the themes and ideas he and Giger had flying around in their heads. Now he has a movie with a MUCH larger budget, and a studio who knows that their director is the MAN when it comes to this movie. As long as he can edit and sign-off on a movie and rating that HE is happy with, this should be a masterpiece. The visuals will be stunning too now that he has 3D to play with...those corridors will run into infinity - goosebumps baby =)

OvomorphMember0 XPFeb-25-2012 7:05 AMWell, I just watched some of the pictures found under the media link on top of this page. Look at what is in the corridor behind N. Rapace, 2 SJ suits, standing on some kind of small platform. That would definitely put the question aside wether SJ´s look elephant-like or if someone maybe crawls into one of the suits infected by a Xeno during prometheus, ending up in the chair in the control room. Maybe trying to start up the ship, dying giving birth to the Xeno and the ship crashes down as seen in the trailer. Just drawing conclusions from reading on several posts. Maybe this is already adressed in another post ?

OvomorphMember0 XPFeb-25-2012 11:27 AMI think making the original space jockey just turn out to be a suit was kinda' original in Scotts' part. I give him credit for not trying to play it safe.

OvomorphMember0 XPMar-12-2012 10:59 PMMala'kaks are different from engineers!!!!! mala'kaks worship engineers, and the reason the suit is melted to the chair is because its biomechanoid, so it has tendency to rot like skin, when flesh rots it sticks... especially large amounts!!! underneath the suit is an elephant creature, not a bald man! that body in alien is a body, it could just be another white lie scott told to suprise fans that they actually are elephant biomechanoids!!! there is much proof explaining this!!!! if it is a suit, it is a graft suit, like in metroid. it is an organism that sticks. those 2 pilots in my pic are most likely statues!
Add A Reply
Log in to Post
Scified Network
Godzilla-Movies.comHosted Community
JurassicWorld3.netHosted Community
Alien-Covenant.comHosted Community
AliensVersus
Predator.netHosted Community
Predator4-Movie.comHosted Community
New Alien: Covenant Forum Topics
More New Topics
Highest Forum Ranks Unlocked