The candles used in the Satanic rituals represent the
light of Lucifer - the light bearer, the knowledge, the
living flame, the burning desire, and the Flames of the
Avern.

In Rome wax axes were used in the pagan sanctuaries that
were specially offered in the Saturnal. Also the lamps
that appeared among the insignia of the prefects of the
praetorium in century IV were wax torches placed on
candelabra. Gemini - Yellow

2- The purpose of using a meat altar is to serve as a focal
point in which the attention of the participants will be
focused throughout the ceremony. In a satanic ritual, a
naked woman is used as an altar since the woman is the
passive recipient by nature, and represents the mother
earth.

3- Incense as an offering to the gods.

The phallus is the pagan symbol of fertility that
represents virility and aggression. [David stabbed Walter with a flute]

PARCHMENT: A parchment is used because its organic properties are compatible with the elements of nature.

6- A quill pen, with it you will inscribe your name in blood.

7- THE HALL OF HEADS: the giant completely 'replaces' the old human order & Nephilim= "Fallen" were Giants who lived in Canaan. See: Genesis 6:4

Interesting.  I think you're reaching a bit though.  None of the things listed are exclusively satanic symbols.

"Better to reign in HELL than serve in Heaven."

This post made me appreciate production design even more. Most of the work these people do easily get overlooked.

Reaching, sure - but if Covenant and interviews regarding have taught me anything...nothing can be ruled out.

Satanism is a man made concept, a pure bs. And what we have here is bs within a fantasy flick, bs with a bs story. Which is fine. For that matter, I would not mind if David had painted swastika all over the planet.

But thanks for your time showing ignorant umongst us, me in this case, what concepts has been put on set and their origin. I never followed any of the scriptures and all the concepts surrounding the rituals and all that.

We don't know if the designers chose those items to specifically show satanic symbolism.  But I think the design team did an amazing job regardless.

Well of course I would never rule anything out completely.  I just think it's a bit of a stretch.  I have lights/candles, incense, a recorder (instrument), and parchment in my house, yet I'm not a Satanist.  Also, I feel like David would see the need for any kind of religion as a weakness, and he would consider himself above that.

Not 100% implied but there are many similarities to a
satanic ritual, there are many more things in the film
easily overlooked, one of them the Parable of the Wheat [Matthew 13:24-30] is very clear on the movie when I remember the wheat fields:
"This is wheat" ... "What are the odds of finding human
vegetation this far from Earth?"... "Who planted it?"
They ask themselves, the Parable gives the answer:
"The enemy who sowed them is the devil" [Matthew 13:39]

Didn't Satan want 'man' to endulge?  To enjoy earthly pleasures in volumes/frequencies/conditions not approved by his boss?  And was cast out accordingly.  Not sure if this fits, as there was little enjoying of human pleasures in the series. Unless the notion was that 'man' has already endulged, so now there is dispair commensurate with the treatment of the devil.  In this light, David would equate to a soldier of armegedon, and possibly the initiator.  If that was the intent, it's odd his name isn't Gabriel. 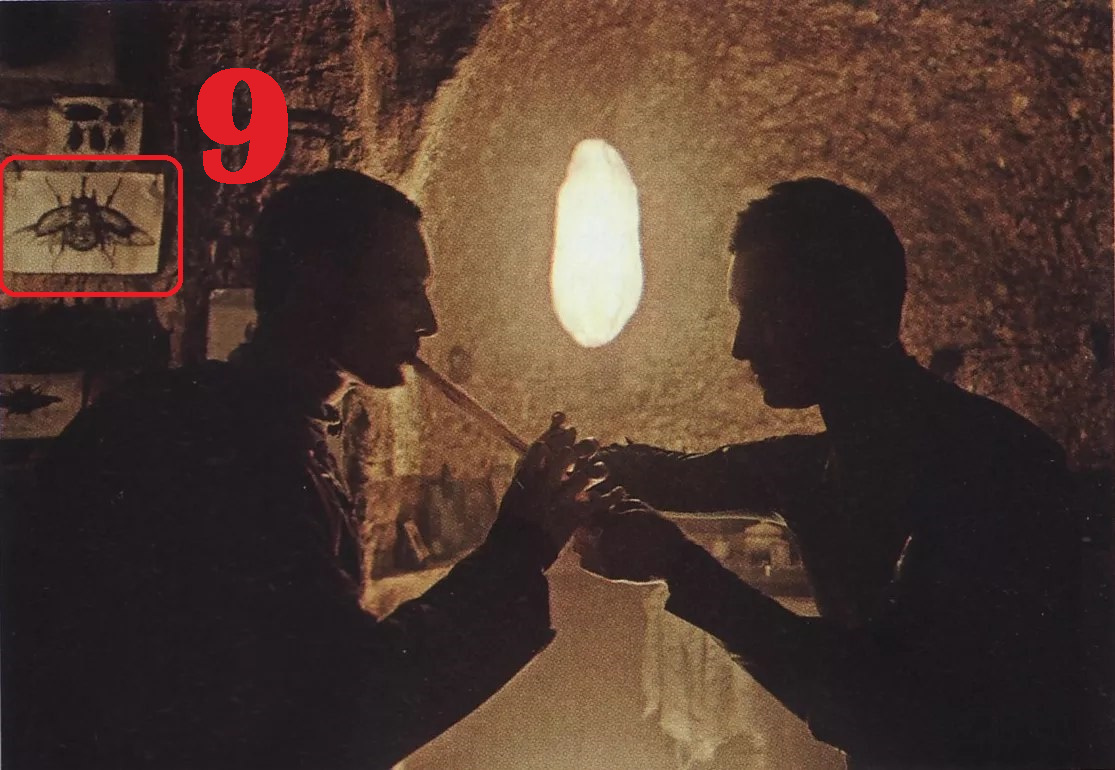 9- Acherontia Atropos: The species name Atropos is related
to death.

Wiki:
Acherontia atropos (Greater death's head hawkmoth) is
the most widely known of the three species of death's-
head hawkmoth. Acherontia species are notorious for a
vaguely skull-shaped pattern on the thorax.

As well known "In Voluptas Mors" from “The Silence of
the Lambs” movie.

The production designers were PASSIONATELY involved in these sets, and it shows. If you look at LOTS of the videos discussing Prometheus as well, there is a LOT undeniable satanic imagery, including the "666" motif (especially when the team first explores the temple, with the numbers showing up in their life support systems)

No, Satan wants people to believe God is withholding His love from them in some slight way and therefore they can do it better on their own.

Roger55 David also makes for a rather seductive Satan as well. I think it is great you see all this and can draw parallels- it makes it special to you and perhaps others. I can see and agree with some of your observations.

I am more familiar with Lavey style Satanism and that was closer to a working every day "philosophy" than anything else. It acknowledged there were no deities but using the imagery was good for making people uncomfortable lol.

Thanks for your reply I have some samples more to share, I have to assume that you and other members have found something too, if so just posting your captures here if possible, would be very interested to see them.

Roger55 No pics and I haven't read Lavey in a while, but he basically said "Do as thou wilt" which is what David is doing.