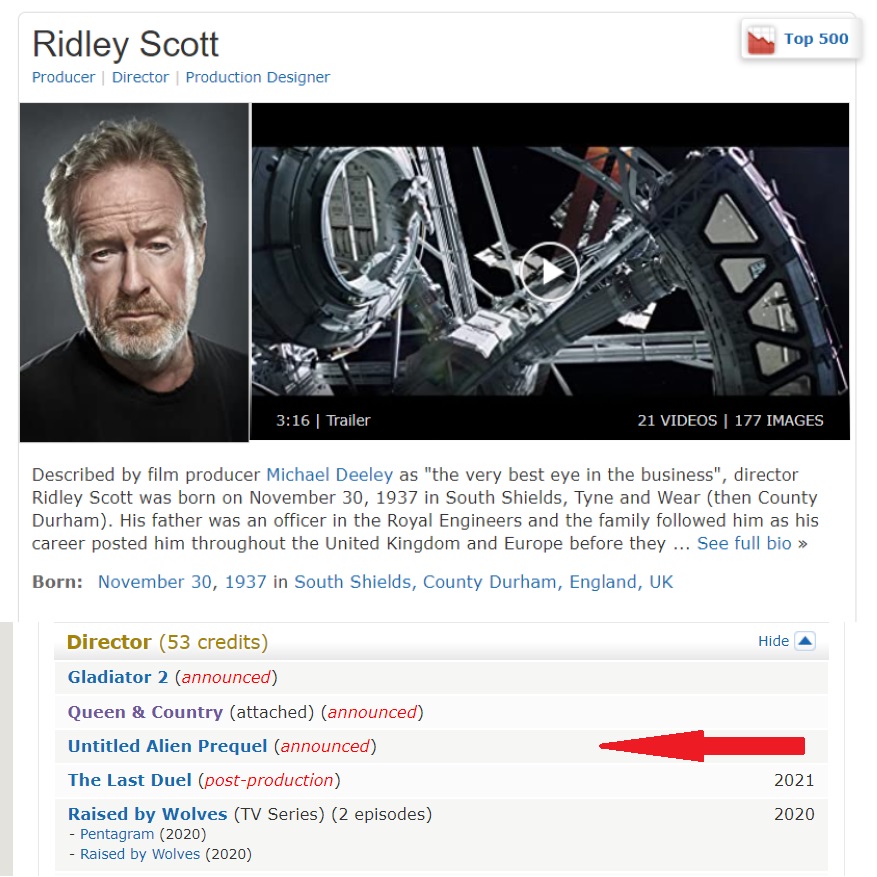 FacehuggerMember163 XPOct-15-2020 9:35 PMAssuming that after Duelists, movie currently rolling, a new Alien project has been announced, I have checked IMDB and see it positioned behind Duelists, assuming you have Gladiator II (if it doesn't drop off the list) and now Napoleon in mind. It is good to know that the new ALIEN project could begin next year. if I am not wrong in the schedule. No doubt he got a great deal of proyects out in mind.
5 Responses to About RS schedule IMDB and Alien proyect

You mean The Last Duel, The Duelists was his debut film.

Information on IMDB is not official, it is taken from media articles and rumors, so we have to wait for an officisl announcement. Until now we have nothing.

Unfortunately it can mean more about David if Scott is involved. I’m not very excited about this at all, have him as a producer, not director. Not sure if the information on IMDB is true but it worries me that he might make it about David again and therefore mess it up.

Having said this it's in itself fascinating to see how productive he is at that age. I can respect him for still doing this even though I’m not a fan of the alien-prequels in general.

FacehuggerMember163 XPNov-07-2020 10:56 PMThe ALIEN project has been relegated. This is precisely what I feared, ****! Gucci (pre-production) for next year. IMDB source.

Roger G: Where do you get that from? It still says Untitled alien prequel in his IMDB page.