Had A Pleasant Surprise At Work Today

So today was the first day of school (not my first day back to work, we teachers came back for professional development two weeks ago).

I finally got to meet all my new students. In one of my classes, as I walked from table to table listening in as the students completed introductory first day activities, the topic of favorite movies came up at one group.

One kid said his favorite movie was A L I E N! I was like "You like Alien!? I LOVE Alien!"(I was in disbelief that 6th graders could watch such scary movies).

Of course, the kid is all "0_o You like Alien!?" (In disbelief that we stodgy teachers could possibly enjoy or be aware of such cool movies)

Then one kid from across the room calls out "But have you guys seen Alien: Covenant!?".

OMG guys. This is a sign that it's going to be a good year.

I just really had to share that with you all. :)

22 Responses to Had A Pleasant Surprise At Work Today

Thanks, I Moon Girl . It's the simple things in life you treasure. :)

hahah that awesome VivisectedEngineer, all us uncool old farts watching these films O_O

Nice! You can test their mettle by asking which cut of Alien was better, why or why not, and how it changed the franchise- in proper essay form!

Should any students answer "Alien 3 Assembly Cut" VivisectedEngineer...set that gifted child aside for special recognition.

Should make them watch John Carpenters  The Thing that will give them Nightmares ;)

I remember i watched Alien for the first time and i was about 9 years old lol...   did not see it as a really bad horror but just one very interesting movie.

Nice to hear that a kid favorite movie is Alien. VivisectedEngineer now let's play this movie to your whole class.  :D

Haha, yet it's always the uncool old farts whom you'd least suspect (but probably should have)! Lol...well, I wish we could have in-depth conversations on Alien, but it seems like the extent of that kid's ability to elaborate on his fandom was "...I like the alien because it has an extra little mouth that shoots out." Still, good taste in movies for a kid!

Lol! When I got home and told my husband I had A L I E N fans in my class, his first response was "Haha, don't play favorites!"

Haha, that's awesome! I saw Child's Play once when I was like seven, and it didn't scare me any, but A L I E N really would have because I had a legitimate obsessive phobia of UFOs and Alien abduction at the time.

Haha, in my dreams, Jonesy! Last year I showed Willy Wonka and one kid was just horrified. I'm not out to traumatize anyone's kid, lol.

Second day of school, I'm super tired y'all! Not going to stay up all night on the forum tonight!

But, earlier today one of the A L I E N fan kids got a case of the giggles, and couldn't get it together. I told him "Good thing you weren't drinking milk or it'd be coming out of your nose right now. ...You'd look like that broken robot in A L I E N."

Obviously that exacerbated his case of the giggles, lol.

That is really uplifting :-) Have them in pairs, as a project, and have one blow into a flute and the other finger to inspire creativity! No need to thank me ;-)

That's awesome, I've been watching these movies (Predator included) since I was like 7 or 8, and I've a couple of friends who like em as well, I'm sure I'm one of the younger ones around, if not the youngest one in here btw,  I also had an argument with one of my teachers about how good Prometheus really was lol.

That's funny because when I was in second grade... everybody and I mean EVERYBODY knew about and/or seen Alien Vs Predator. That's the power of that movie

wait. you guys are all adults? i am in eighth grade. no joke.

saw alien when I was nine. loved it.

from then on, I convinced every person that i knew to watch the whole series. now, I think it would be safe to say that Our school has the largest blade runner/terminator/alien fan base of children in the state of wisconsin. witch, again is not saying that much.

witch, to be fair, is about 8 people. still we are a pretty serious fan base.

i personally collect the drinking birds to put in my room. 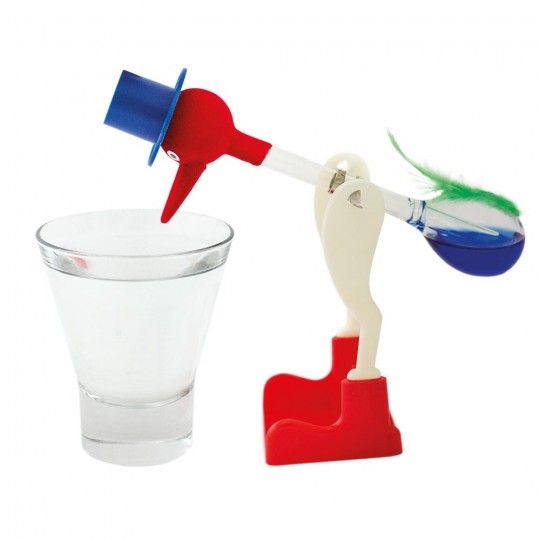 Wait I'm not the youngest then!,  I'm a senior this year, but yeah I've liked them movies since I was in like 3rd or 4th grade

Awesome! These are the children of our future! They will face the monsters of Mars and the creatures of the moons around Jupiter! :D They will know everything they need.

I envy you VivisectedEngineer, everytime I ask my students about their favorite movies I get "fast and furious" as answers.

Good stuff. Nice to have gifted students in your class ! ! !

Eww fast and the furious are ****, teach them to watch good movies.