After dk's topic Red Meat- You can only choose one to watch: Prometheus or Covenant

Here is another movie vote; and because im prick we get pick between these 2 favourites :p

Of all the films these 2 seem to have the least love.

So show us your love, not your hate!

32 Responses to Off Meat: You can only choose one to Watch: Aliens or Alien Resurrection

Alien Resurrection for me

I don't hate Resurrection (I think it's fun) but my vote goes for Aliens of course.

I was tempted to say IRaptus, there is no moral equivalence!!!!

joylitt I enjoy them both, for their own reasons. Aliens has a more exciting story but Resurrection just has a really slick artistic style about it.

OP- I definitely have to say Aliens- Director's Cut. I like AR just fine, but having to choose, it seems pretty obvious to me.

BTW- when will we ever see the final creature NOT get sucked into space?

Ressurection! It's a bit mor eout there. Both are movies I enjoy, but why not go for the weirder movie!

I really haven't sensed much hate for Aliens around here, but AR- yes. I would urge haters to give it another go as there is some of the darkest material of the Quadrilogy in there.

I enjoy both but I've got to go with Aliens because Bishop. :)

This isn't even close. 1 of the best in the series vs 1 of the worst.

VivisectedEngineer Aliens has so many good one liners- Have you ever been accused of being a man? No- have you? We have nukes, knives, sharp sticks! The list goes on and on!

dk wow dk you haven't been reading all the posts then. They will show up, just wait an see.

Im actually surprised by the lack of love for Aliens in this forum. Like you said dk, not much hate (except for the Queen) but there are few that come out guns blazing defending this film.

Aliens is the best gateway film into the franchise, or at least it was when I was a young fella. As the one-liner heavy, fullbore action, shoot em up film of the franchise I thought it would still be a hit among the younger members???

Please don't tell me AVP are the gateway films these day gaaah!

joylitt If you mean Aliens hate- this came up last winter and most I saw were ok with Aliens as long as it wasn't compared to Alien.

I can understand AR is not everyone's cup of tea(UK), cup of coffee (USA), or here in Australia we just pour em both in together.....

But where are the Aliens fans....not haters. Come on defend your film!

dk Yes, Aliens hate. Aliens is Covenant hardcore fans' favorite target. The queen gets a lot of hate. Which is ironic, because it seems Ridley Scott wants to bring her back.

joylitt It seems so although I have heard the word "queen" may mean something different from the one in Aliens.

I don't hate Aliens. It's a fun movie. Not on par with Alien or Alien 3 assembly cut in my book, but OK. Alien Resurrection is just wacky. If I am in the right mood I can watch that one, but I have to say Aliens would be my pick, just because of all the cool hardware.

IRaptus I officially love Aliens- it was the first Alien movie I saw and it was on VHS. It was one of those unexpected "planets alligning moments" for me in 1987. I didn't even see Alien until I saw Aliens, A3 and AR first.

NinXeno426 could almost deliver a dissertation on Aliens- he likes it so much.

dk I know what you mean. However there was only one queen unless Hudson was in the closet. lol

Aliens for me, but I think Alien: Resurrection has scarier parts.  I still love the rambo attitude of Pvt. Vasquez and I loved Bill Paxton's character.  Aliens gets me pumped!

Aliens for me too, but I love the clone Ripley character in Resurrection.

dk Aliens was the first of the films I saw too. I started watching Alien 3 when I was abit too young and it scared the **** out of me, so I stopped. Not long after I watched Aliens and was hooked on the franchise from then on.

Perhaps you feel safer watching the film with the Marines first lol.

ALIENS definitely. I like AR but in terms of viewing experience and memory, Aliens is a Hollywood classic. I remembered the first time I saw it in my uncle's home I was blown away. I even like Aliens more than Alien back then. Indeed as time goes by my love for Aliens has diminished, but I have to admit that without ALIENS, others prequels/sequels may not deserve a better love.

aliens by far. there is something that has always bothered me in alien resurrection. I think its mostly the creatures. look at this image of a chestburster at the beginning. 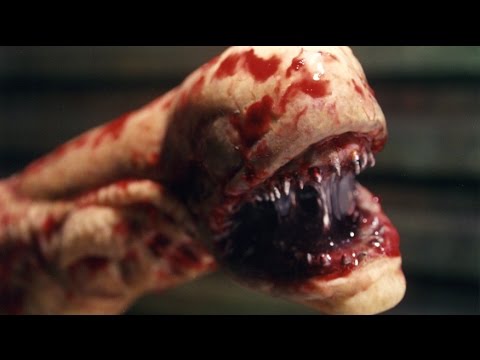 they do not look like chestbursters to me and they look much worse than all the other designs. the regular xenomorphs are so slimy you cant see their biomachanical creatures and it takes away their beauty in my opinion. here is a comparison. 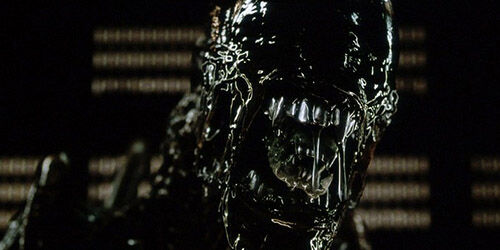 the one really cool scene to me is when the xenomorphs are swimming.

I have always hated the newborn from the moment I saw it.

I also felt like the acting from sigorny weaver and winona ryder wasn't very good.

queen isn't bad, just has nothing on eggmorphing.

Is the next artical going to be alien vs alien 3. I feal that there is not really much to discuss although I like alien 3 assebaly cut just as much as alien.

I love the first queen scene in AR. The way the camera pans from the scientists to the queen is so dope.

btw I think ALIENS vs ALIEN3 would be a great comparison.

Lol, I actually quote all the A L I E N movies, all the time - but not even the quotable lines.

Like, a few weeks ago my car got wrecked and my husband said the insurance company would probably declare it totaled.

So I said "Yeah. It could be re-worked, but it will never be top of the line again."

When I quote something that gives people pause because it's just too off topic or too much of a non sequitur, I simply say