Go to the theatre and watch Alien Covenant again!

Let's build a better world together! :)

Let's love each other! :D Sorry.  I won't waste my money on that movie ever again lol.  I am not even going to buy the blu-ray.  And, if there is another Alien movie; I am not going to go on opening day like I did.

I am actually watching the Pirates of the Caribbean movies, so we can go see #4 tomorrow.

I really do hope, it can get over 200 million (its a reach at this point now), because the series needs proper closure.

So let's talk about something not that much better but certainly chewier: the "Alien" movie, "Alien: Covenant." It has divided critics and viewers, and it frankly divided me.

To say why, let me go back to the original Ridley Scott picture from 1979. 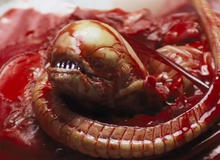 There's no way to forget the title creature. Designed by H.R. Giger, it was the sum of all fears, the mascot of the subgenre called "body horror." The alien impregnated its victims, who gave birth in ways that still make you sick. It was steely and drippy, bio-mechanical, a fusion (in the words of one designer) "of phallic symbols and motorcycle parts." Some people wondered, "How did such a killing machine evolve?"

I didn't wonder, actually. It was basically a pop-up scare movie made ingenious – invasive -- by the way it worked on primal fears of violation. Primal fears don't need rational explanations.

But blockbusters need sequels. And so there were three, and then, in 2012, Ridley Scott returned for the fifth "Alien" film, "Prometheus," a prequel set decades before the first one. Many people complained that it lacked, well, aliens.

"Alien: Covenant" has them, along with plenty of screaming and splatter for the fans. It's a charnel house -- almost everyone is eviscerated! But the focus isn't on the alien; it's on Michael Fassbender as an android named David, who hates his creator enough to become a Nazi-like scientist and design the perfect human-extermination machine.

That's the hook in the "Terminator" and "Matrix" movies, and no less a figure than the physicist Stephen Hawking recently said he gives humans a hundred more years before artificially intelligent entities take us out.

@ati oh we will go several times, I assure you!

@colonialsoldier I would bet you think "Aliens" is the best movie in the alien series, probably?

biggest waste of 13 bucks ever , from a diehard ALIEN fan... sorry can't see how anyone can find a good movie in this, should have known better after getting bit by Prometheus...

Maybe it gets better after repeat viewings but if I see that cheesy chestburster waving it's arms again I'll cringe... I think Ridley was giving a big , purposeful SCREW YOU to his fans,

Call me negative or whatever, I thought IMO ! it was a lousy movie. And yes Alien is my top Sci Fi gem of all times , saw it when I was 9 at the theaters ( thanks Dad!!) ....

I may hit a matinee....but likely will just wait for the 4k Blu-ray.  I enjoyed the movie, but maybe not to see a second viewing so soon.  One of my friends wants to go.  He's a big Alien fan, so I might go again with him.  The first friend I went to on opening night never saw an Alien movie before....he hated the movie.