So i just saw a side menu on Scified, something to do with Twitter and giving our ideas for the upcoming Alien 5 film, so i thought i would have a go at putting a few ideas out there and hopefully other members will post their ideas aswell. Here goes.

Now, we don't know exactly what happens to the hosts body after the alien as burst from their chests, we just assume that the host dies. We know from ALIEN Directors Cut that the alien is capable of, somehow, producing some kind of reaction that slowly evolves the cocooned victim into an egg.

What if, every lifeform that is cocooned by the Giger Alien is injected or infected by it during the cocooning process, which causes the victim (after the birth of the alien) to slowly evolve into some kind of organic container for microbes or bacteria to live off and grow, rapidly evolving into something horrific? A different kind of facehugger maybe?

Who do we know from ALIENS who was cocooned and survived?

Now, we know that Ripley rescued her before the facehugger could get to her, BUT, during the cocooning process she was infected with something, that, unbeknown to Ripley would change Newt into a sort of husk for microbes to grow inside.

The beginning of Alien 5 could have Ripley witness this horrific site in Newts cryo pod and introduce us to a new kind of alien.

Has anyone else got any ideas? If so, you can post them on this thread. I'd be more than happy to read them!

If Neil Blomkamp is Disregarding A3 And AR - He should bring back Newt and Hicks. ^^ THIS^^
Hi all, very excited to talk Aliens here.

The 3 Aliens comic by Dark Horse was the sequel we wanted after Aliens the movie. Alien 3 even screwed this up though, for after it was made DH retroactivly changed the names of Newt and Hicks because it clashed with A3. Ridiculous. Hoepfully a new printing will revert it back.

You just can't in a simple way explain Ripley/Hicks/Newt being alive in this new movie while keeping A3 and A:R relevant. And this sequel HAS to stay simple for audiences to comprehend. To do that proclaim in the ads, posters that this is an alternative take continuing from Aliens. If you've seen those first two films, that's it, you're up to date!

The survivors made it home and up to this point were able to live their lives, we catch up with them now when, after years weyland-yutani (or a company that has taken their research since I doubt W-Y would still be around after what Ripley, Newt and Hicks would have reported) are again trying to use the xenomorphs. Roll film.

Good to hear from you Necro! :)

To be honest, I'm not very keen on seeing Newt again! However, I think you have a neat idea there in having Newt infected and seeing a new type of creature.

I just think that there is still an entire Giger Biomechanoid Universe out there, and it has yet to be fully mined. I'm hoping Neill Blomkamp will do justice to it!

I know we don't want to see the same Alien over and over, but what we do need is creatures which are both well designed and exectued. CGI enhanced practical effects. I would also love to see a race of Space Jockeys, or even a single Space Jockey!

Whatever criticism Prometheus has had thrown at it, Ridley did a fantastic job effects wise. I think he raised the bar yet again. He brought fine art to the screen!

Hi Lone! :) Thanx for your post! Always good to hear from you my friend!

Yes, i think alot of hardcore fans of ALIEN and Giger are a bit concerned about where this sequel will go and if there will be any further damage done to an already tarnished franchise.

I think in order for it to succeed, certain elements have to be changed or "evolved!" The Giger Alien only really existed in the original, ALIEN. In ALIENS, it was a different kind of beast imo. In ALIEN 3, 4 and them other two things that milked the cow completely dry and left a bitter taste, it became a different beast again, but not different in a good way.

I don't want to see the "Queen" again and i want to see a completely different alien but twice as scary!

After viewing Blomkamps concept art, i don't feel reasured that this will be great. We see the queen in one which makes me think that this will be "same old, same old." I hope i'm wrong! That queen has been done to death!

Blomkamp states he is a fan of Alien and Aliens, but that's kind of a contradiction to me! I love Alien, but I only like Aliens! :)

Yes, I feel a bit put off by the Queen concept art too. Smells of Aliens action movie to me and a retread!

He's excited, of course and I don't doubt he wants to put his stamp on the series....but, I'm sure David Fincher felt much the same.

Here's the problem as I see it~ Can Fox/Brandywine really, finally, put their trust in another director and leave him to create his vision? It'll be a first if they do!

@Space_339; He is bringing back Hicks, Micheal Biehn just confirmed it.

Also, it's pretty obvious Bloomkamp intends on bringing back the original cast of survivors from Aliens; Sigourney Weaver, Micheal Biehn, Carrie Henn and Lance Hendrickson, for this movie.

They need to start this movie in the present, years after Aliens, as Farseeker suggested.  The events in A-3 and Resurrection happened while deep in hypersleep as a cyber dream. The company was prosecuted for their crime against the "expendible" crew, the lies,  but something happens.

An unknown reaches out to Ripley, not a company man, but someone else.  Want an investigation.  Perhaps Ripley and Hicks have remained close after all,, they were mildly flirting in Aliens.  They live on a terraformer planet, how about that?

The only story arc left for me is weyland and yutani.
Prometheus explored who the sj was.

Its a pity they never explored the ripley 8 clone. She had many hidden talents.

A little... gross... But that's not surprising coming from Alien. Interesting idea.

Lance Henriksen? What is happening? Did James Cameron materialize next to Blomkamp and say: "It's ok. Bishop is artificial but his skin can age. Bring back all my creations?".

@Necro~ I meant to add that I love the idea of the cocooning leaving an infection, that's cool and ties in nicely with Prometheus.

That being said, I want it to remain a mystery as to how exactly the Alien does that!

Thanx Lone; My head is full of fairly good, but ultimatley useless idea's!

I don't think we would for one second actually see a child go through something that horrific in a film, after all, nobody in their right mind would want to see that in reality.

However, the Alien franchise isn't reality and it would be great if Alien 5 took the series back to it's disturbing roots! It's very Gigeresque, don't you think?

Lol, that idea isn't useless Necro! It could be one way of tying Alien to Prometheus! The Black Goo may be a form of whatever the Morb injects it's victims with!

You know how I feel about Giger's work...just the other day I was looking at some of his Alien concept art. The planetoid looks as if it's alive and the ship could be growing out of it. Same with the eggs in the silo. A harvest?

How cool would it be to see some of that in ALIEN 5? 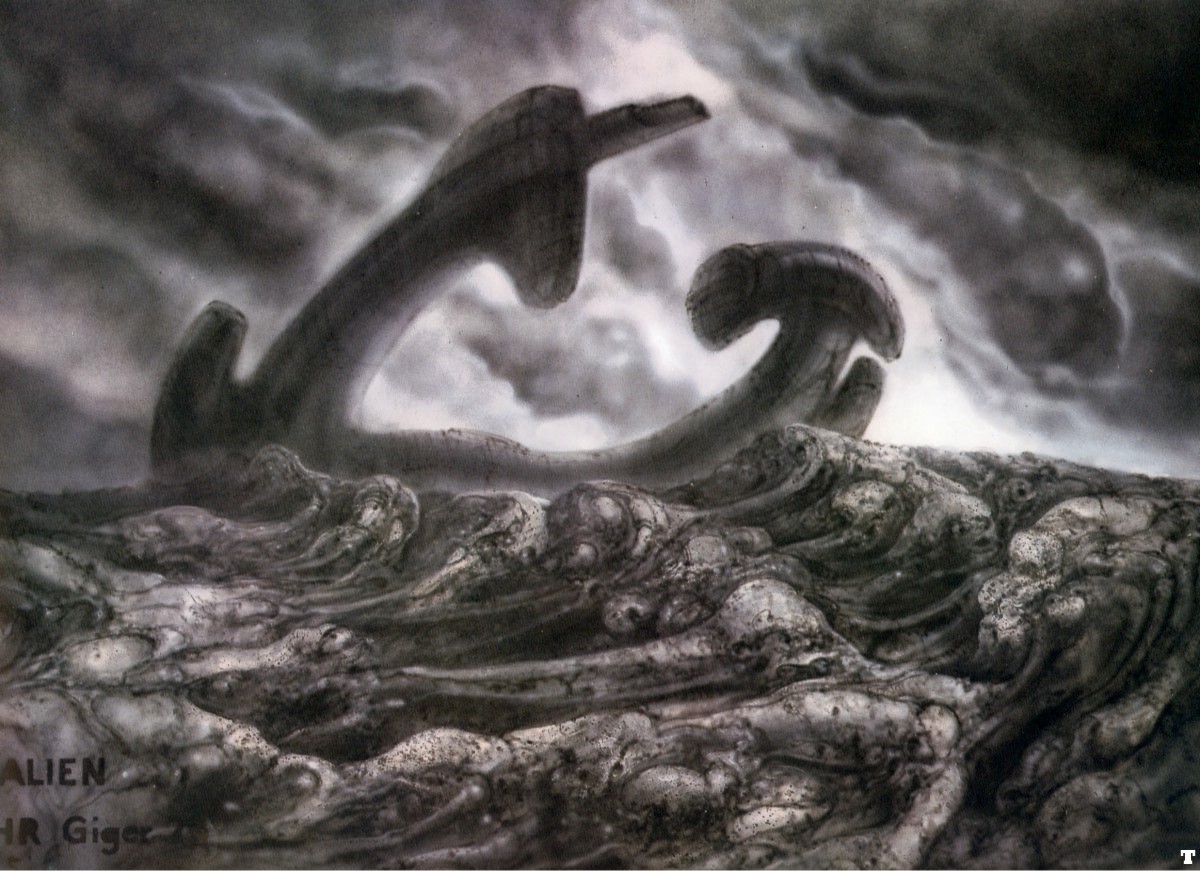 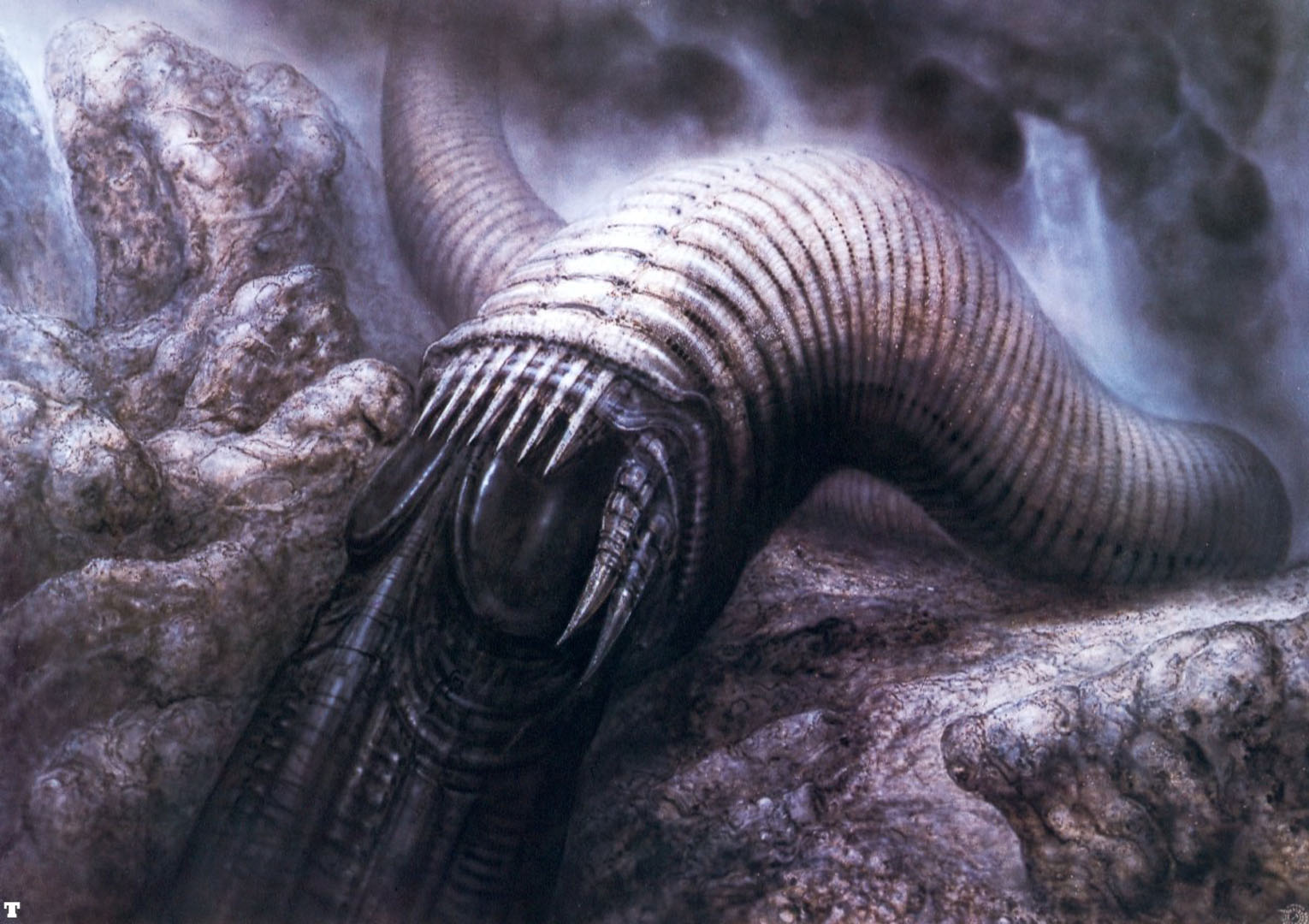 ....and take a look at these ZBrush beauties by Markus Pansegrau!