When Deborah Harry and Chris Stein presented photographs of their time spent with H.R. Giger to Heavy Metal magazine, it was decided that they should also write their own article about their experience with and observations about Giger, his success and the effect of his art. Giger, of course, was already a highly esteemed contributor to the magazine and had long been considered not only a megastar in the field but almost in a class of his own.

Debbie and Chris not only suited the general musical tastes already represented within the pages of HM, but had proven their credentials as purveyors of fantasy.

All photos taken by Chris Stein.

Read more about this on my own wee blog: H.R.Giger and Deborah Harry: The KooKoo Collaboration

Hey thanks for this great share. I have always wondered what was the subject matter of the image with the pins in the face. It is one of my most favorit of Gigers paintings.

Just incredible how beautiful it realy is and now I appreciate it even more. I wish I knew more about Gigers other painings. So much of his work is way way before its time. We are just starting to really catch up with just how increadible his art was able to show unimagined scientific processes.

All of this make me wonder how he was able to invision so much science through his art having never been one.

Thanx for sharing Lone. There will never be another one like him, that's for sure! A true artist who created everything from his imagination, who's only references were in his mind, and what a mind it was! Genius!

Lone my friend, you are one of the biggest fans of Giger, and i really hope that you post somemore interesting stuff like this!

LONE - That's absolutely fantastic! Thank you ever so much for bringing this to us! :)

It was my pleasure peeps!

I might have something else up my sleeve Necro! ;)

@Redant: two books I would highly recommend to you, both are widely available online:

www HR Giger com~ Designed by Giger, this book contains detailed commentaries where he describes 20 years of his work, from the early 1960's to the late 1990's. Packed with photos and images, of his sketches, paintings, album covers, film projects and furniture. He also talks about his childhood. A truly fantastic compendium, filled with 239 pages of Giger-Awesomeness, and one of my own personal favourites! 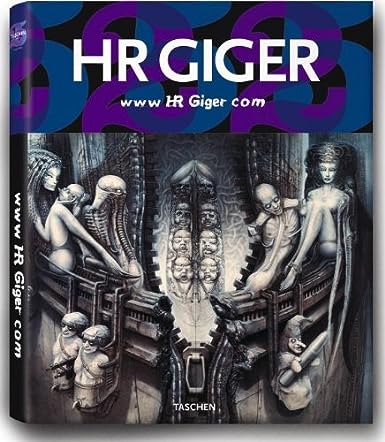 H.R. GIGER'S Retrospective 1964-1984 ~ This Retospective has 116 pages filled with reproductions of more than 150 of his paintings, drawings, and sculptures, again accompanied by his own commentary. It also includes photos of Giger at work.

*Community bump for new members and admirers of H.R Giger*