Which do you find more terrifying? The Hammerpede from Prometheus or the Facehugger from Alien?

I just posted this debate on our Facebook page and thought it would make a good debate here as well. Which do you, personally, find more terrifying? The Hammerpede or the Facehugger and why? 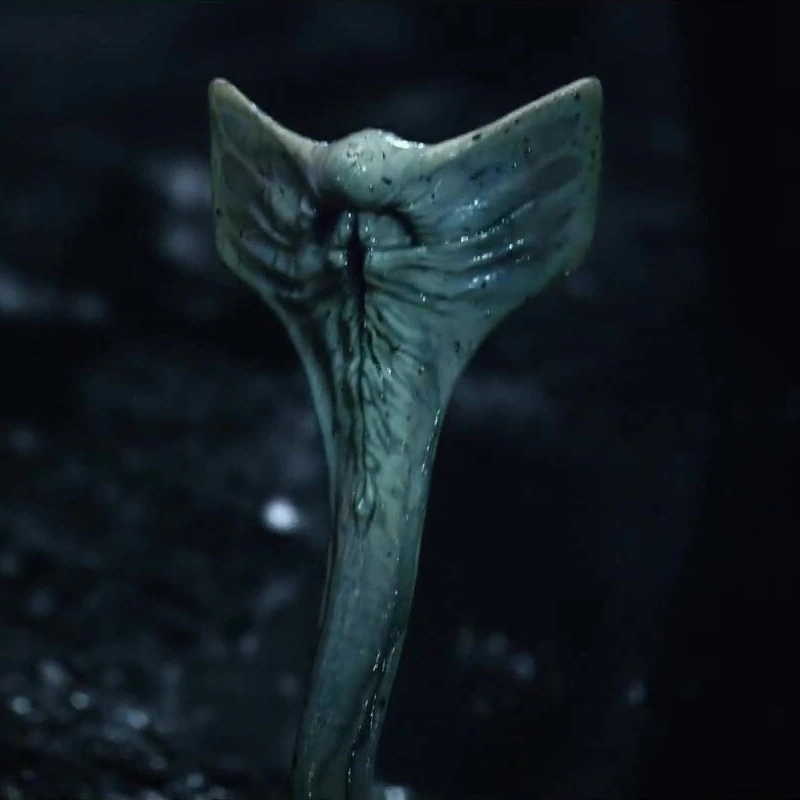 Both are horrific, invasive parasites which defyal its hosts in the most inhumane way. Personally, I would have to say the Hammerpede is more terrifying to me only because of the way it's seen to attack its host from prometheus. When it broke Milburn's arm and slithered its way into his helmet, and then proceeded to burrow itself down his throat - that to me is slightly more horrific and torturous than having a Facehugger latch on to you, knock you out and implant a Chestburster seed. Both orally violate you, but the Hammerpede is just more brutal and gruesome I found. What do you guys think? Do you think the Facehugger is more terrifying? Let me know your opinions below.

12 Responses to Which do you find more terrifying? The Hammerpede from Prometheus or the Facehugger from Alien? OvomorphMember0 XPNov-25-2013 10:48 PMHammerpede? it does not deserve name that cool...butterfly on the stick maybe but not Hammerpede.....facehugger is way way cooler than this failed attempt of a monster

OvomorphMember1 XPNov-25-2013 11:01 PMTo me, they are one and the same. Put 8 legs on that Hammerpede and 'Woila!' Facehugger. The hammerpede seems like a premature or early version of the traditional facehugger. This, of course, is just my humble opinion. Just take a picture of facehugger and cover the legs- you'll see.
THETRICKISNOTMINDINGITHURTS

NeomorphMember1566 XPNov-26-2013 5:45 AMNo brainer! Facehugger all the way! There's something very scary about those human like finger legs! It's relentless and won't stop until it has done it's job. It lives outside of the egg for only a very short while, only to plant it's seed then die. What a life. Imagine its sex milk rolling down your throat and there's nothing you can do about it. truly horrifying!

ChestbursterMember838 XPNov-26-2013 10:28 AMOh Facehugger for sure! The hammerpede is pretty scary in its own right, but I still think the idea of a spider like creature(not a big fan of spiders hahaha) orally violating me and gettine me pregnant is the one of the scariest things ever thought of. And i didn't even mention the fact that the baby bursting out of my chest while I am conscious and growing up in a matter of hours to go kill everyone and try to overrun any world with xenos is a terrifying thought. I'd definitely say facehuggers are more terrfiying

OvomorphMember0 XPNov-26-2013 12:20 PMThe facehugger!.. that thing is running all around and won't give you a rest till it is all over your face hugging you. o.o [i][url=http://avp.wikia.com/wiki/Facehugger]REMOVAL[/url] While Facehuggers have been removed before embryo implantation has taken place, the process is invariably fatal for the host.[3] The Facehugger's combination of vice-like grip, strong tail around the victim's throat and highly acidic blood makes them essentially impossible to remove safely. Even in the very early stages of an attack, few victims have managed to remove them before being subdued, with even Predators (who are notoriously strong) apparently unable to fend one off once it is attached. It is possible a Facehugger's legs may "lock" once wrapped around a host's head, possibly in a manner similar to rigor mortis, which would make simply pulling it off nearly impossible. While a victim could conceivably lift the creature off like a helmet, the Facehugger's powerful tail prevents this.[/i] [img]http://static3.wikia.nocookie.net/__cb20100323195905/avp/images/b/b1/Facehugger_Diagram.jpg[/img]

DeaconMember10120 XPNov-26-2013 5:47 PMI think its a tough one.... The Hamerpedes seem sleek and faster, and yes the way it attacked Milburn was not pleasant..... But then we dont know what happens next as Milburn appeared to be dead. The Face Hugger is a more frightening prospect as to the way it face hugs its prey and implants its embryo and while like above it states removal is difficult without harming the victim/host, i would say removing a Hamerpede is just as fatal. I guess its a case of what do you fear the most a Snake, or giant fast spiders.. lol... As Hamerpede has a Snake/Eal look to it while the Face Huger a Spiderlike Snake cross well its hard to describe when comparing to other known lifeforms as its truly Alien and for that reason i have to go with the Face Huger.

OvomorphMember1 XPNov-26-2013 6:36 PMI agree with you Big Dave and to me they are both terrifying but the facehugger is quicker and more agile. The Hammerpede is like a snake with teeth and abiliy to break human arm bones is also freaky as hell too.

OvomorphMember0 XPNov-26-2013 9:37 PMThe Facehugger is a truly horrific thing. But the Hammerpede is, too, and has the advantage of being new. I think its a great addition to the family, much more violent and every bit as mysterious and otherworldly. A classic space monster. I wonder if we'll see it again.

OvomorphMember0 XPNov-26-2013 10:50 PMThe hammerpede is terrifying, and it reminds me of the creatures in the water in the garbage disposal in Star Wars. However, the face-hugger is much more terrifying. It comes right at you, first of all, whereas the hammerpede sort of swims around ignoring you until you get close. Then there is the fact that the facehugger brings on the xenomorph, one of the most scary monsters ever created. Without foreknowledge of that, it's nowhere near as frightening, but it's still more than the hammerpede.

OvomorphMember1 XPNov-27-2013 1:31 AMFacehuggers got that jumping and aiming for the face with a phallic tube kind of thing that rapes you and thats really scary-horrible.

FacehuggerMember159 XPNov-27-2013 9:35 AMOkay, so we know what the Facehugger does from beginning to end as we've seen dozens attack over the course of all the films, but we don't know the extent of the Hammerpede's "attack". We have only seen the Hammerpede attack once, and we don't know why Milburn's body looked so decayed in such a short period of time. Let's say the Hammerpede's method are to enter your body through any orifice (we only saw the mouth, imagine the others we have, from a male and female perspective) and once inside, it eats your internal organs or uses its acid to dissolve them. The mouth might be the best way to get it then as you might suffocate before you feel the gut-wrenching, tortuous pain of being eaten/dissolved from the inside out. If that is how the Hammerpede attacks and kills, that may be more terrifying than getting facehugged, instantly going into a coma where you can't remember anything, and waking up for a few hours to being chestbursted and dying somewhat quickly. I don't know, just a thought.

PraetorianMember2674 XPNov-27-2013 12:36 PMIn terms of how they look, I feel the Facehugger has the edge, it's those spindly fingers and the fact that it bonds so tightly and perfectly to your face! We don't really know the exact cycle of the Hammerpede, so can't tell if the outcome is as horrific as the huggers. They both have that whiplash tail, and jack-in-the-box springing effect though. The Hammerpede is more like a larger version of the proboscis that the Facehugger extends down your windpipe. @**AI** Cool diagram! :-)