How does Shaw fly the ship?

FacehuggerMember118 XPOct-15-2012 8:59 PMIts going to be interesting to see how Shaw is piloting the juggernaut. David probably knows (they took off after all). That means Shaw would have to get a bio suit then get into the steroid jockey chair, problem is that she is tiny. I dont think she fixed David so that possibility is basically out. Another thing, what do you guys think thatcannon looking thing is used for?

11 Responses to How does Shaw fly the ship? 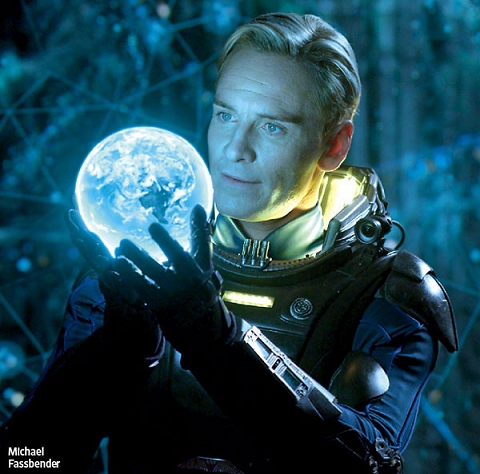 OvomorphMember0 XPOct-16-2012 4:08 AMIn the deleted scenes there's a bit where Shaw opens the wrong pouch by mistake to get her crucifix back. David then says "No, you dozy *****! That's a USB cable. The other pouch! The other pouch!"
The most terrifying fact about the universe is not that it is hostile but that it is indifferent

OvomorphMember0 XPOct-16-2012 4:41 AMMaybe there's some sort of homing device on the ship, that when activated, steers the juggernaut to paradise? Probably somehow connected to the orrery.

DeaconMember10358 XPOct-16-2012 8:39 AMWell the explanation is within the alternative ending and why it was cut. You see David knows how to fly the ship and no doubt he would know how to get Shaw into cryo-sleep but first he would need to persuade Shaw to put his head back on. Ridley said that Shaw needs David and David needs Shaw, but once she puts his head back on the she better watch her back. He also hinted that Paradise may not be anything of such but a place of true horror, so i dont know what his plans are with that. So the alternative scene shows Shaw has a lot less trust for David and even a dislike to him, where as the one they kept shows more of a truce as such and would tie better to them having to get on to both get off that rock! OvomorphMember0 XPOct-16-2012 8:45 AMDavid is flying it. "there is other ships, i know how to fly them" he says or something like that. And she brings he´s body down the juggernaut. Actually that could be the sequel, or part of it. ridley scott said the following in an interwiev about prometheus 2 "You’ve got a person with a head in a bag that functions and has an IQ of 350. It can explain to her how to put the head back on the body and she’s gonna think about that long and hard because, once the head is back on his body, he’s dangerous" we dont know how much time passes between when shaw is leaving the crashed juggernaut and takes the rover to the other pyramid and flyes away with a new ship. Part of the sequel could actually take place on LV233. A bit of intese thriller drama, should she put the head back on davids body? And theres also a new kind of alien walking around on the planet. A creature i belive is very dangerous. we could also have a classic alien feature on our hands, you know "alien sneaks in tho the ship unseen and starts terrorizing the crew "of two?". There could also be more engineers alive on the other ships. there is endless possibileties. sorry, drifted away from the subject a bit.

OvomorphMember0 XPOct-16-2012 9:15 AMYes David is operating the ship. Also David can almost repair his self...probably needs Shaw at a minimum.

OvomorphMember0 XPOct-16-2012 9:47 AMIf,If, Paradise is a place of horror, is it only because the current Engineers had made it become so and was not originally? There was a time in our planet's beginning when it could truly be said that it was paradise, minus the human species, meaning, the world had life forms on it. Nothing but biological life forms not harming the planet, violent, though it may be, all that went into preserving and continuing LIFE.. With the accidental and gradual development of the human species and their penchant for creating tools, and such, which absolutely affects the environment and the life forms therein, our 'possession and claim' of planet earth has since been and continues to be polluted and horrifically 'sickly' beyond imagination.

OvomorphMember0 XPOct-28-2012 2:18 AMDavid is also too small to fit in the big seat with "the gun" and the suit the ship gives to the pilot. I think the only way they'll be able to pilot the ship is if neither has to be in that seat.

OvomorphMember0 XPOct-28-2012 7:50 AM As far as the 'Big Gun Seat" I think ther way it is positioned in the ship..it is at least a planet destroyer,,,if not a solar system destruction weapon.. Also can we assume that the Juggernaut is duplicate of the crashed ship? In any fleet different ships have different functions..and not equuiped the same way..some may have different equipment..even layout... THat could mean duo controls,,not needing to use an oversized chair to guide the Juggernaut to the next destination..next chapter..
Be choicelessly aware as you move through life
Add A Reply
Log in to Post
Alien & Predator Alien & Predator Fandom
Post A New Topic
Hot Forum Topics
More Hot Topics
New Forum Topics
More New Topics
Highest Forum Ranks Unlocked