A minor epic a major mistake?

OvomorphMember0 XPJun-03-2012 2:05 PMOn another point the promise of an epic was exaggerated beyond belief, if they had included some kind of Archaeological dig, and discovery of alien skeletal remains, and a young peter weylands obsession with an alien find that propels him to fund the prometheus project, that would of given some credence to the massive expenditure of the expedition to search for these alien life forms. They could of included the seminal moments of the first successful artificial android life breakthrough, funded and implemented by weyland,... the very first david model off the assembly line for instance, and the motives for sending him on the mission etc, although that parts obvious to monitor crew and minor ship maintenance i guess, but also any underlying agendas he may have been programmed with etc. And of course the motivation for creating life on earth by the engineers in the first place, and some kind of reasoning of just why they want to destroy us thousands of years later would of helped the movie big time. The pacing of the film and execution of character plot is daft in parts it beggers belief just how these things got filmed and what on earth were they thinking to allow these frankly silly plot holes to escape notice is beyond me. The sequence with the cobra alien stands out i mean why on earth would you try to coax an alien life form to try to pet it like its a ****ing kitten when logic would tell you that not only is it potentially dangerous from a physical point of view, but that it could lead to contamination, and all kinds of unforeseen consequences. Why wasn't it just a case of the biologist stepping into the vicinity of the cobra alien creature that triggered an attack much the same way as humans sometimes do when rattlesnakes feel threatened on their turf , to me its a far more simple and plausible plot device. Again theres a scene with holloway who gets burnt to death while still alive, when a more humane thing would be to just put a bullet through his head and burn the body later. There was so many bad character choices in the film i cant help think why wasn't it picked up in daily's or the edit ?. Its one thing to have ambiguity in a film and not spoon feed an audience motives, and then theres just plain stupid, prometheus suffers from the latter on several occasions and if they had given us the epic we were originally promised these gaping holes could have been filled very easily and instead of an ok / good movie - we could of had a masterpiece /instant classic, acclaimed by the majority instantly. What we needed was the 3 hour epic film to give depth, credence, detail, and plausibility, and subtlety, needed to satisfy a scfi hungry world sick to death of popcorn, half assed summer blockbuster fodder. If fifield never made it back to the ship when he had all of his faculties how on earth did he manage it when his dna physical body /brain structure had been radically altered ?. I liked prometheus but i wish so much they had put a slower pacing into the film and included things like a young peter weylands roots, and reasoning beyond a few cave paintings . The enormity of weylands wealth, and power, and the genesis of artificial intelligence, and so much more. The alien visitations to earlier tribes people etc, and a sequence of mans evolution from the primordial sea, and the various stages of mans development would have been truely epic etc. There were so many things they could have done to make it a brilliant lifetime experience. Prometheus does have some terrific moments of course its not all doom and gloom, theres some quite excellent sequences but it wasn't anywhere like the epic i was lead to believe we were going to see.
9 Responses to A minor epic a major mistake?

OvomorphMember1 XPJun-03-2012 3:24 PM@alteredstate i think it's because we back then had respect. knowledge is arrogance.

OvomorphMember0 XPJun-03-2012 3:03 PMThis is a blow the mind movie that had its appeal to the masses part in the middle. Blow the mind in that the 3d visuals are a window into the future of Sci-Fi. I didnt even see it on imax, nothing else out there like this. Clearly the Alien script is limited, in Ai and astronomy terms, so whats been done here is tease it out to parallel life as we can understand it. The race that created us we see in this movie are clearly just the military grunt side of another civilization that will be like us. i.e. We have our meaning seeking culture, but parts of it are fragmented, like the military who just step in and do nasty. All we see here in the aliens films are the machinations of a military civilization at work messing around on planets rather than underground bases as here. Who knows what the rest of this civilization get up to elsewhere. They may have Michael moor**** like colour and Frank Herbert style depth. With space travel and Ai, nanotech, physics breakthroughs etc...the complexity of civilization will be hard for us to comprehend. Hence we need a whole load of alien movies just to get a grip on what a possibly rouge part of an ET military will be up to. We just dont know what aliens is about, and at least this movie opens up the possibility of finding out is the other blow the mind part. Especially as its not like other movies, it parallels our development pretty well. That the mystery has been drawn out so long and resonates with us is somewhat interesting.

OvomorphMember0 XPJun-03-2012 3:12 PMif thats the case then why were the previous visits to our planet as depicted in the cave paintings a peaceful experience they could of wiped out the human race much earlier in our evolution.?

OvomorphMember1 XPJun-03-2012 3:26 PMi havent seen the movie. sorry for all the other lapses this opinion is having.

OvomorphMember0 XPJun-03-2012 4:41 PMIf the space jockey was killed by the alien in the escape ship then who did the crew alongside Ripley find in the chair with his chest blown out and in a ship that already couldn't fly? Was he not the last alien alive? The film felt more revisionist than prequel. There's a running issue with nearly all sci-fi films with prequels in that the technology in the latter seems to outdate the former, even down to David vs Ash or Bishop. It looks like a directors case of 'look what we can do' rather than 'look what we should do'. Based on its own merits, the filmography was excellent but the plot was irrelevant to Alien I - IV as AVP were.

OvomorphMember0 XPJun-03-2012 4:53 PMI'll accept that the planet landed upon was not LV-426 and that the fossilised ship and pilot were thousands of years prior to Prometheus, discovered by Nostromo, but the rest of my comments still stand on production. 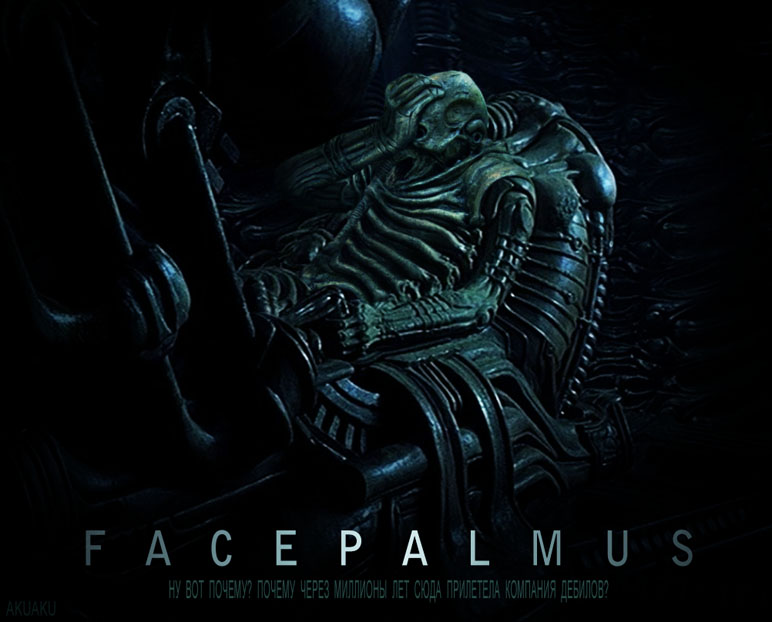 OvomorphMember0 XPJun-03-2012 5:15 PM"I agree,it did seem a bit rushed. Noticed a few editing flaws too,Elbas disappearing cap in the prometheus landing scene. Shame weyland built a trillion dollar ship without one single missile on it,could have saved janek and pals a lot of bother." YEAH! what about a small SWAT team of androids? Drones with lasers and machine guns? And the strange fire from the flowering and silent detonation of Nukes seen from space? This is what I was looking forwards when Prometheus was on Cinema. I mean It would make more sense if the space jockeys went into a interstellar nuclear war and that they won it by a terrible price; lethal biological weapons capable of living anywhere, which would account from Giger's original alien I design of the monster as being a bastard "ready for any weapon" (Giger in a interview for Alien) which would explain why Weyland would like such a weapon... @"Again theres a scene with holloway who gets burnt to death while still alive when a more humane thing would be to just put a bullet through his head and burn the body later." Yeap spot on.