OvomorphMember0 XPMay-08-2012 8:59 AMSo I am streaming Alien as I cruise the internet today and I noticed something I never paid attention to in my many viewings. When Ripley discovers special order 937 and grabs Ash by his shirt the look on his face is one of absolute befuddlement. It seems he had no programming on how to deal with physical confrontations with crew members. Then as Ripley sobs out of shock we see Ash backed up against the wall and slinking backwards with the look of a sex crime victim on his face. Minutes later when Ripley says "let me by Ash" he appears to be sobbing (more emotions he can't handle?) Could these new sensations have been the catalyst to his malfunction and strange behavior toward Ripley's unconscious body? Vengeance or even a desire to explore this new sensation? Maybe David 8 will have similar interior conflicts, after all he is an earlier model than Ash.
12 Responses to Ash's emotions

OvomorphMember0 XPMay-08-2012 9:19 AMthey arent in the terminator universe so they arent hooked up to one mind like being connected to the internet. its like if you were a twin or triplet, so on.. and you got separated and had to go through your own individual lives. just because one of you learned something new doesn't mean your twin or other android sibling learned the same thing 1000 miles away. an once again i need to link a great friend of mines, Svanya's link that needs to be posted to every android themed post. [url=http://avp.wikia.com/wiki/Synthetic]much android info[/url]
[img]http://i1213.photobucket.com/albums/cc465/clockwork_carrion/MM/basket_caseicon.jpg[/img] [url=http://www.youcaring.com/medical-fundraiser/old-lady-barley-needs-your-help/88737]BarleysFund[/url]

OvomorphMember0 XPMay-08-2012 9:23 AMAt one point while going after RIpley (can't remember if Parker was there yet or not) Ash seems to be giggling hysterically. I thought they messed around with the audio quite a bit there. Almost like Lambert's death scene - lots of liberties taken in the sound studio for extra creepiness.

OvomorphMember0 XPMay-08-2012 9:31 AMI know alien universe androids are apparently not networked to anything. But androids are still limited to the humans ability to program them. If David was on the Nostromo instead of Ash for the same reasons and motive he would react similarly yes? Maybe even worse because he is an older model. Certainly we will see him conflicted with whose side to choose but will it be the space jockey's, the exploration crew, or the company? One fanboy suggested to me that the space jockeys biotechnology would be offered to turn David into a organic entity in exchange for his loyalty to them (whatever that might be), this may be false after seeing the screenshot of decapitated David, or maybe the brutal nature of the jockey's simply deceived him into doing their bidding then killing him after he has outlived his usefulness.

OvomorphMember0 XPMay-08-2012 9:40 AMi dont think they are very "limited" i think they have the same, if not better learning ability then we do. like how my sister an i were raised by the same parents the same way, but she is a terrible crazy ***** that should be committed and im just a slightly crazy ***** that still has a positive role in society. we both came from the same "factory" with the same "programing" but are polar opposites. i think each android off the line has its original programing and functions but they do have learning software so each one would learn different environmental things and have different personalities. i will say first: HATE this series... but if you want to see something similar watch all of the seasons of "star trek voyager". like i said i hate this show, but the ONLY character i like is the hologram doctor and it shows the progression of him expanding his software and learning new things, constantly upgrading his personality. that was the only saving grace of this series in my opinion. a basic program starting out a blank slate and becoming more sympathetic then other characters was nice to see.
[img]http://i1213.photobucket.com/albums/cc465/clockwork_carrion/MM/basket_caseicon.jpg[/img] [url=http://www.youcaring.com/medical-fundraiser/old-lady-barley-needs-your-help/88737]BarleysFund[/url]

OvomorphMember0 XPMay-08-2012 10:52 AMi dont see how everyone is convinced that, IF that is a decapitated body by the pilots chair, it is certainly David8. Its very unclear to me, I've yet to see a clear picture that makes certain of any of it. I always liked that reaction from Ash as well, i thought his character was brilliant all the way up to getting his head knocked off. What always had me wondering was where did the original bead of "blood" come from that trickled down his brow when he confronted Ripley? Did it seep out as sweat, or did Ripley damage him that easily and put a crack in his head. As "strong" as he was, he was equally as fragile (like a vampire). I realize that a knock on the head from a fire extinguisher is no small thing, but it wouldnt take a persons head off, not literally, though the end result may be the same.

OvomorphMember0 XPMay-08-2012 11:07 AM@belladonna...when Ash locks the doors on Ripley, theres a shot of just his eyes and forehead, and the bead of white fluid trickling down. i never understood why. is it persperation? and if so, i couldnt have been the first time he had perspired during the journey. Or was it coming from a wound? suggesting that Ripley damaged him just by a frustrated push up against a padded wall.

OvomorphMember0 XPMay-08-2012 11:08 AM@gameover man Ash's systems were still mostly intact after his head was cut off though, just needed to reconnect the power supply and of course disconnect the body so it doesnt attack again, robots are composed of parts that can be replaced, not so simple with humans

OvomorphMember0 XPMay-08-2012 11:20 AMwell i had seen on this forum before tht the excuse for many of his actions was from a spray/mist of the facehugger acid blood contaminating him during the time that they were trying to get the facehugger off kane and made him malfunction later. personally if you watch the entire scene... ash sneaks up on ripley when she talks the "mother" and finds out that the crew is expendable. she pushes him up against the wall and after that part he traps her by closing the doors before he assaults her. my 2 choices are 1. she pushed him against the wall like many people do in arguments with other people.. but she just hit the wrong part on this android n he went nuts from internal damage. 2. he obviously had orders to bring the alien back and he witnessed ripley finding out about it and wanted to silence her before she told anyone else about it. [url=http://www.youtube.com/watch?v=pSh1oYc9Ii4]ash attack[/url]
[img]http://i1213.photobucket.com/albums/cc465/clockwork_carrion/MM/basket_caseicon.jpg[/img] [url=http://www.youcaring.com/medical-fundraiser/old-lady-barley-needs-your-help/88737]BarleysFund[/url] 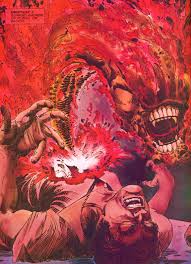