OvomorphMember0 XPApr-17-2012 9:52 PMwas a bit curious... is David 8 anatomically correct / functional in comparison to that of a human male of his era?
51 Responses to DAVID 8's PHYSIOLOGY?

OvomorphMember0 XPApr-17-2012 10:00 PMI've only seen the one trailer. I assume David 8 is an earlier version of the androids the WY likes to send out along with human crews. Where are you seeing this image and I'll give you my opinion.

OvomorphMember0 XPApr-17-2012 10:15 PM@abordodi: i am referring to the latest viral "David 8" video that was released today. in theory, the viral campaign is painting itself with truly broad strokes i only wish Scott would tie in the Tyrell Corporation to this film, it would help me to better understand what Weyland Industries is capable of in regards to them being competing corporate entities, and just how complex their androids are this entire concept of truly lifelike androids is really ahead of it's time wow...

PraetorianAdmin4298 XPApr-17-2012 10:35 PM@shardy; I am not joking, nor am I confusing it with Blade Runner. There is a sex model. :P Check this link out, the Xenopedia Wikki has a ton of info. *(Me and Belladonna were going over it and she found the "Love Slave" model, trust her to find that! XD ) Click here--->[url=http://avp.wikia.com/wiki/Synthetic]Android Physiology and types. From the Alien Universe.[/url]

OvomorphMember0 XPApr-17-2012 10:38 PMDang, I dont have my copy of Alien playing in the background... In that movie, one of the ladies asked another if they had ever slept with Ash. This implies that androids (Ash at least) are endowed with functioning... bits. 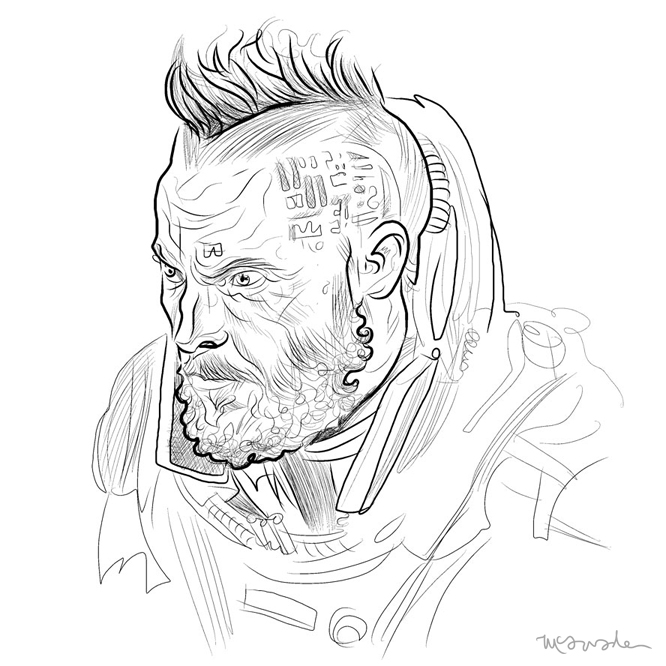 OvomorphMember0 XPApr-17-2012 10:44 PM@boinkerX, that was before that they knew Ash was a synthetic. Good observation though

OvomorphMember0 XPApr-17-2012 10:58 PMOK. Found it and saw the longer 2:37 version. Pretty cool viral gimic on Fox's part. He reminds me a bit of the Jude Law android in AI. I'd say that if he can shed a tear like that, he can probably produce other fluids vital for a realistic "experience" while the old man is at work. ;)

OvomorphMember0 XPApr-17-2012 11:02 PMClick here--->[url=http://youtu.be/hDu78p3h6JE]Deleted Scene; Ripley asks Lambert if she and Ash had sex[/url] Without subtitles, I can't make out a word of what is being said.

PraetorianAdmin4298 XPApr-17-2012 11:07 PM@Abordoli; I just posted that same link 3 posts up. LOL! *Edit: @Abordoli, ah OK, I misunderstood, you need a link that has subtitles?? I can try and find one for you. Ok, got it! And a link to all the deleted scenes! -Here is the Ripley, Lambert deleted scene: "After Dallas disappears and Ripley decides to blow up the ship, she tries to reassure Lambert. "I think it's only way," Ripley tells her. "I'm sorry, you know, it just seems like you're asking us to kill each other one by one," answers Lambert. "I promise you. If it doesn't look like it's going to work, I'll get us out of here." Ripley tells Lambert to hang in there, asking, "Have you ever slept with Ash?" Lambert replies, "No, I never got the idea he was particularly interested. Why?" Ripley ignores the question, telling her to figure out where they are now and to plot their course." Here is the link to the deleted scene site so you can read them for yourself. :D Click-->[url=http://www.alienlegend.com/Alien/DeletedScenes/index.htm]Alien Deleted Scenes transcripts[/url]

OvomorphMember0 XPApr-17-2012 11:27 PMWeyland and Tyrell are not in the same Universe though Shardy.....and the only reference to anything close to that was a suggestion by Lindelof that the aesthetics of 'Bladerunner' played a part in the approach to 'Prometheus'..... Besides, 'Bladerunner' takes place in 2019 in a distopia that's much further along in the colonization of other worlds than in the alien/prometheus universe.....fully human replicants in 'Bladerunner' predate Weyland's statement in 2023 that artificial people indistinguishable from the real thing are not yet a fact of existence...... maybe I'm missing your point...elaborate?

OvomorphMember0 XPApr-17-2012 11:44 PM@craigamore: i understand that Weyland and Tyrell connection i hope for really can't really work due to the 2 different timelines. the point of my post is to try and determine just how much of a man* David was designed to be, in other words, could David and his model type be a romantic / sexual lover in much the was Pris was in Blade Runner with that said, i stated in an earlier post, that the concept that is presented here in the latest "David 8" viral video is profound to say the least. and if you add a sexual / "love" component into the mix - - then it takes to a far deeper level than basic android servitude if that makes any sense... OvomorphMember0 XPApr-18-2012 3:12 AMI think it's far more interesting to speculate how anatomically correct he is on the inside rather than in regards to his possible naughty bits. After all, synthetics in the ALIEN universe have something analogous to veins/arteries, blood and a heart to pump it with... and they certainly have some sort of musculoskeletal system. I'm curious what other human-like internal organs might they have?

OvomorphMember0 XPApr-18-2012 5:13 AMRipley ask Lambert if she did sex with ash to know if hes an android ,,,, because android dont make sex . Otherwise there is no sense asking that .

OvomorphMember0 XPApr-18-2012 4:46 PMi have only heard two commentaries the original alien one ridley alone and the directors cut 2003 cast and crew

OvomorphMember0 XPApr-18-2012 5:10 PM[img]http://img.photobucket.com/albums/v234/LT.HIGHTIMES/1A1WARLORDS.gif[/img] WOW CANADA PHIL WARLORDS...THATS IT MAN...DAMN I LOVED THAT FRIKKING GAME AND HAVE SO MANY AMAZING MEMORIES OF PLAYING IT WITH FRIENDS WELL INTO THE EARLY MORNING HOURS SOME NIGHTS....

OvomorphMember0 XPApr-18-2012 4:14 PMLooking back now, the ****o magazine is a bit of a funny touch. In 1979, who would have though that we would be where we are now. Ridley tried to make it as futuristic as he could, but even then they thought that people would still be reading paper magazines 130 years into the future! Think about it back then... The original Atari video game console was just hitting the market... There was NO such thing as a PERSONAL COMPUTER and the "Internet" was still fantasy to most. Imagine that today... Ash might be trying to stuff an iPad or Android Tablet down Ripley's throat. Hahaha!

OvomorphMember0 XPApr-18-2012 3:46 PMyes I have seen them and that could be true but I was under the impression it was just an urban legend, and are you sure they aren't just laughing while they say that?... Like maybe..."there was a rumour it was a **** mag on the set" but YES I have seen the pics on the walls in the seen you can't miss em. Either way it;s an interesting piece of trivia.

OvomorphMember0 XPApr-18-2012 3:42 PMWell on the anthology 2003 cast and crew commentary they do say its a ****o mag because above on the wall if you look there are pictures of naked girls pinned to the wall when he is shoving the mag into her mouth.

OvomorphMember0 XPApr-18-2012 3:35 PMNO, but in the commentary on the Quadrilogy DVD's they discuss, all of the actors in that scene that is, plus Ridley, it's >>>IMPLICATIONS<<< and the Implications were derived from a Joke either Skerrit or Scott made that the whole thing was in fact ANDROID RAPE and the Magazine was a Metaphor for ASH's Penis.

OvomorphMember0 XPApr-18-2012 5:14 PMIts apparent to me that a lot of you or some of you have not heard this commentary and i would like to say buy this version because its the most fascinating commentary in the entire quadrilogy/anthology with facts, and insight, of the cast , crew, writers, editor terry rawlings, the views about the score the humour the agony, the ecstasy, of the making of this legendary film i can not recommend this highly enough to hear dan o bannons views on giler and hill ridleys psychology of the crew etc its amazing and the highlight of the entire set for me. john hurts views, tom skerrit with veronica cartwright and Harry dean stanton, ....sigourney and ridley, together. ron shusset etc.. the whole thing is as interesting as the film itself .