In the lead up to the release of 2012's Prometheus information on the movies over-ambitious script and its ambiguous narrative were unknown to fans eager to learn of director Ridley Scotts plans for his much-publicised prequel to his 1979 classic science fiction horror movie Alien. A movie the British director had promised ever since recording the commentary for the DVD and Blu-Ray re-releases of Alien.

In the many months preceding the movie's June 2012 release various movie stills, clips and trailers were released feeding wild speculation among the franchise's many fans. Here is a small collection of some of the crazy ideas fans thought would appear in the long-awaited semi-prequel. Probably inspired by some of he concept art from the 1979 original, this theory suggested that the leaking urn's seen in the first trailer were actually metamorphosizing into the familiar eggs from later installments. Fans of this theory proposed that apparatus that David removed from one of the urns (which was doctored to appear darker in later trailers and the theatrical release), would metamorphose into a Facehugger. Throughout the release of the trailers the creature that Fifield (Sean Harris) becomes after his exposure the movies deadly black goo changed in appearance multiple times from a tall, gangly, disproportionate creature to the burnt and deformed zombie Fifield seen in the theatrical release. The characters original mutated appearance led to the speculation that he was becoming a Xenomorph. In the first trailer for Prometheus, we briefly see Holloway (Logan Marshall-Green) screaming in pain with whitened skin and black tendrilled veins. The characters appearance in this brief scene fired the flames of speculation that in that scene Holloway was metamorphosizing into the tall, pale-skinned Engineer seen later in the same trailer.

There was no evidence for this theory in the trailers, but fans believed that the synthetic nature of Davids character when combined with the movies mysterious black goo, would result in the birth of the bio-mechanical Xenomorph as we saw it in Alien. So prevalent is this theory that fans believe it may still be a possibility for the forthcoming sequel Alien: Covenant.

#5 Prometheus was a direct prequel to Alien

Partly caused by mismarketing and partly caused by not emitting enough of Jon Spaihts original script, many fans believed that Prometheus was a direct prequel to Alien, believing the crashed Juggernaut spacecraft to be the same one seen in the 1979 original. In Jon Spaihts script this was the case, but the crashing of the Juggernaut was not amended enough to show that this was no longer the case, causing the confusion in average movie audiences.

Upon release Prometheus polarized audiences equally, with fans of the movie praising the visual magnificence of director Ridley Scotts vision, and critics criticizing the rushed, predictable narrative and one-dimensional characters. Love it or loathe it there is no denying that Prometheus opened up the possibility for the Alien franchise to take a new, fresh direction parallel to that seen in the Alien franchise. Unfortunately, it seems with Alien: Covenant that director Ridley Scott has been pressured into producing a more traditional "Alien Movie" rather than the dark epic tale of gods, demons, and mankind's origins as was promised. Will Paradise ever see the light of day? Will we ever see the Xenomorph and Engineer homeworlds? Will fans ever learn of the outcome of Shaw's (Noomi Rapace) quest for answers?

I never heard about this. But I heard about: "David becomes a human" and maybe this will be in Alien: Covenant.

I really like Prometheus as a stand alone movie. Separate from the Alien series. Not sure the reaction to that would have been? No xeno's, no Ripley....change the the company name.

Just a movie where they find a cave painting and go exploring. (Almost like a episode of Star Trek...except everyone's a 'red shirt' and only Picard and Data survive.)

I like the connections to Alien, myself. Though, I'm one of those fans who enjoyed Prometheus for the concepts in invoked, not necessarily how well put-together the dialogue or secen-by-scenes were.

This article alone shows how thought-provoking Prometheus was and how even to this day, fans speculate and debate its many mysteries.

There's too many theories to list for one article, but I did enjoy these 5 you chose Gavin. The Urn to Egg morphing was one of my favorites to discuss. Alien fan imaginations have no bounds, haha.

And to add, I think had they stuck to the original Fifield concept and had he not been killed, he would've very well mutated into somewhat of a Xenomorph, without a doubt. That's one thing I did not enjoy - zombiefield.

Yes the trailer left many of us wondering.....

There was one point when i thought Holloway could be changing into the Engineer from the start of the movie.... as we only saw him from behind with the "king has his reign" quote...

Then seeing Fifield, made me think something similar happened to Fifield and Holloway...

Looking at David, and the Viral Sites... led to me to maybe David being a bit of a Pinocchio, then i thought about the Engineer Scene where he was standing over Shaw and thought "this guy does not look 15ft tall, dont even look much more than 6ft" so i did some measurements and estimated the size to be about 6.5ft tall lol

Ok this is a prequel.... we see some Xeno Related DNA, if it is to link to Alien, well the Fifield looked none Mechanical where as the Xeno was Bio-Mechanical.

We was given clues maybe David would have a God Complex and want to be Human.. like Pinocchio and maybe he has something to do with Shaws C-Section...

This led me to think that they find the World of the Space Jockey Race, and they are Advanced Genetic Engineers and somehow David uses something they have to infect the crew... something from that Urn... that leads to Holloway and Fifeld mutations... and also some how... or something else lead to Shaw and the Baby Trilbite/Face Huger C-Section.

Then looking back how small the Engineer standing over Shaw looked... and the scene at the start of the movie... that in trailers we was never sure about where this was..

I feel David had attempted to Evolve himself....  and in doing so, something changed his synthetic white blood to black blood and he became Part Flesh, Part Android...

Ultimately he was trying to play God, using the Technology found and unleash it on some of the Crew, and Causing Shaw to have the Baby Squid..... but ultimately doing these things and making himself more Mortal.... led to his down fall.

And that he got into the Space Jockey Chair as the process of his change was  making him taller, but he got Face Hugged by Shaws Baby Squid and this lead to the First Xenomorph...

And this is how the Xeno was Bio-Mechanical.

Thats what i thought was going to happen... and who knows maybe they are hinting at this for Alien Covenant?

But my theory was SHOT DEAD.... After a later Trailer that if you looked closer at.... showed Davids Head....  some speculated it could be Fords...  But then when looking at a leaked Shooting Card that described Davids head rolling about on the Juggernaught Floor..

That pretty much confirmed it was Davids head... and so bye bye to my David becomes More Human, gets Face Hugged and leads to Xenomorph and served him right for playing God by using stolen Fire!

This is the idea i liked the best... shame we never saw it.. 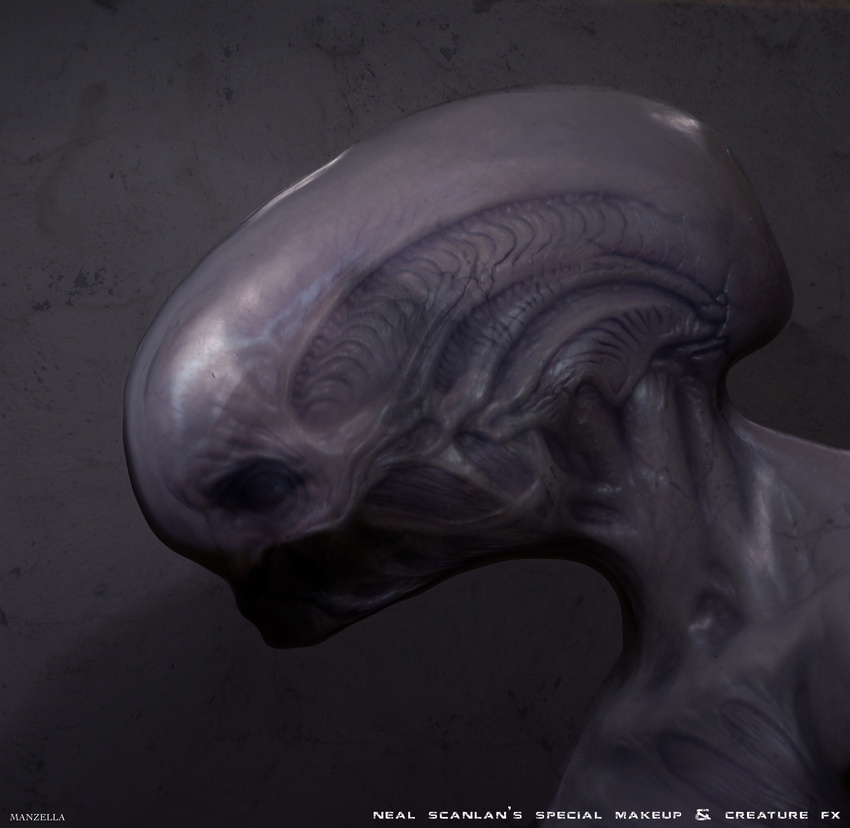 But they had worked on it.. 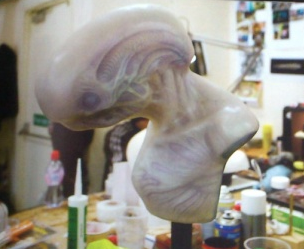 I also liked this unused prop... both would have worked and gave us more of a Xeno Connection. 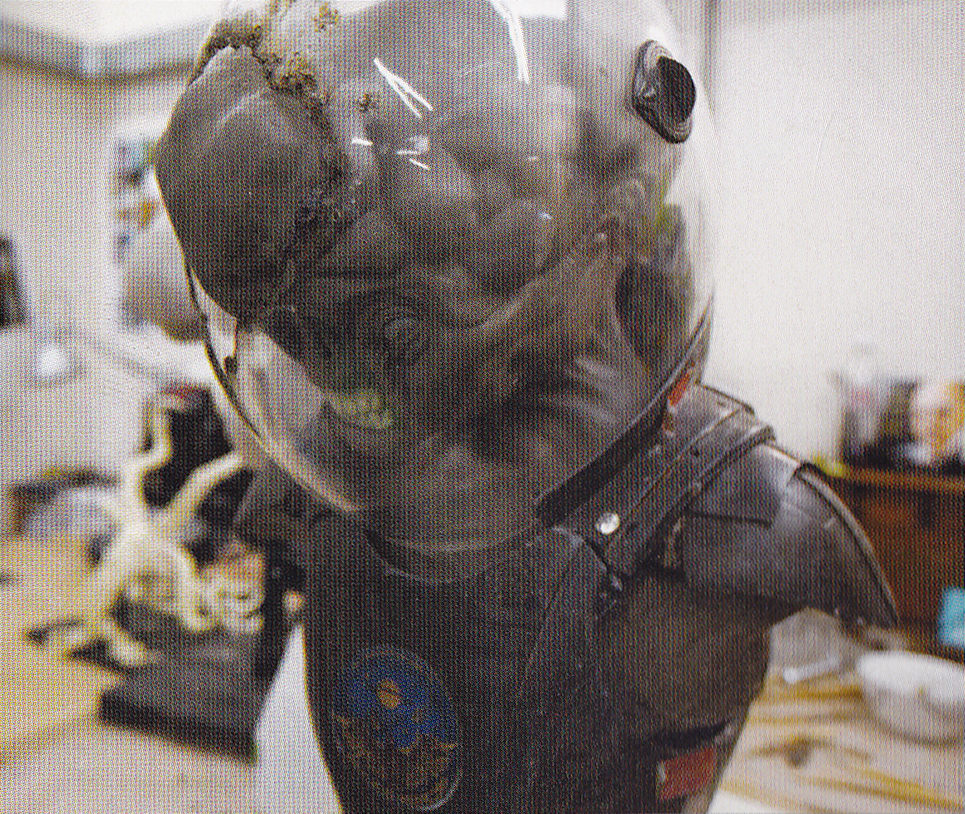 Big Dave: I like that Fifield version too, it would have been a lot better.

Number 2 is my head canon, maybe Zombie Fifield was the early stage leading up to this transitional stage from the deleted scene? Well that's my fan theory.