So far this is what we have for the artwork Blu ray of ALIEN: COVENANT..Doesn't mean it won't change but even Target and Walmart have the same artwork and bonus package editions. So we'll have to wait and see what is final..

I don't even really care. I hated it so much I don't plan to buy it. But I would like one that comes with the digibook Who cares.  Package it with a flute and the Prometheus theme sheet music or go home.

I want that digi book so bad

I agree with Phallic Jaw, no flute is no buy.

An included flute is a brilliant idea, or a facehugger embryo (yeah that one). I'll still buy the limited edition blu-ray.

I'll buy only the ultra-hyper-super version which includes a lifelike David-Walter android combo.

It's your loss, Patient leach. Covenant is brilliant.

Decided to create my own version

Here it is. I juts hope people don't mistake this for the official. 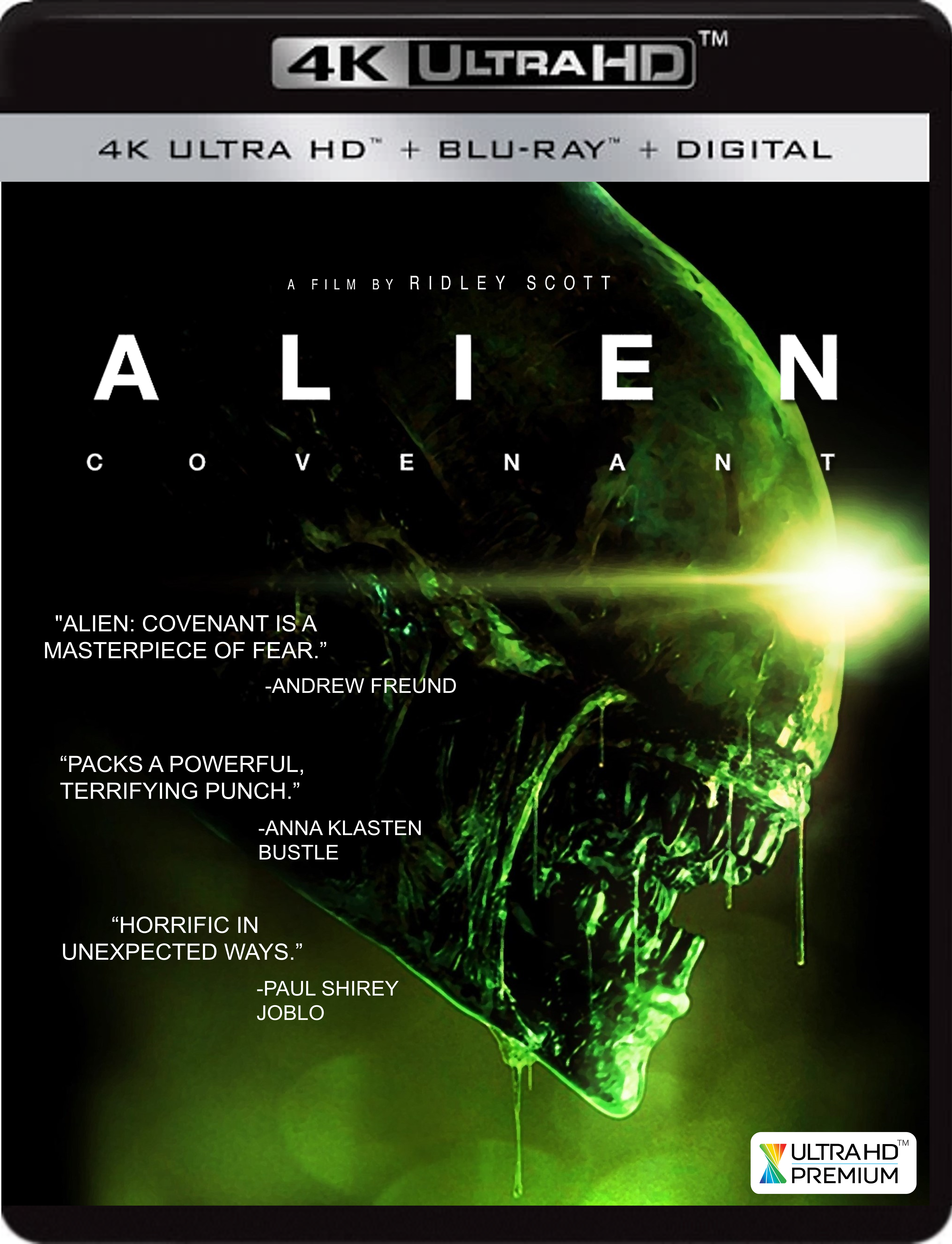 @Neomorph that's actually another brilliant idea.  I went to a market once that had one stall selling all kinds of bugs encased in some kind of transparent resin/plastic, and then a ring through it for your keys (so basically a key chain).  I bought the scorpion one, but they had spiders, etc.    Really neat creation.  They were also about the same size as those babies that Div'Ed coughs up.  I would love to have a facehugger one and as a keychain too.  It would make a great conversation starter if it was sat on the bar at your local "drinkery".

I hope you are reading this, Fox BD people.  We want a collector's edition with flute and facehugger embryo keychain, not some crappy t shirt.  Thanks.

Honestly, I am holding out hope that there is a good bit of extra scenes.  As a fan of Prometheus (despite the idiot plot) I think the extra scenes added a ton to the movie.  Here's hoping more is there.  They can't undo any of the damage from the full Xeno instead of the chestburster etc, but one can hope they'll deliver more..

"It's your loss, Patient [Leech]. Covenant is brilliant."

Brilliant? That is insane. The first 30 minutes, maybe, is a decent sci-fi premise. Then it took a nosedive of stupidity and lack of creativity and completely ruined the Alien universe.

I thought it was brilliant as well. Just not in the direction I hoped it was going.

It was brilliant,  can't wait for the bluray,  and hugger keychain,  they should add a black goo urn while they're at it lol

I absolutely LOVED Covenant. I can't wait to buy the Blu-ray. Maybe I'll even invest into 4K with this one. Dark Nebula that looks great!!

Nah Covenant was a lot better than Prometheus, the best one since Alien 3. They had better characters plus Shaw died (finally!).

Patient L: I think that there was more stupidity in Prometheus. At least we didn’t get a scientist that was trying to pet a space snake or a map guy that gets lost without any explanation what so ever but sure there were things to complain about in Covenant also. OK so Oram looked into the egg but so did Kane in Alien. You mention a lack of creativity but remember that the franchise has been around for a bit more than 30 years and it can be difficult to come up with constantly new things but also new things don’t automatically mean better or good things.

Dark Nebula: I agree, the art work is good