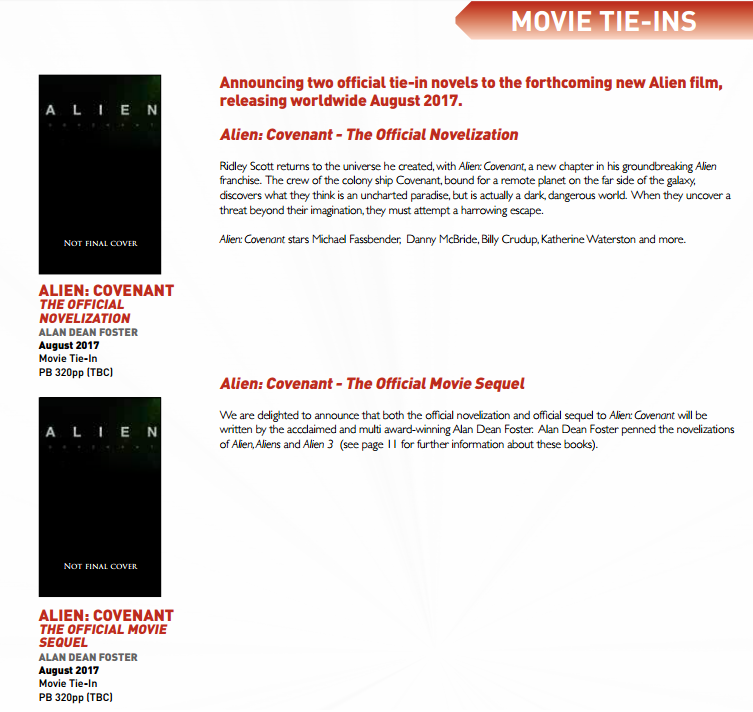 Noticed something over at Titan books about teh Alien Covenant novel that's coming about - am i reading this wrong or does this say official sequel to the main story?

The description also give us a slightly different synopsis I've not read its on the last two lines: it says ''Ridley Scott returns to the universe he created, with Alien: Covenant, a new chapter in his groundbreaking Alien franchise. The crew of the colony ship Covenant, bound for a remote planet on the far side of the galaxy, discovers what they think is an uncharted paradise, but is actually a dark, dangerous world. When they uncover a threat beyond their imagination, they must attempt a harrowing escape.''

Will the book go off to explain more of the story adjacent to the story were gonna  get in the movie..forgive me if ive got this wrong anyway?

I think it could be a clue that the reason AC is released earlier is maybe a sequel is not far behind..

A long time ago when disusing a Prometheus sequel and some fans wandering if we ever will get one... i said Ridley Scott is very very keen on getting the Alien Franchise connections done, because its his Pet Project and he has even prioritized it over Blade Runner.

The fact he is not as much involved in Blade Runner 2 and has placed himself as Producer for Alien 5, shows that he wants to rubber stamp the Alien Franchise with his ideas... he wants sequels in the Franchise to not go against the ideas he has for the Prequels.

Looking at his Age.... and potential Cast Members in particular Fassbender (he is a Robot David and well Robots wont age wont they)...

So i said a while ago that its likely they would want to complete the set of movies that take Prometheus to Alien Sooner rather than latter...

And so i wandered if we would see a closer release date between the Prometheus Sequel and 3rd movie than the typical 5 year wait between other movies in Franchise..

Ridley would want to be hands on the Franchise... and i dont think he wants to wait until the year 2020 before a 3rd movie is underway....

I think there would be nothing worse for Ridley if he got too old or passed on before the dots from Prometheus and Alien was completed and then see things evolve or change in ways that would make him turn in his grave..

So yes i think Ridley would want to get the next 3 Alien movies done as soon as....

The big question is faith from FOX.... have they started work on the next movie?  Do they have a draft... i would think they have the back story and where they want to take us from AC to Alien... already.

I think its a question of will FOX see the reaction to AC to then know if they can then release the movies as Planned... but then also take on board and criticism from AC and adapt what ever plans they had to suit..

As its all about $$$$$ at the end of the Day... and while its nice to explore ideas of Ridleys... if the Fanbase wants way different and Fox feels the fans way will make more $$$$$ this is where they would go..

Which is why i think the delay and some changes to what Alien Covenant has been... a more Alieny movie..

at last someone has looked ta my post lol thanks for the feedback!

so yeah Dave apparently this is all big news now and i posted it ages ago. only me an you saw it! so thanks for being kind enough to actually be arsed and read peoples posts on here. whats the point in actually posting if none of the mods or owners of the site read these posts, as you can see i blew the lid of this ages ago but no one could be bothered to even look at the post. i found the link via a pdf using advance google search and after about ten pdfs i found that... what a surprise no one looks... now avpgalaxy are taking credit for getting the news out. i give up .

That's a little harsh.  I/We do our darnedest to read all the posts, and even have to approve some before letting it hit the forums.  Let me drop a bomb on ya that will brighten your spirits.  Scified has an exclusive interview that no one else has.  I arranged it just yesterday, so don't give up.  We're working on a lot of things behind the scenes.  Chris or I will be posting it up in the news section today.

im raging about it rick - im absolutely weakened i posted about this , none of you read it , then all of a sudden its break news nearly a month later - come on dude - i busted my balls looking for that - this is the reason i dont post on here hardly anymore - none of you read it!

" now avpgalaxy are taking credit for getting the news out."

Apologies Diesektor, This topic totally flew under my nose. To be fair however I was waiting to confirm whether or not it was one novel or in fact 2 that Titan were producing. I will add your credit to my article though to show I didn't ignore you!

Thanks for the post Diesektor, FOX is going big with the Alien merchandising now it seems, VR, books. Hopefully we'll get a new game as well.

oh game sounds goooooood. like anything though has to be done in a way that pays tribute to the movie. my suggestion would be to bring in the makes of the isolation game, they def put the fear factor back into the xeno. fox were always gna milk this cow as theyr not daft, they know how huge the following is for alien

does anyone know if dark horse is gna give us anything?