Following the awesome review breakdown of The Weyland-Yutani Report by our very own member Lone, it got me thinking about Weyland-Yutani's specific classification of our beloved Alien. The classification XENOMORPH XX121 represents the Alien featured in Alien - Alien: Resurrection. This includes it's specific life cycle, design and characteristics.

Why am I bringing this up? Well, this particular classification suggests an index of classifications. An archive of information about other Xenomorph subspecies, not limited to the ones encountered "on film". 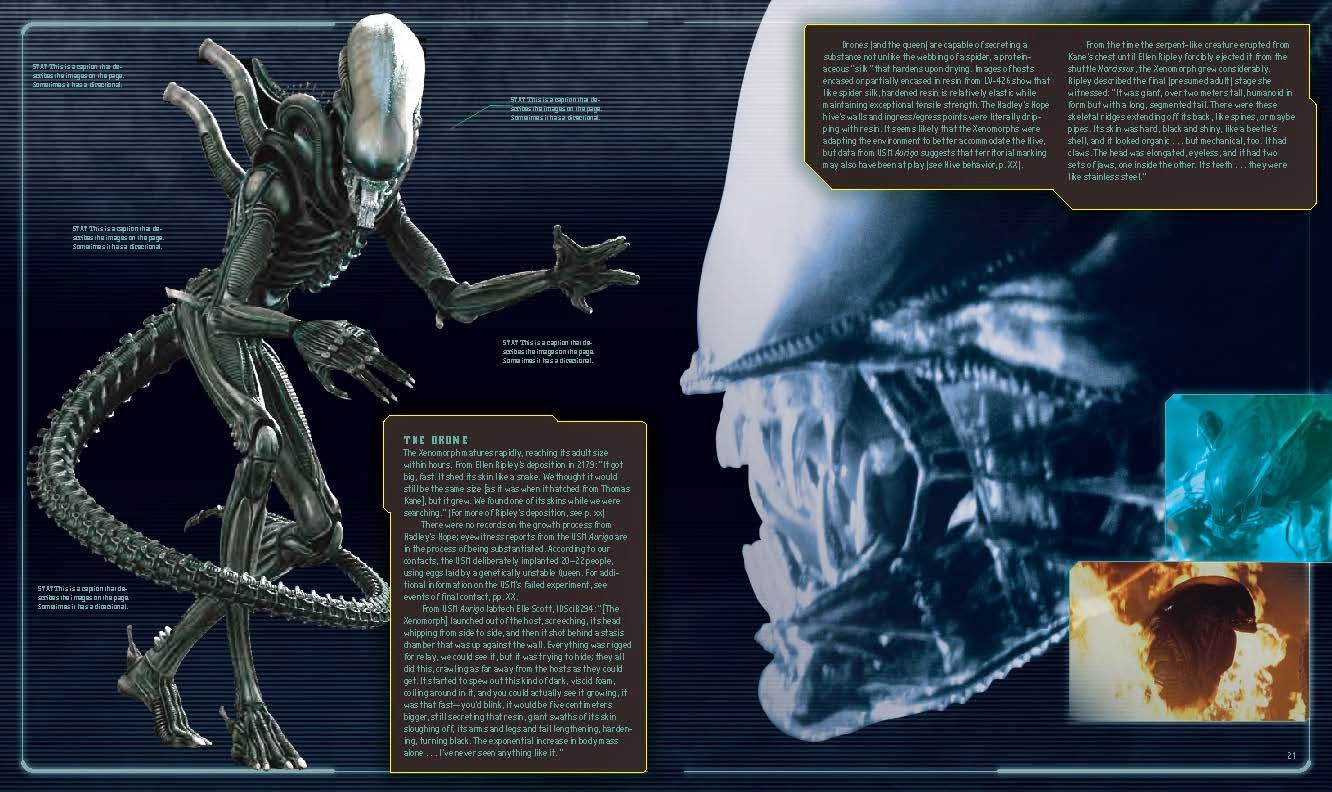 Like the Deacon from Prometheus and it's unique life cycle, perhaps Weyland-Yutani have records spanning multiple encounters by its deep space crews? Surely by expanding their Terraforming venture (which could be a front for Xenomorph exploration anyways) their various crews would have stumbled on other forms of the dreaded space beast. Perhaps even uncovering other Engineer facilities and setting in motion new processes which create new Xenomorph subspecies?

I feel this may be the case and will be evident in Alien: Covenant as well. I feel like given that Weyland and Yutani are merged by the time the Covenant vessel find Paradise, they are aware of the Prometheus' fate and the organisms encountered on its mission. Alien: Covenant are sure to feature familiar Aliens, but perhaps not the exact same "classification" by Weyland-Yutani standards. Slight variations in the biology and life cycle will like be introduced while keeping certain aspects true to XENOMORPH XX121.

Another good book is the "Alien:Vault". Some great info.

@David007; Agreed, Alien Vault is an incredible book, I have a read through my copy regularly.

I wouldn't mind seeing other variations of the Giger Beast/Morb but they'd have to be a lot more bio-mechanical than the deacon and trylobite from Prometheus, which were more organic in appearance.

Guys, no self respecting ALIEN fan would be without Alien Vault! XD

ALIEN: The Archive is damn good too!

Whilst those wonderful books explore the films in the Franchise, the Weyland-Yutani Report is specifically about the Company itself and their goal of obtaining the MORB, its presented as a factual account of everything they have discovered about it so far.

Chris you clever clogs, why didn't I think of that? XD

Here is part of the Companys' Statement of Intent-

The urgency of obtaining a specimen demands the attention of every W-Y employee worthy of clearance. There is new data already being collated regarding the most recent contact, and as prospects arise, the decisions we make regarding these opportunities may well define the course of humanity for centuries to come.

It is time for us to honour the brilliance and ingenuity shown by Sir Peter Weyland over three centuries ago, when he set forth to lead us to new worlds Sir Peter visualised solutions to the impossible by seeing further than any man before him. Now we look to the Xenomorph and can see the future of Weyland-Yutani.

The above would imply that for many years, massive resources have been allocated to finding and exploring the MORB above all else. It's highly likely that W-Y would have encountered forms of the MORB on other planets, or even deliberately infected a planets indigenous species, resulting in MORB variants.  Imagine this, another 120 known variants transforming the species of other planets! If that's the case they are keeping it Top Secret, on a need to know basis.

Who knows, perhaps even the original Space Jockey is the result of a species + MORB merger?

The Xenos are cool but there are other possibilities to get interesting monsters. Since there seem to be different variations of the Xeno in the book and since they were trying new ones in Prometheus they could use some new versions in Alien Covenant.

@Chris; Do you know if the author of this new book received all the details/information by FOX?

I would think the authors of the book had been in contact with at least FOX and members of FOX who know the route they wish to go with the Xenomorph and its DNA.

So maybe while not being 100% The Xeno Bible. it would have had to been rubber stamped and i dont think any information in it would be totally against what we would be shown.... but that does not mean to say that explanations and further Xeno related Material will arrive from the next few movies that are not touched upon and could change or EVOLVE some of the things this book shows us...  Rather than DISCOUNT them.

All the information in the book was extrapolated from the five films, in consultation with Fox, Insight and a number of external consultants.

It was also conceived a long time before Covenant was a thing.

I really wish they'd stop labelling the Giger Alien as a drone. It is clearly completely different from the regular drone that is known from the AVP franchise and resurrection, in fact in the first AVP game it is labelled as a Stalker, which fits its characteristics and abilities, and IMO labelling it as a drone just subtracts the authenticity of the alien. It can even produce its own eggs as was seen in both Alien director's cut & Isolation.

The OG Alien was also pretty slow and stealthy with very short bursts of quickness.

I think we need to remember for that reason.... it was mainly restrictions due to Technology more than how they may have intended to portray the Xenomorph.

Now we can use special effects for some scenes using smaller more Agile Actors in more lighter Monster Suits that allow more agility and speed.

Also as far as the Number System.... we dont know how this works....

Is it 121 kinds? I doubt it but the Black Goo would offer endless possibilities.

The same applies here.... 121 could mean 21 kinds which could include stages so Egg, Face Huger and Chest Buster are 3 more but i doubt this... i think they would all come under XX 121

I am thinking its in regards to being very related to those Eggs on the Derelict and the same kinds of Eggs elsewhere... Thus they are XX 121

Which to me maybe logically means we have 101, and 111 so TWO More related Monsters the company has had information on....

I think the Alien Prequels could introduce us to those TWO other related designs.

I think you may be over thinking it a little. It may be just a random number signature to sound sci-fi-y

I definitely say its not to suggest hundreds of Xenos though..