29 Responses to New pic from set on alien covenant

to me this looks like she may have sabotaged a ship and is now just waiting there for the End... She seems Calm as if in a Trance but also reminds me of her doing something Sacrificial.

Maybe this ties with the Blowing up of the Covenant Ship (or part) on Set.

What if she destroys the Ship to prevent something leaving with what ever Horrors are uncovered?

But again i could be wrong

Or the Ship she is on, has either crashed or is badly damaged and she knows that their is nothing she can do now but wait....

To me,looks like something bad happened(xeno attack?) because we can see her holding a rifle gun.

And by the look at the corridor of the ship and the room across,and by Michael Fassbender's comments the covenant ship has an old school look like nostromo,its not advanced like USCSS Prometheus.

Who is the woman at the right?

Dark Nebula: Thanks, that is was what I would have guessed but I wasn't sure.

The orangeish light (from what looks to be a fire in the background?) and design reminds me of Alien 3 actually haha. But this is extremely exciting! Looks like she is sitting around shortly after or maybe during a big event in the film.

Fire could mean flamethrower which could mean xeno I guess. Or the fire could have been from damage to the ship/an explosion due to any sort of fight or accident.

This is actually great, an image that is provoking some thought while not giving much away!

In the words of Ash: "Groovy Baby!"

She def has the Ripley feel, short hair and no doubt it will be between her and David, also some creature she has fight.

She is resigned eyes closed and we can see a glance of someone sat (at the controls). Caryn I know believes one of the shocks of A C is Daniels does not survive.

I think we are going to see a lot of photos which link the movie to A L I E N and this has the classic iconography. Hanging wires darkness T shirt clad female.

So long as the film looks a lot like A L I E N and is driven by character but remains high minded and thoughtful dealing with the big themes of Prom I am good to go.

What is the time line in accordance with the events of the Nostromo and crew? Where does this story fall in the timeline?

Cuponator3000: Yeah it reminds me about the big fire that they had when they cremated the bodies of some persons in Alien 3. The scene is where Dillon had a speech and a bit later we see the Xeno burst out of a dog or what ever it was.

Michelle: If she is a well developed character (imagine Ripley as far as a well developed character goes) that we can feel sympathy with then I hope that she survives. Well done characters is a must if the movie will be interesting. The themes in Prometheus were not wrong per se but maybe there were too many themes at once? Maybe they could choose one or two themes and focus on them.

I'm still trying  to figure out what's in that common area. Is it a person? An Alien? Am I seeing things? I don't have access  to the most sophisticated image editing software, but I as able to brighten up the still a bit. It didn't reallly help much but did highlight some other details a bit:

Thanks Dark Nebula and Chris!

Looks as if Daniels has tears running down her face?

I'm not sure what is going on here. The part of the ship where Daniels is sitting has a slight Juggernaut vibe, look at the shape of the bulkheads and doorway.

The other hatch, and beyond looks completely different. Could this be a docking gone wrong?

Anyway, as Chris mentioned there could be a figure behind the fire, but I am going to guess that it's a crew members seat with headrest.

I found a bigger version of the picture here:

As far as I can see she is the only person in the picture.

@Thoughts Dreams thank you for the blown up version. You can see her tears and what looked like someone now seems to have become the back of a chair or disconnected piece of equipment. We have sometime to wait but now we are threading into A L I E N with John Logan revising the script I am expecting a character driven film with more focus and some answers. Ridley is 77 he will want to close this out now. I am also impressed how he hesitated until the script was right and his work on the Martian is a return to form.

Thanks or the HD version of the still @Thoughts_Dreams! I've uploaded it to the Alien: Covenant stills gallery here on Scified.

Just so everyone knows as well, if you find any cool new Alien: Covenant images, you too can upload them to the gallery! Currently we only have one for official images but I'll be opening one up for fan art this weekend.

@Lone, you may be right. The shape I'm seeing could just be the back of a chair. But I'm not sure it's a docking gone wrong. I think what's more likely is she just blew up part of the ship to destroy whatever was trapped over there. (Cue New Zealand explosion scene)

@David007  - She really does give off a Ripley vibe.  I'm happy that she appears to be a little more like Ripley than Shaw.  I don't think that Shaw was a bad character... I'm just glad that Daniels is a little closer in spirit to Ripley.  This first look at her has made me much more excited for the film :)  Can't wait to see more.

There is a emotion as far as distress on her face and to me it looks like maybe this scene is a aftermath scene and maybe she has had to Torch Someone on board the ship.

So a guess but i think a similar vibe scene would be what if this is after the aftermath and she gets to the Ship to try and escape but the ship is damaged, and she has had to Torch a Member of the Crew she was fond off..

Looks like maybe she is stranded on a damaged ship, and has maybe had to Torch Something and now she is all alone and can only play the waiting game....

Yes, she must be stranded, otherwise she would get the hell out of there!

@Michelle Totally agree with your comments about Ridley, regarding the script and The Martian.

...and welcome [belatedly] to Scified!

Yes to looks like tears and yes deffo a chair ... great shot (image) that ... powerful ... and the Ripley vibe I think is all part and parcel of how the women will change (over time) til we get to Ripley herself, when we finally get to 'Alien' ... i.e, the old school look and feel is being developed ... I'm loving this ...

I've got the new latest full hi-res version of the crop, so not worth posting that as well ... To me it just looks like shes taking a break between takes and the fire in the BG is a special effect being tested and prepared for another take.

Not sure if it matters at all, but the timer on the monitor reads 19 mins. I assume this simply means the current runtime for that particular camera & monitor. But nonetheless thought I'd bring it up: 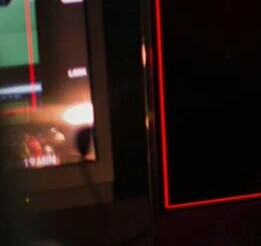 @Chris ... that looks like a possible green screen shot but definitely different to the main monitor ... I know (high end) directors mix GS/VFX shots direct into the scenes real-time previews, hence my reply ... I'm wondering if the corridor is CGI, because the first 2 rectangle lights are a bit too sharp, compared to the structure surrounding them, which is slightly blurry (out of focus) as you would expect ... this is more evident on the HD image ...

Michelle J and Chris P: You're welcome, I am glad that I could contribute to the discussion.

Yes the timer is 19 minutes but it could be shooting timer and so not related to where the scene is in the movie.

who knows, could be a red herring and maybe yes just as you stated and not part of the movie.

Ridley has said the first Act is about the Covenant Ship and Crew, and maybe the ship is sabotaged so that it has to make a landing on Paradise... so maybe their is another Android or some member of the crew who does this and knows a bit about what to expect.

But im not sure... the No where to run tag could mean that either a shot at some point where they are stranded be it on the planet or in space, but its a scene that to me looks like its as if Daniels is maybe all alone or at least on that ship.

Blackwinter-witch replied to Was the planet shielded before David arrived?