At what stage did weyland become weyland/yutani

The only recollection I have of weyland/yutani is from the AVP movies. I know in the extended verison of aliens there is a weyland sign. It looks like there is a Y blended in behind the W. But I'm not totally convinced. Does anyone have any information on this?

"how do you feel?"-" great, next stupid question"
12 Responses to At what stage did weyland become weyland/yutani

Weyland Yutani appears in the movies Alien and Aliens, it's better known as 'The Company'. However it's spelled Weylan Yutani no D, in Alien.

Here are some screenshots of the Logo as it appears in Aliens: 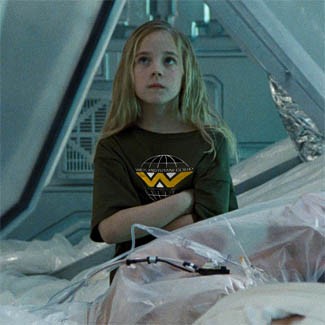 The famous Weyland Yutani Big Wheel (it's 'The shining' in space!) 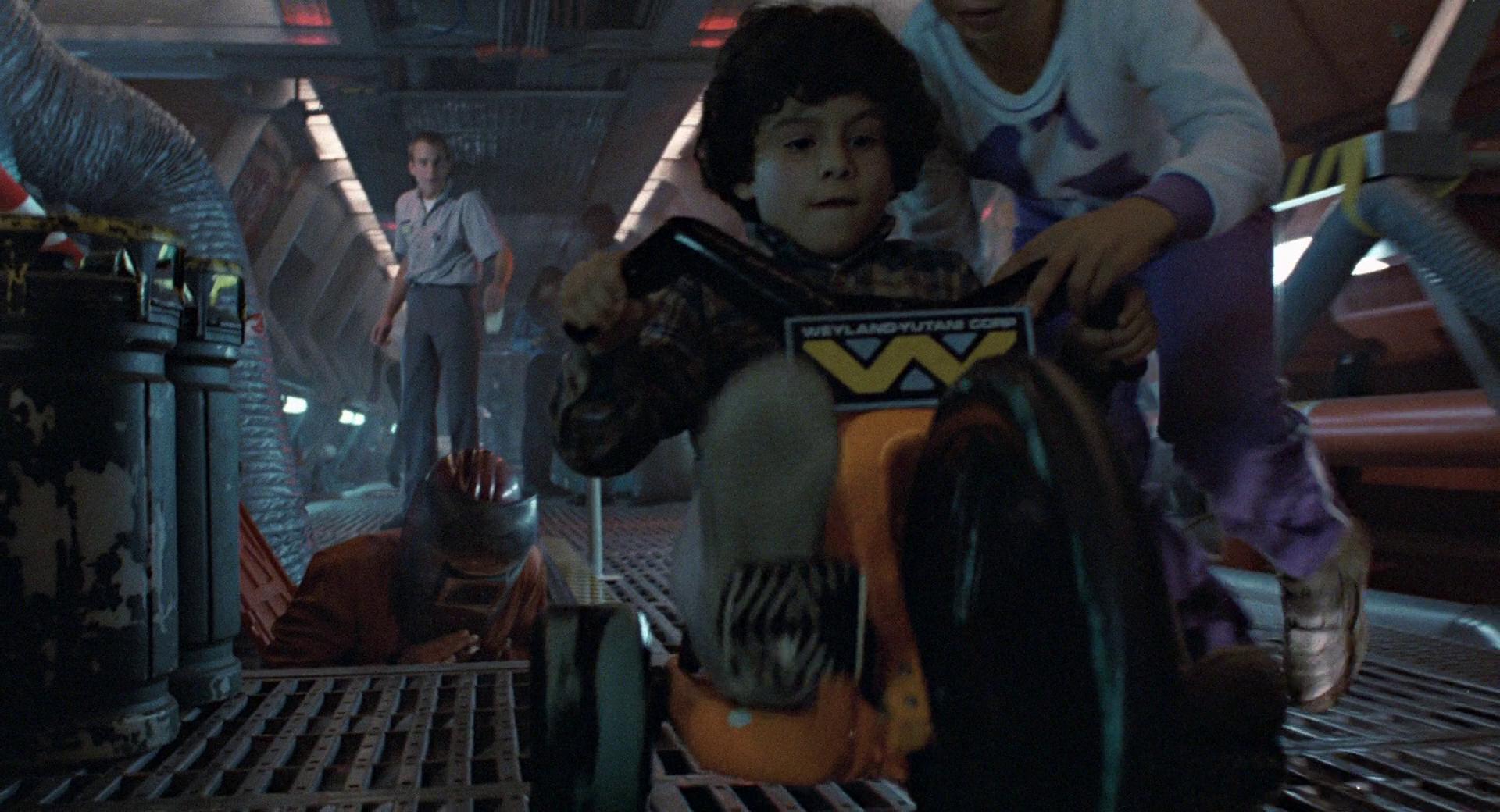 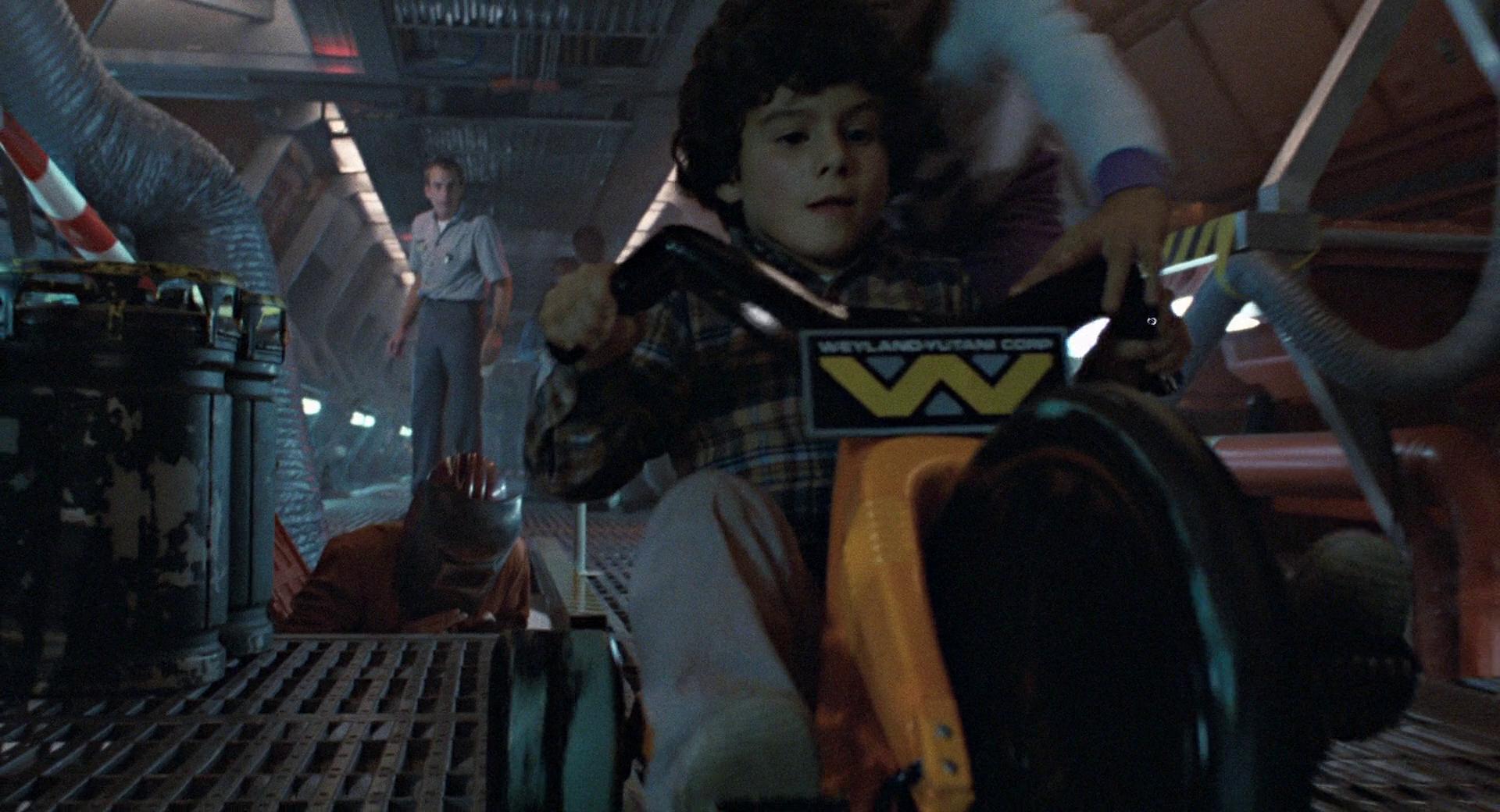 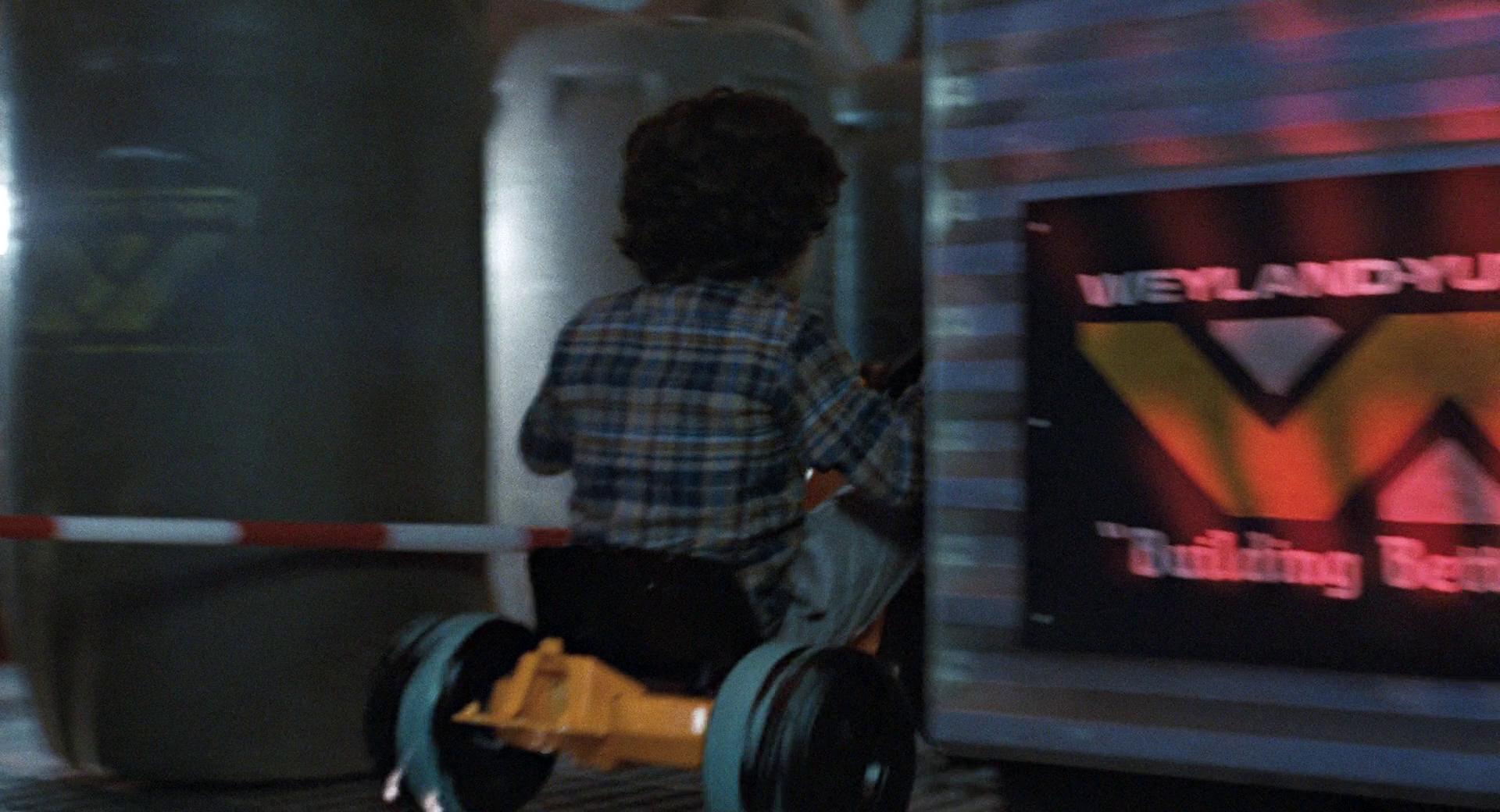 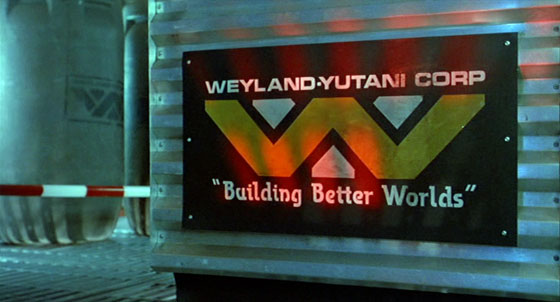 Well the company will have to be merged sometime between 2094 and 2121 in the Alien timeline, we would have to assume that at the time of Prometheus from what we know Weyland Industries no longer has its CEO and Vice CEO that being Peter Weyland and Meredith Vickers.

We see and must assume that as of the time of events leading to Alien that Weyland Industries is no longer its own single company and that it has been merged with Yutani for some time.

Hopefully Prometheus Part 2 or 3 will answer roughly when and how the companies merged, but my money would be a date between 2100 and 2110.

When Walt Disney was put in a Cryo-chamber?

@Svanya
Where did you find that Aliens screen where Newt has the shirt with a logo? I was trying to find that exact shirt in any Alien movie and I didn't find. But I found this page and when I checked that scene in Aliens there was no logo on the shirt. Is that screen fake or are there more versions of the movie with a different shirts?

Screenshot from my version of Aliens: 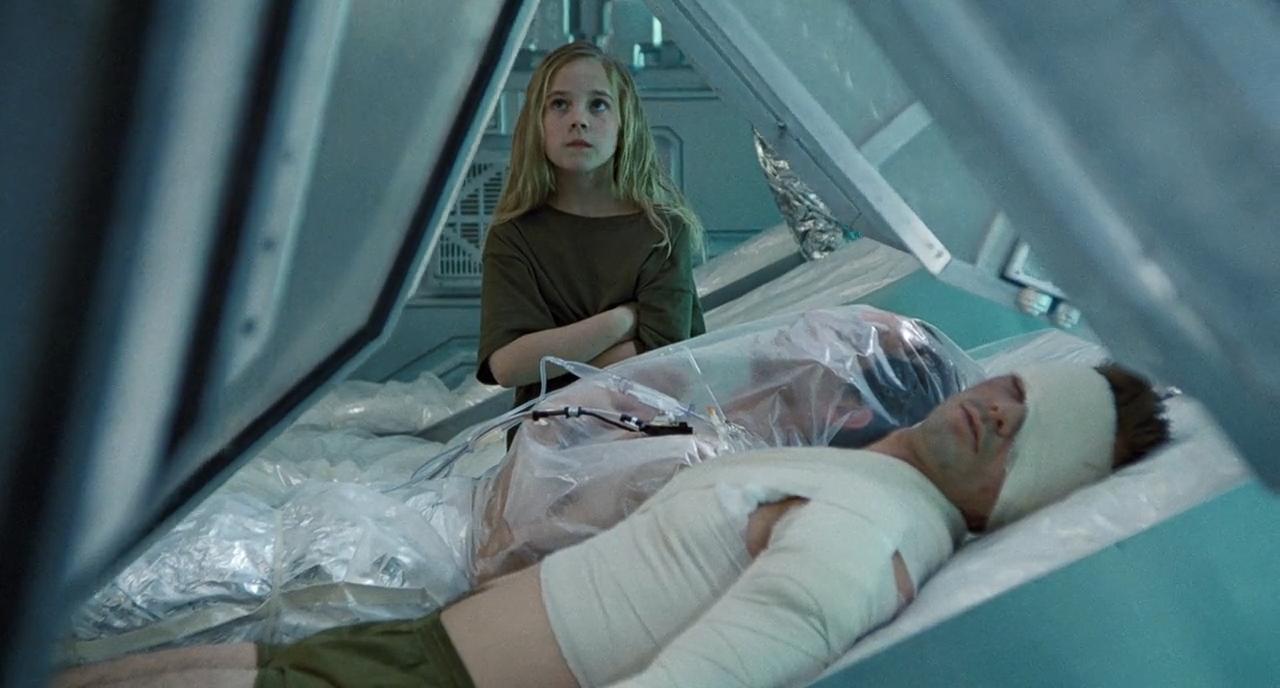 Indeed thats what the source book Weyland-Yutani have put and i cant see them making this up as its not to my knowledge mentioned in the Movies or Comics?

But i am not sure about Novels...

The source i had, with supposed information on Greens Draft of October 2014, which can only be taken with a pinch of salt.. had informed my contact the weekend and my contact passed this onto me today.

That the movie Synopsis seems to have bypassed a Event 7 years prior that held a big part of the Plot, and they also said 25 years prior to Alien was a key part but not we are left with 18 years to cover things. while somethings seem to be omissed...

But again the only way to find out is if Paglen/Green drafts come to light or that if AC and its sequel touch upon such stuff.

Covenant may change that date, or the writers may use the WYR as reference.

I don't imagine corporate mergers are especially important to movies about monsters in space.

Indeed it seems as Michelle suggested that Logan was brought in to maybe remove any unnecessary Plot Elements that are not need to be covered.

As for the date, if its not from the Books... i would assume when working on a book that passes itself off as a official resource book then Fox would sit down with the team and make sure some things are not put in that could contradict what they are trying to cover...

Or what they was trying to cover as off when that book was being worked on... now seems David and Shaw going to meet beings who are not friendly on Paradise is something that is going to be bypassed.

And so yes as of Alien Covenant we dont know if the Merger would be that 2099 it would have to be between 2094 and 2104 and to give a Window of a year either side for a most likely time between 2095 and 2103 but when who knows...  is the 2099 date something that Fox came up with in relation to where the Franchise was going back in 2013 i.e something Ridley, Fox and writers worked on?

But this could change as far as on screen now... but their is a good chance the movie would maybe not even tell us when the Merger happened...  or if David 8 was aware of such a thing, or that if this is a question that David would not ask.

So we may get little or nothing on when/how/why for the Merger...

To my knowledge, the date was arrived at because it had to be 'Weylan(d) Yutani' by 2122, and sometime in the years following the death of Peter Weyland and Meredith Vickers death seemed appropriate.

Yes this lead to lots of speculation at that time as we had 28 years for the Merger to happen, and it was just speculation and guess work then. on our part.

And we have to wander when Ridley and Fox where working out how to take the Franchise Forwards after Prometheus and prior to this book being worked on.. did they pass onto the Authors a date to pen the Merger as, or was this a date that earlier drafts touched upon?

So yes this 2099 could still change, but it does fall neatly between the 2094 Weyland and 2104 approx Weyland-Yutani.

To my knowledge there was no in-depth discussion as to when the merger happened nor the cir***stances.

As far as the source.... again i cant say for sure if they are 100% legit or not... they did inform me of things way prior to Ridley coming out and saying same things or things that matched.

The last thing they said they did include a important event as far as the Paglen/Green Draft 7 years prior to Alien Covenant and then how Two Important Elements had occurred some 25 years before Alien.

So while the source can not be taken as canon or fact... the point raised is still valid.... there are a number of things we have yet to cover and we have to ask if they would be covered from 2094 and 2122 in Alien..

*Do Weyland do the same, or just ignore the failed mission... how did they gain information... salvage mission or data being transmitted once its uploaded?

*Where and how does Covenant gain the co-ordinates to Paradise, surely its no Coincidence? and if its not then how much do those who got the directions to Paradise know about Prometheus Mission and Shaws SOS never mind LV-426

*Finally what event would cause a Merger of such rival companies.... people speculated what would become of Weyland after the death of Weyland and what appears to be his daughter Vickers too. So some speculated this would force Weyland to be Merged...

So yes a number of Events relevant to the Franchise have occurred between 2094 and 2122.... some of these would have occurred prior to 2104

The Question is which and when and if in any detail at all we shall find out.  And who knows maybe Paglen and Greens drafts where covering things a bit to deep that Fox felt was not needed and so Logan came on board... pretty much like how Lindeloff came on board to change the more Alieny and LV-426 elements to the Alien Prequel... Alien Engineers to give us Paradise that became Prometheus.