OvomorphMember0 XPApr-26-2012 5:23 AM[img]http://oi50.tinypic.com/28lv2g5.jpg[/img] You could see how Fassbender's legs hang from the edge of the seat like 5 year olds. Now Michael Fassbender is pretty tall, 183cm. Them Jockeys are not Giant but they are pretty huge. No giants in the movie? Well....
7 Responses to Size of Jockey Chair

DeaconMember10324 XPApr-26-2012 10:07 AMVery interesting image which confirms that the Blueguy is indeed about 9ft or more tall and thus i doubt a mutated crew member. Also i think in the far let we see Shaw... You can see a crew member who has a light.... This is the scene after the image you posted... [img]http://www.empireonline.com/images/uploaded/prometheus-noomi-repace-elizabeth-shaw.jpg[/img] Shaw must walk upto and lean against one of the ramps to the centre of the Star Map Room etc, she and David must talk about what its purpose is. After this David activates something which leads us to the Hollogram scene only in that Scene David is alone and so question is where is Shaw and how far away does she go while David activates the Hollomap.

OvomorphMember0 XPApr-26-2012 11:52 AMI don't know, but I just realized, after studying my desktop image of the Prometheus space ship, that it looks like a huge predatory bird. The glass area, where Janek stands, looks like its tongue. That's intentional, I think.

OvomorphMember0 XPApr-26-2012 2:53 PMNot directly related to the original post, but based on the static visual, to me the chair looks hokey - something about the construction of it makes it seem too much of a humanized conception of what an alien 'chair' would look like...versus the telescopic turret or whatever from the original derelict, which seemed genuinely foreign. I don't know, but something about the image (maybe the swivel leg base? ) makes it seem like it was purchased from the "fill-in-the-blank villain from Star Trek" furniture store. 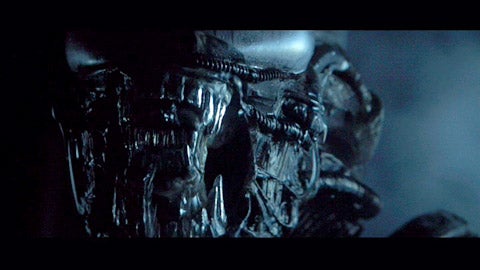 OvomorphMember0 XPApr-26-2012 3:34 PM@coast of orion I agree, the chair should have looked more like it was growing out of the floor and had a significant biomechanical structure. It´s not really integrated in its surroundings and seems too polished. Someone went to the furniture store and asked for something "Giger'ish".

OvomorphMember0 XPApr-26-2012 3:40 PMIt will look a bit plastic with it being just a photo from on set, as you can see the cameras behind Fassbender. I'm sure with the right lighting for the film it will look more legit. What's interesting is that you can clearly see (if you enlarge the image) is some sort of burn/melt mark on the "sarcophagus" in the background. Possibly implying something forced itself out?