OvomorphMember0 XP01/1/2012On December 23rd, 9 days ago, "TotalFilm" interviewed Charleze Theron and asked her a very interesting question noone had asked her yet regarding Prometheus... TotalFilm: Are Xenomorphs bursting through chests in Prometheus? Her interesting reply...?... Theron: “Maybe! I mean if you’re a Ridley Scott fan and you love the genre, then you’re going to be happy. You’re going to be very, very happy.”
22 Responses to New Theron Comment is a "Doozie".

OvomorphMember0 XP01/1/2012That's a really good new... I never thought that prometheus was was so connected to Alien...
Have you heard of phoenix asteroids? They glow in every color of the rainbow...they travel endlessly through space...

OvomorphMember0 XP01/1/2012I'm going to be happy anyway. I've been wanting to revisit this genre for years now. No not AVP, Ridley's universe. His vision is unblemished by the franchise's need to amp up the military action to the point where it becomes Rambo VS Xenomoph ACID BLOOD PT IX

OvomorphMember0 XP01/1/2012and WTF I saw all those damn ads on the thread from this morning. Wow what happened?

OvomorphMember0 XP01/1/2012Me too "Ghost", Great point and I hope you had a pleasant new Years eve. I noticed it this morning, Looks to me like spammer hit the site and tried to highjack some traffic by blasting it with adds for his own interests. Pretty sure BugHunter should have a back end app that allows him to delete them all as spam...and depending how good it is he may be able to do it all in one stroke with what is commonly known as a "batch command", I am sure in a few hours or days it'll all be gone. Best Regards man Missed ya!

OvomorphMember17 XP01/1/2012I got the impression also from early on that Theron was a plastic. But having seen the trailer no way

OvomorphMember0 XP01/1/2012in another site they put it a bit in a different way ( but for us makes alot of difference ) ---On whether there’ll be anything in Prometheus to compare to the original’s chest-bursting scene, she cryptically said, “Maybe! I mean if you’re a Ridley Scott fan and you love the genre, then you’re going to be happy. You’re going to be very, very happy.”--- so is not about a chestbusting scene but something of the same visual impact

OvomorphMember0 XP01/1/2012gotcha makes perfect sense. Tx Frantz P.S. it also sounded similar to comments attributed to her from the comic-con interviews But I checked and the question was asked of her 9 days ago by "TotalFilm".

OvomorphMember0 XP01/1/2012I remember that one of the very first gossips about the film were about the SJ doing some abomination to humans, like, trying to mate two males. In some scenes of the trailler, we see Rapace in some strange scenes like she´s being impregnated against her will, or giving birth to something. I think that´s what Theron must be alluding to.

OvomorphMember0 XP01/1/2012to be honest ive never read something about the mating of two males :)) ... the only font is Scott speaking about "perverse things" the "gods" do and i think he was referring to DNA manipulation ... even with the giger influence ( while painting murals ) i find the two male thing a bit ...impossible . Im sure there will be some shocking horror but will be a surprise :p

OvomorphMember0 XP01/1/2012I did read the alien resurrection script many weeks before the movie was out and was quite enjoyable to read ....that harvest script got me bored after 10 pages i hope is really a fake from Spahis because its terrible .

OvomorphMember0 XP01/1/2012Frantz, "Alien Harvest" was probably a fan-fic, although it certainly fooled pretty much everyone. As someone on IMDB pointed out, if you take a look at scripts which it's confirmed were written by Spaihts, (Shadow 19 and Passengers), there are subtle differences in the prose which imply that Harvest was a fake. Fortunately! ;)

OvomorphMember0 XP01/1/2012Frantz. 6 weeks ago, John Spaihts himself, the real one confirmed definitvely that he DID NOT write "Alien Harvest", someone with an agenda did, he also suggested more than likely a failed and disgruntled screen writer who wrote it.

OvomorphMember0 XP01/1/2012WOW!! So I figured out the best way to cure my insomnia and that is reading this John Spaits Alien Harvest script. I am sorry to sound like an elitist but this is pretty lame! If this is tied to Prometheus hopefully Ridley and some of colleagues can modify this story......well more like give it a facelift. I mean with Sci Fi I am very very open minded but this just screams " lets just slop something together for the Space Jockey and make some money this summer!" Spartacus that post about the report LV 665 was pretty cool! I am sure that the Alien Harvest script is not the finished product for Prometheus. I know this movie is gonna be awesome. My issue is that why don't these people ever look into what Dark horse comic has put out and work with that actual story? Those comics are so good! 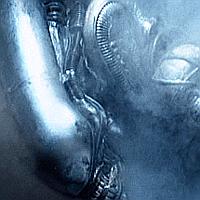 OvomorphMember0 XP01/2/2012I wouldn't read too much into contradictions between Theron and Scott. It sounded like Scott was explicitly referring to the big creature in the original Alien when he ruled out the Xenomorph returning. But the creature itself was based on the idea that it assumes the form of the host and its inpregnator (something Scott mentioned happens in nature). Theron is likely suggesting the process is the same (ie. yay chestbursters) but I think it's going to be something very different popping out this time...

OvomorphMember0 XP01/2/2012My biggest issue with the Alien: Harvest script is the complete disregard to the English language throughout. I could not get more than a few pages in before I had it with the typos, incorrect spelling and horrible grammatical errors. I knew right from the outset that this was not written by a professional scriptwriter.

OvomorphMember0 XP01/7/2012http://www.imdb.com/title/tt1446714/ Prometheus has Cocooned man - so your probably getting some type of creature.

This is so funny, Jon Spaihts was so tight lipped about his script and someone releases a parody and even the fans run to defend it. I wonder who the clown was who claimed it was Jon's.