In an interview with Kaya Savas, Gregson-Williams spoke about his beginnings and career as film composer, but during discussion about his work with late Tony Scott he mentioned that he also did music for numerous Ridley Scott movies from Kingdom of Heavens (replaced Jerry Goldsmith), to Prometheus. Prometheus was actually composed by Marc Streitenfeld, but Ridley brought Harry to compose few more tracks for the movie, so he did two important tracks (Life and We Were Right). Williams also collaborated on music for Exodus, and composed full soundtrack for Ridley's latest movie Martian, after finished speaking about those soundtracks Harry officially confirmed that he will be doing full soundtrack for ALIEN: COVENANT. So thats it. Harry also noted that he adores to compose tense music with strange spooky atmospheres, adding that he always very much admired Ridley's specific way of filmmaking and very sharp eye for important details. He said that he ll start composing Alien sometime near the end of the year.  Harry also expresed how excited he is about Alien: Covenant project... So if he is to start composing in November (for example), that means that movie is all done by that time. So why publishing it in the October of 2017?

Can I edit my post (editorial)?
Whenever I try to edit, there is only a blank page...???

I would like to put this picture
instead of that random... I dont know how that random even appeard, because I uploaded picture I made... 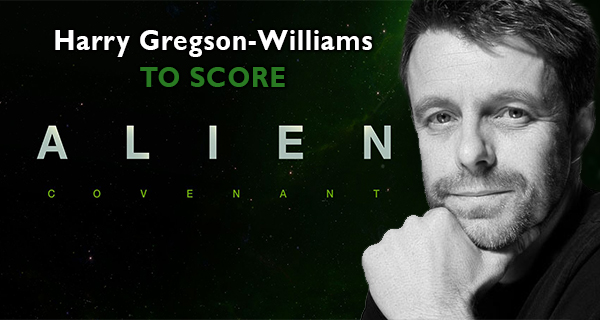 I see you added a second post, I've fixed the two and removed the duplicate. When posting, after you click "Publish Editorial", you should be taken to a page that asks you to upload your banner image. You shouldn't need to edit to add the banner, it should be available right away.

But, as for the blank page error, please send me a PM we'll get this sorted!

I like HGW. I really do. His material in The Rock, the Metal Gear Solid games, Chronicles of Narnia, etc is grade-A music. But lately he's had a tendancy to underuse his themes--Which is where he excels. He comes up with really beautiful, fitting and sometimes groundbreaking, leading motifs and then doesn't do a lot with them. He's not much for giving his own genius variation which isn't very... welll... genius. I hope he changes course, not just for the sake of this film, but others he works on.

Well he spoke about that in interview... He never studied composition, only orchestration and all thing about music except composing... Two tracks that he did for Prometheus are phenomenal so, I think that he will be great...

I wrote all about music of Alien and what elements soundtrack for Alien needs to contain Prometheus 2 music?

So orchestral music with strong strings and brass, and some deep ominous chorus in background with some technical alterations (+bells and harps and electronic manipulation) is fine... and I like that kind of music similar to classic composers like Holst or Wagner, a bit like Sibelius... But Alien themes needs to be more with striking  ominuous strings, horns, and electronic elements (and it needs to be spooky; quiet and loud at the same time)... with dissonant and polymorphic sounds... Music of Alien need that feeling of organic and mechanoid and corrupted yet perfect... that music needs to reflect fear in its pure form...

I really like his track he composed for prometheus called Life.

I'm with you guys, I think this is a great choice. Looking forward to hearing what he creates for Covenant!

I think its a Logical Choice his tracks for Prometheus were Good and he has worked a lot with Ridley Scott.

Be interesting to see what kind of broad theme the track would be for Alien: Covenant

I think it's a great choice in theory. But if continues to save his best pieces for opening and closing moments (again) it would be a real shame.

Check-out his soundtrack for X-Men Origins: Wolverine. Maybe the movie isn't that good, but the soundtrack sounds great and it's tone would probably fit well with adventure elements in  Alien Covenant. I don't know about his previous work with elements of intense horror or suspense, though.  Maybe someone can cite examples of his work in those areas?

X-Men Origins: Wolverine is a primary example of what I'm talking about. Amazing main theme and uses it, what? Three times the entire movie? Four if we include the end credits?

Everything is fairly run of the mill in the score. Not bad necessarily, just not very memorable either.

For more suspence driven scores by him I recommend The Number 23, Blackhat and maybe The Equalizer to some extent.

BigDave replied to Aliens Mistake Discovered, pointed out by BlackAnt