Before there was Scified, before there was even the Sci Fi Movies Network there was Prometheus-Movie.com. A small and simple news and discussion site that became so popular that when the official Project Prometheus site was launched it featured our very own “Design the Adult Deacon” competition. Big Thing do indeed have small beginnings, as we have since grown into the Scified Network, but we have not forgotten our roots, our humble beginnings. And with news that Ridley Scott will soon be filming the eagerly awaited sequel Alien: Paradise Lost it seemed like a fitting time to give back to our members, fans and followers.

For the past 4-6 weeks, I, Gavin Singleton, Scifieds Managing Editor and Graphic Designer, and the longest serving staff member (just, Svanya is a close second) have been hard at work in secret while attending to my many duties in my personal life and on Scified.com to bring you all something special, something for our community. We proudly present the accumulation of those six weeks hard work, Scifieds first ever graphic novel – Prometheus Absolution.

Prometheus Absolution is a 20 page graphic novel (including the covers) and combines manipulated stills from the movies within the Alien/Prometheus franchise, as well as selected concept art and fan created art to delve into one of the franchises many secrets. We all hope you enjoy this graphic novel as a free present to all and as always we look forward to hearing your thoughts, insights and feedback. Have this one on us and enjoy... 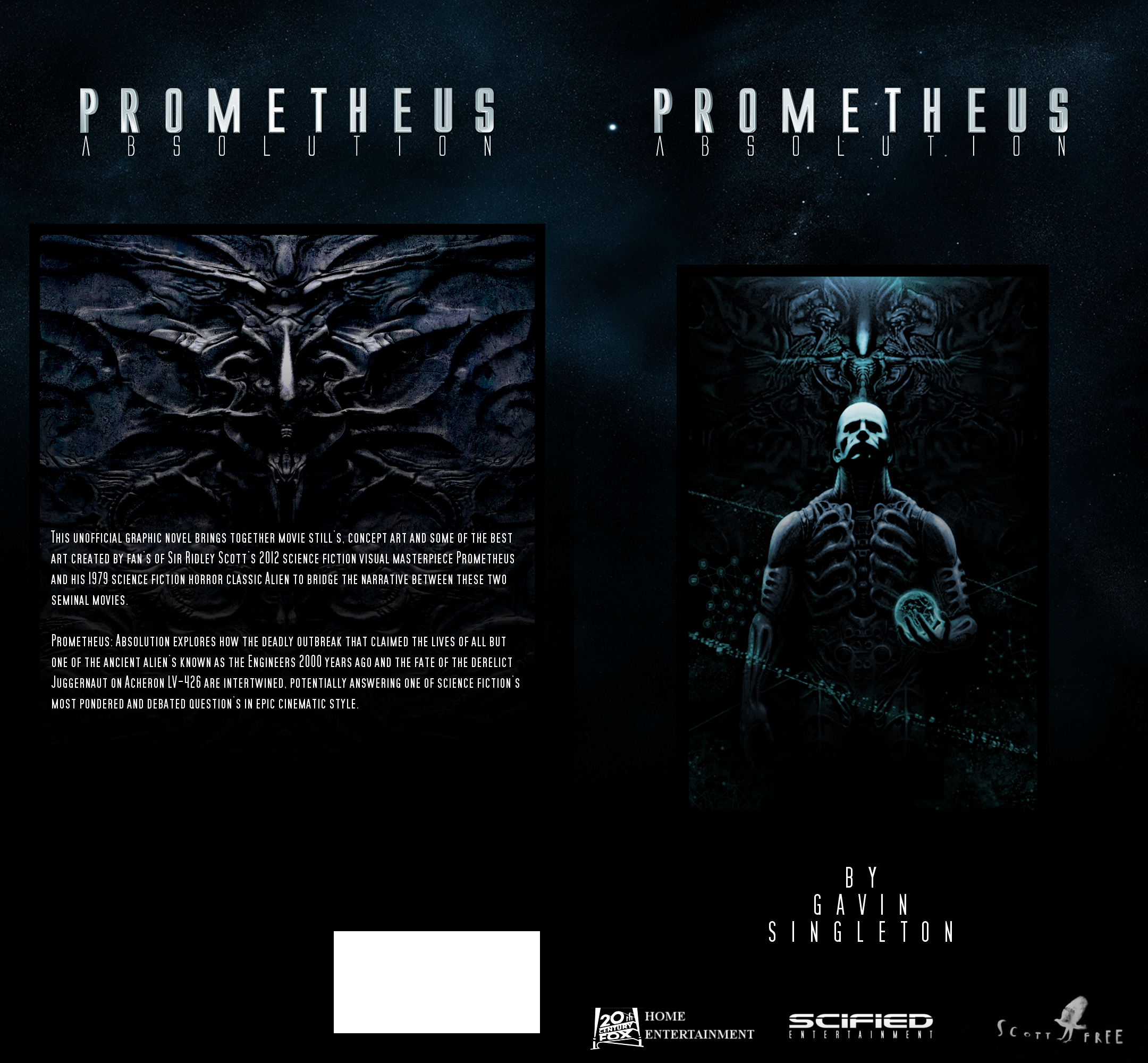 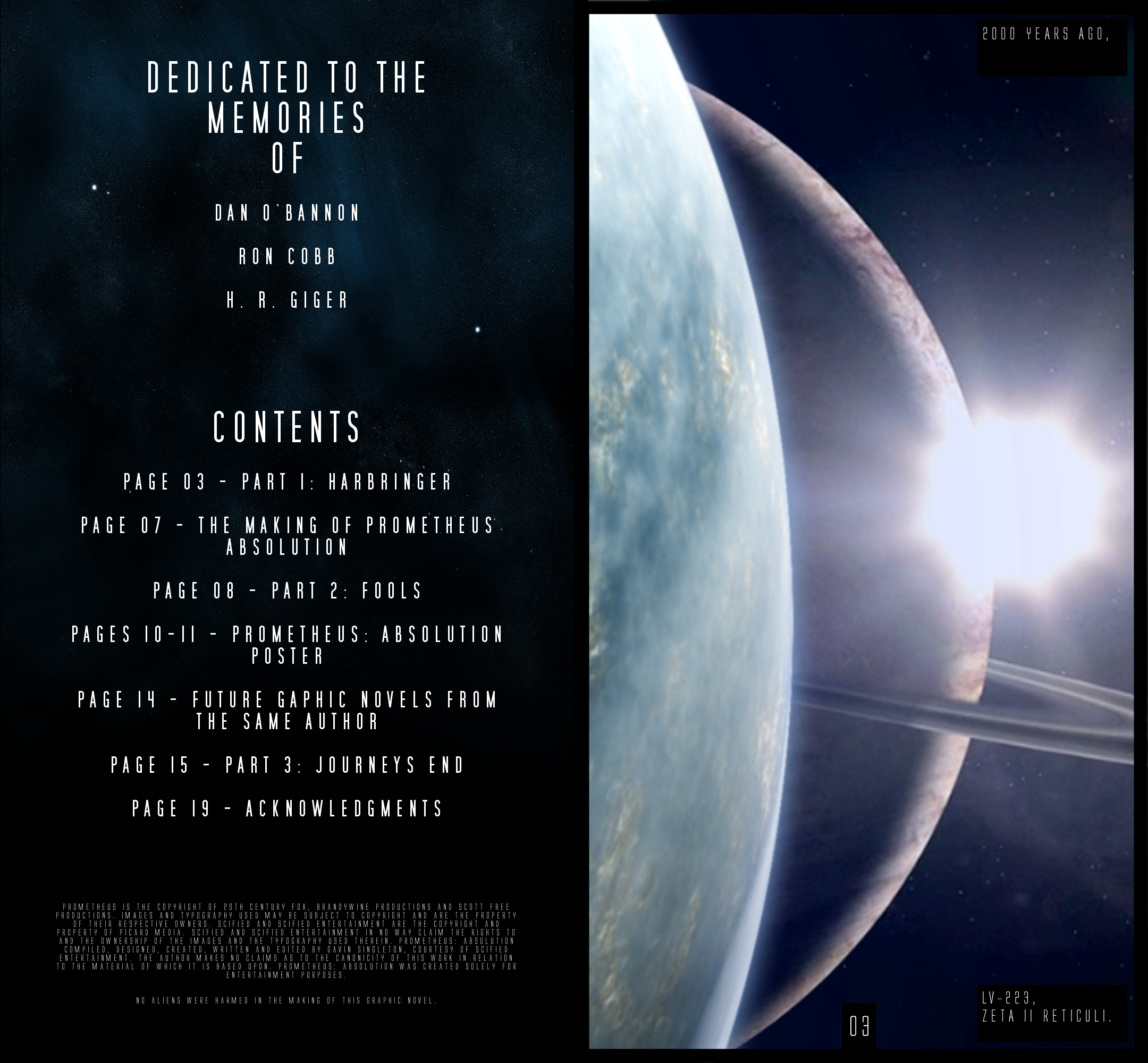 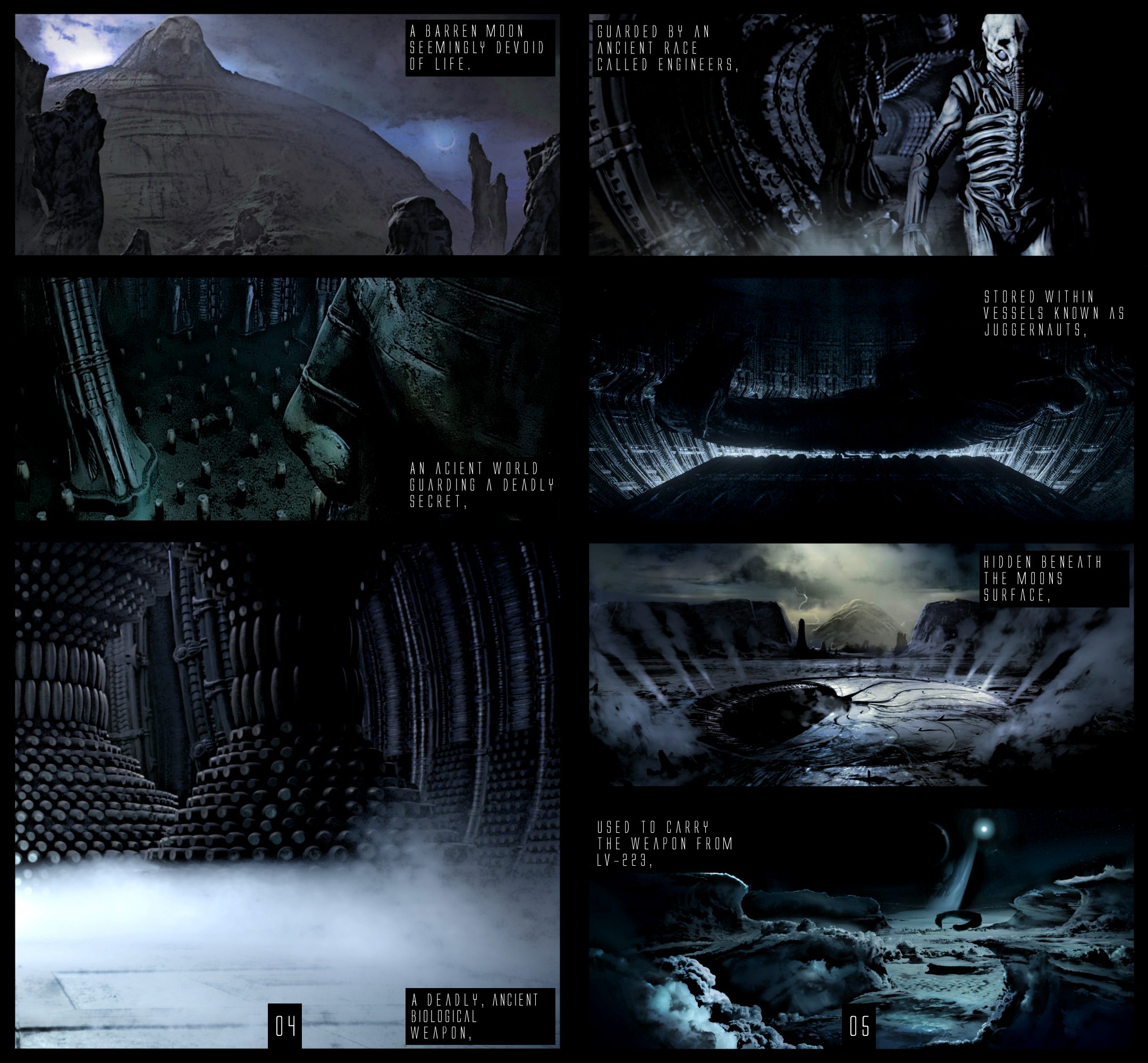 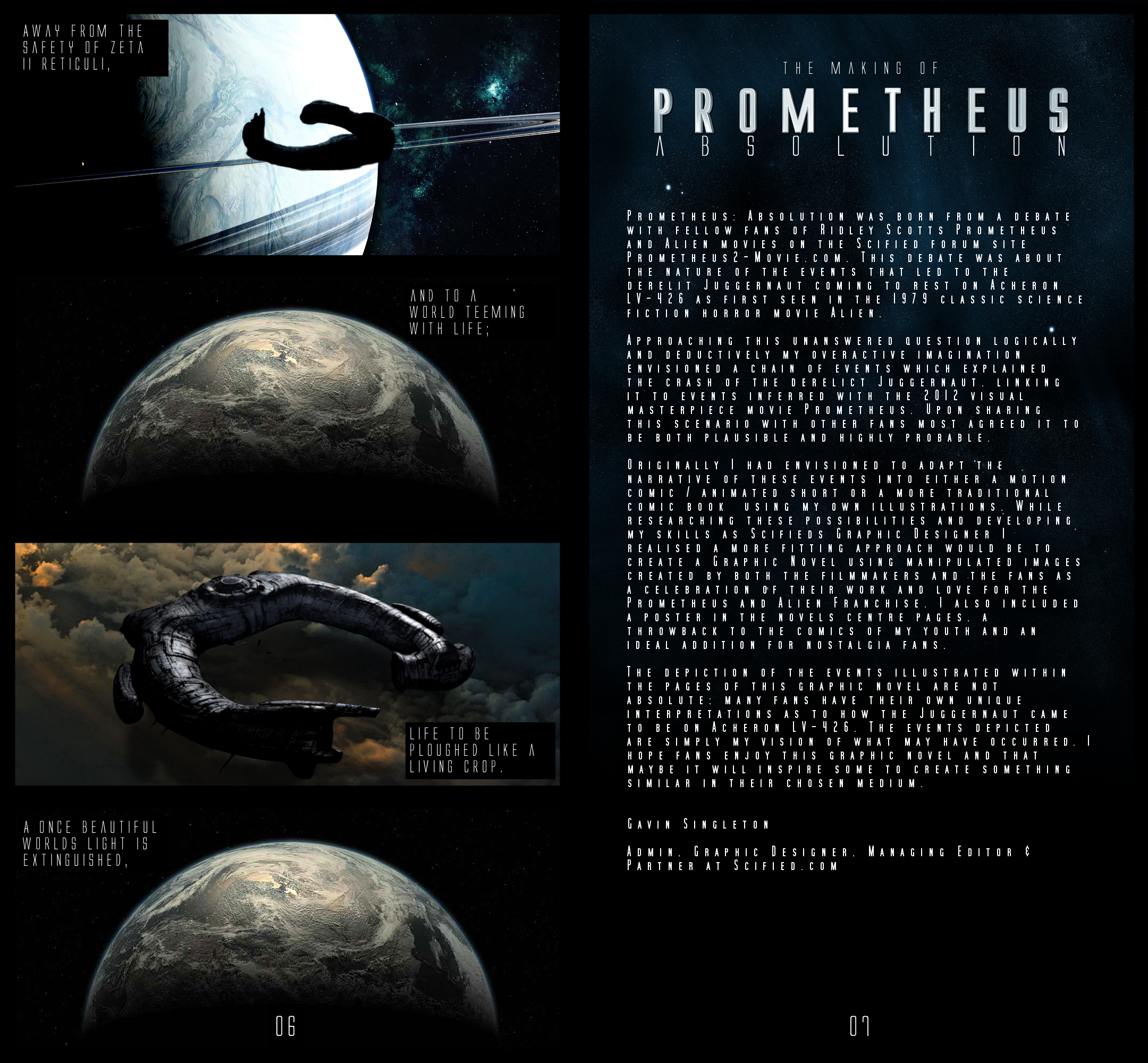 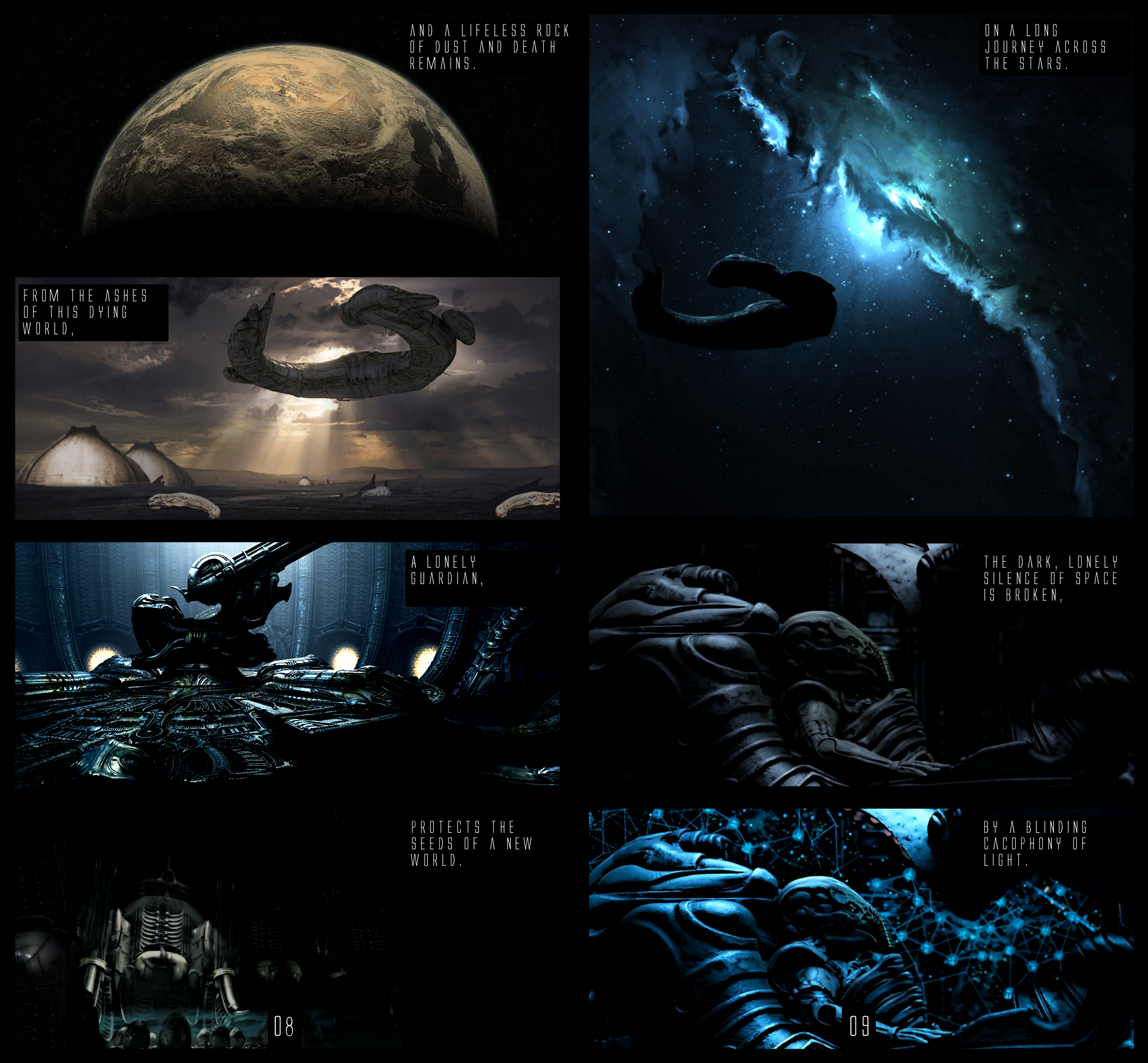 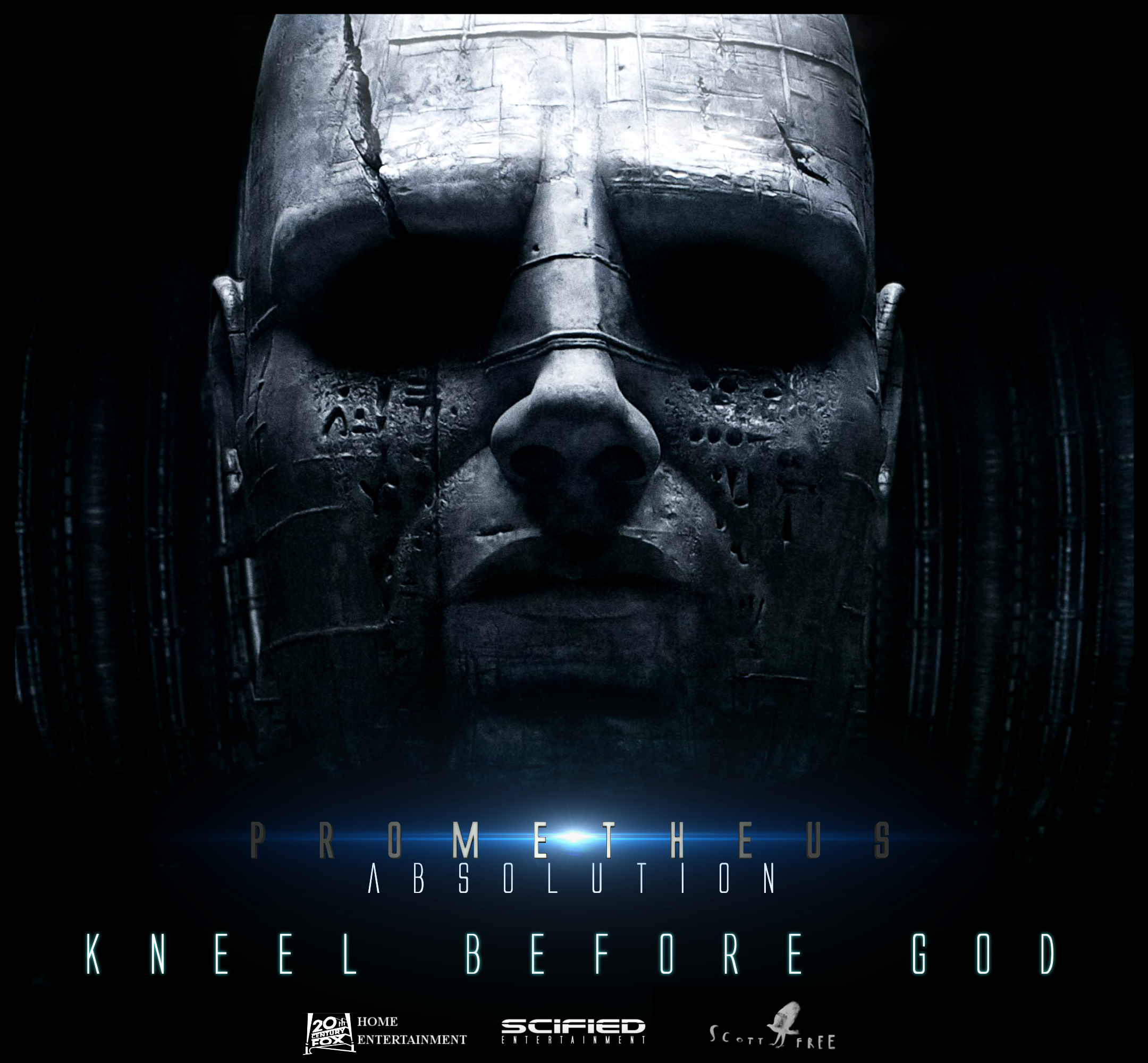 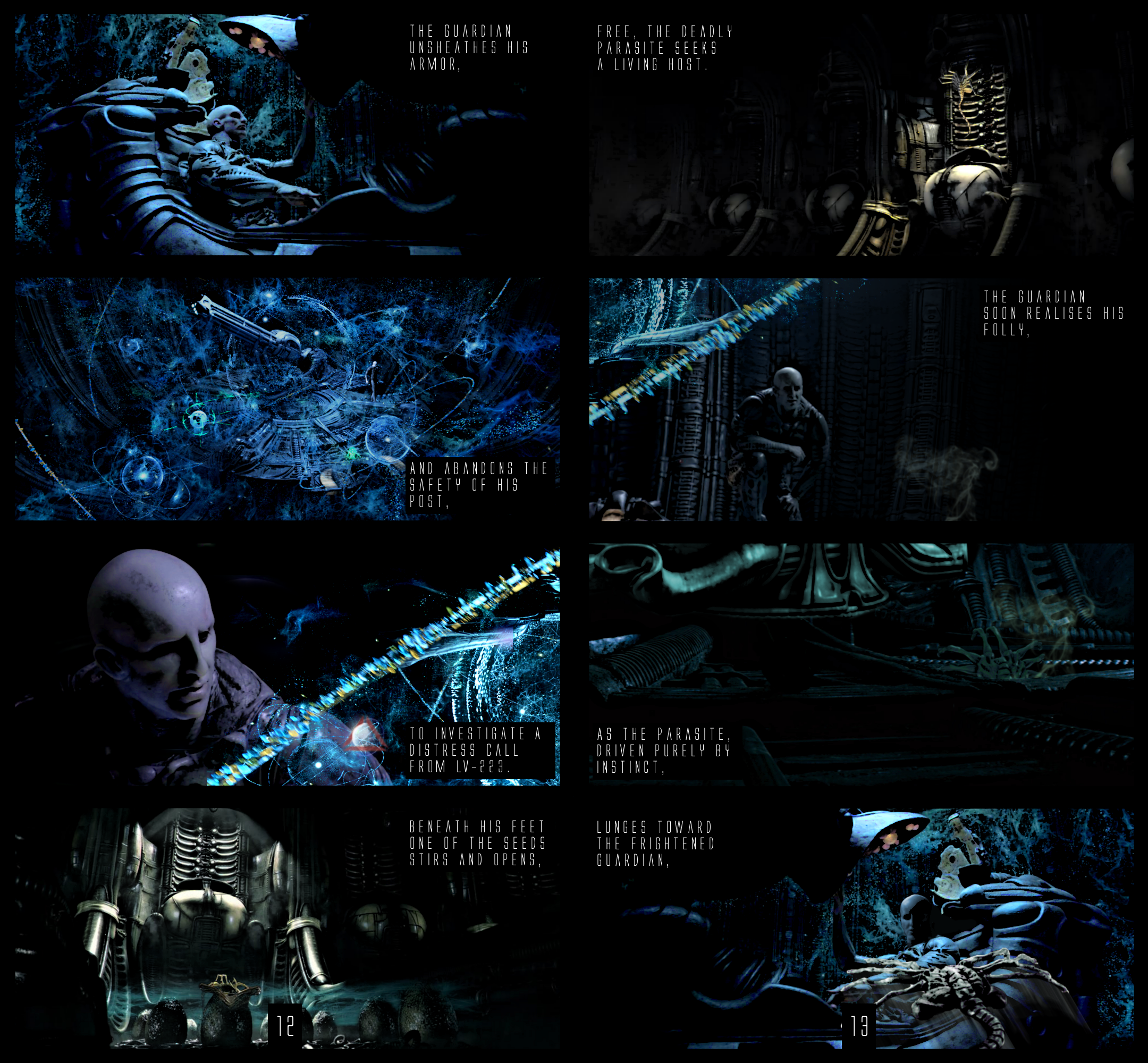 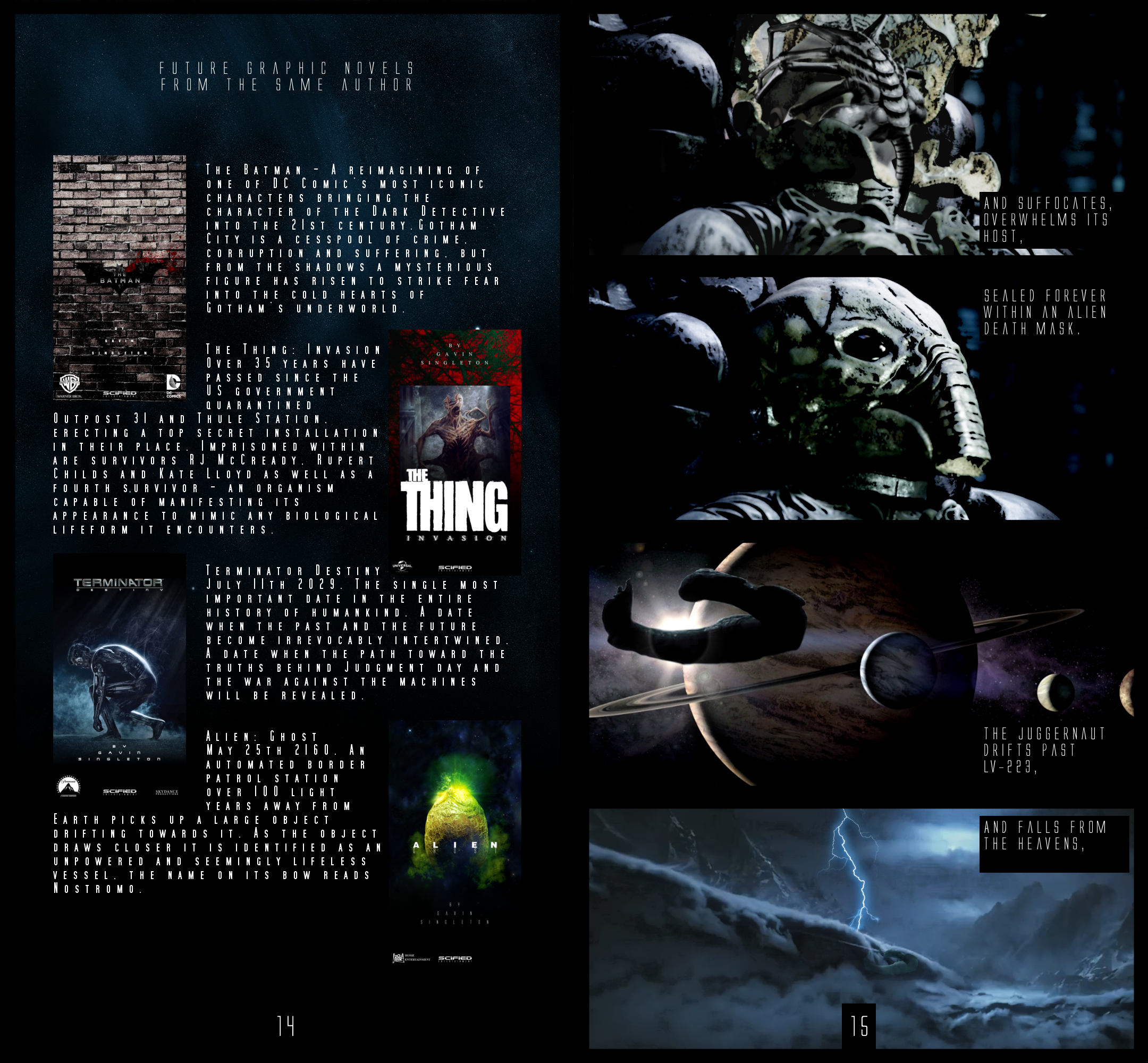 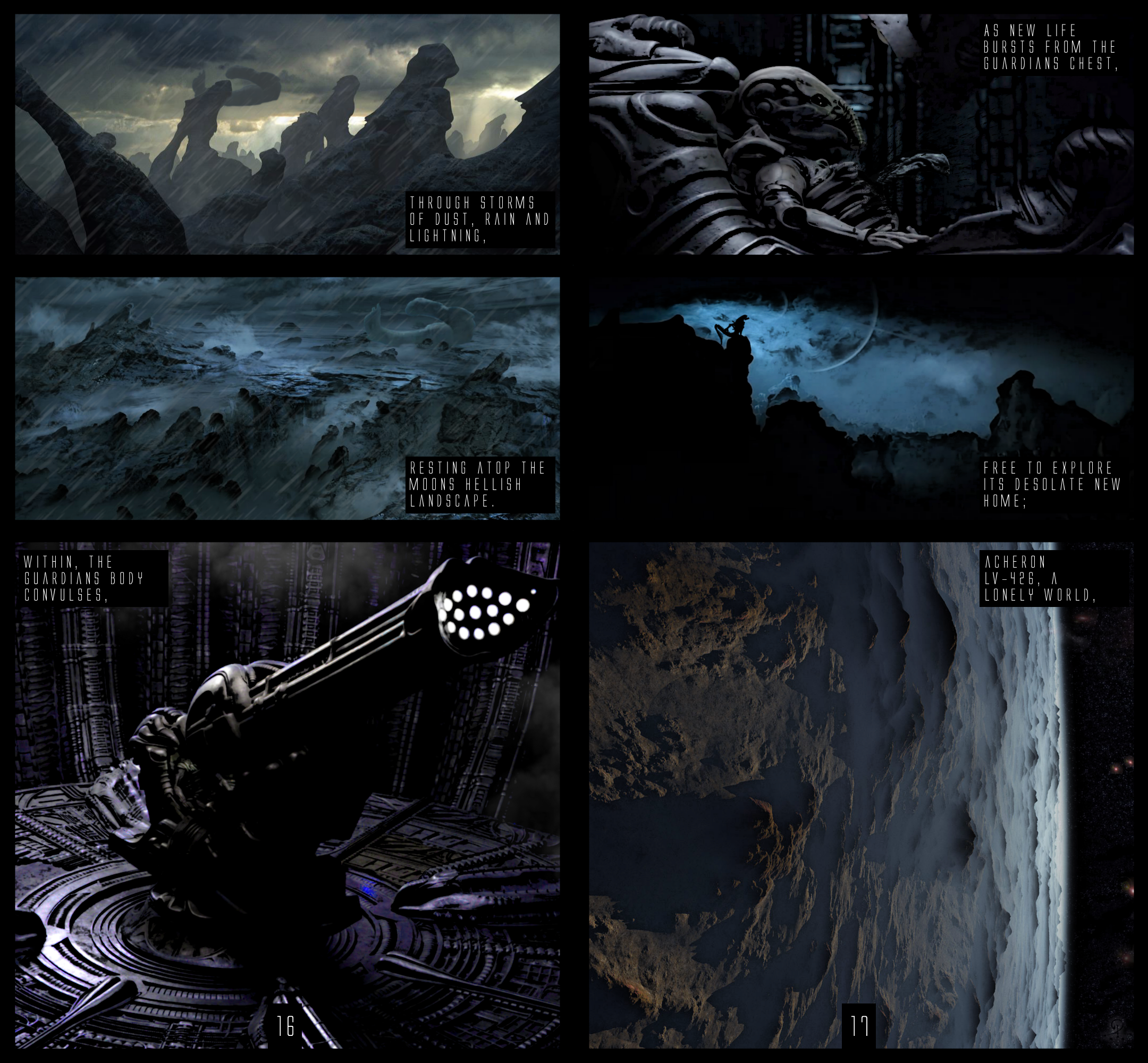 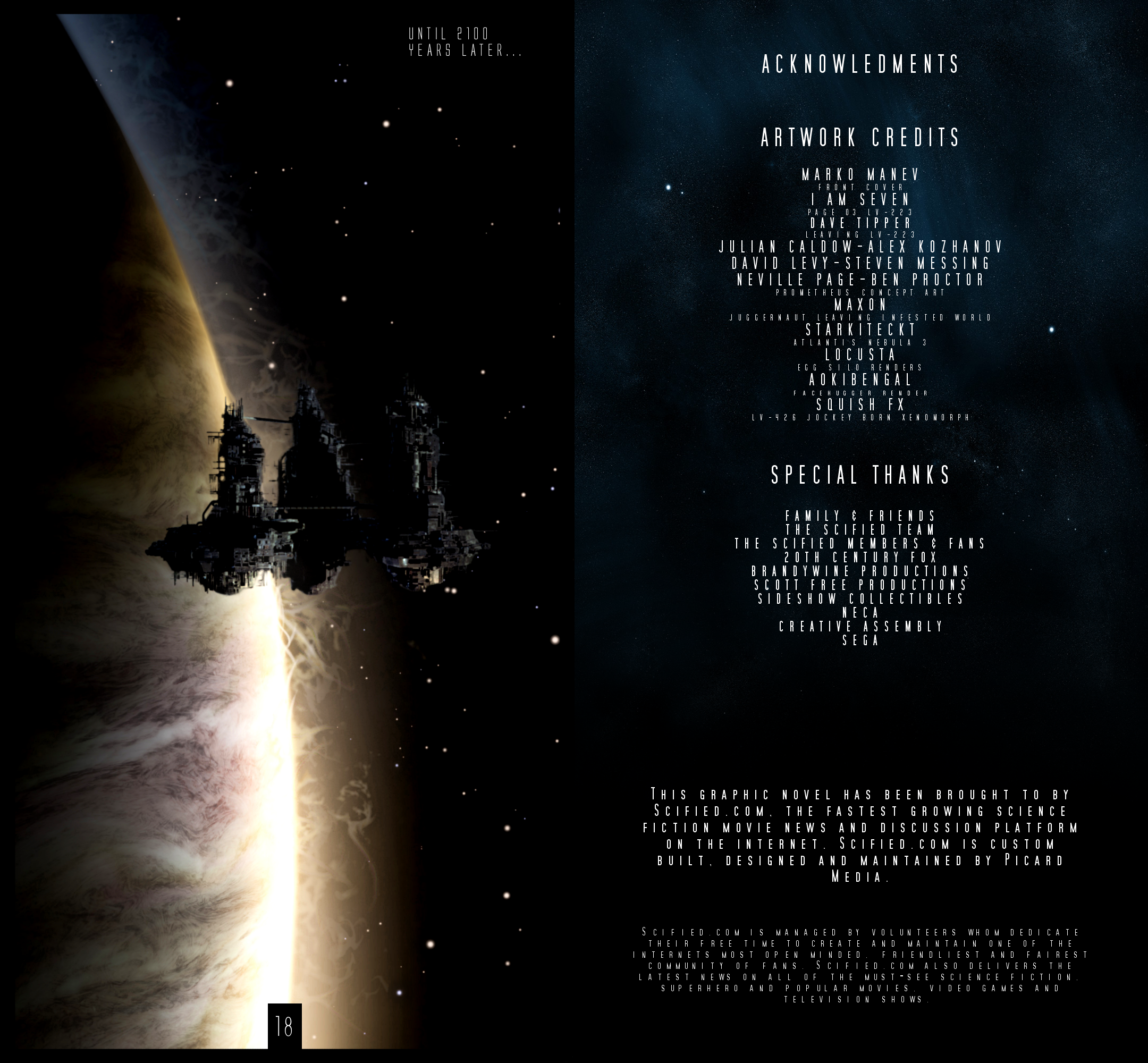 GAVIN SIGLETON - Few words would suffice to describe the magnitude of what you have achieved with this presentation. The best word I can utilize to explain my frame of mind while viewing your work is "captivated". This is a stunning work of visual art that is made all the more enthralling by the story to which you have set it. I am delighted and honored in the extreme for having been given the chance to enjoy this exceptional presentation! I can only imagine the feelings of relief, excitement and anticipation you must be experiencing now that you have completed this phenomenal graphic novel and have placed it forward for all to see. Rest assured; you have won an avid fan with your hard work! *ahem* And now for my girly outburst: FACEHUGGERS ARE SO GROSS! Sorry; I could not contain it. ;)

That is an awesome present for all of our members. Thank you Gavin!

I've been around since the original Prometheus-Movie.com. I joined not long after losing my Dad, I was pretty down and missed having him around to talk movies with.

The site went a long way to filling that void. It's always been full of great people, both staff and members, who've made it a pleasure to visit. That's why I'm still around.

Good Work Gavin Especially on the Manipulation of various works of Art.

I am not sure if the Space Jockey Story is one that would ever be told as in a direct route as you have tried to do, Ridley did say by the time he is finished with his Project we would be able to get all the answers however....

The idea you laid down is on that is plausible (that the Derelict was a Ship sent to investigate LV 223 after the Outbreak 2000 years ago) And maybe the SOS of the Space Jockey was not a warning about his ship but the Outpost too and this is why the Engineers never came back.

The idea the Face Huger is what caused the Acid Hole in the Floor of the Pilot Room is interesting one and one that would removed the need for the Engineer to go and investigate the Cargo Hold which would be a silly idea for him, if hew knew what the Cargo was....!

The Face Huger is the only Organism in the Franchise (not including AVP movies) that can release its Acid by a means that does not require it to be injuried so this does fit.

I will be planning to make a ULTIMATE SPACE JOCKEY thread one time where we can debate this Topic and examine all clues and potential inconsistencies in what we see, and Ridleys comments to try and come up with a few reasons for what went down.

But the version you gave is similar to one of 3 explanations i had, only slightly different.. but none the less very plausible.... Well done ;)

BigDave, I recall the dog alien from Alien 3 had the ability to spit acid from its mouth. Perhaps this was from the "Director's Cut" and therefore not considered canon? this "graphic novel" is mediocre at best, half of it being just credits and acknowledgment to the writer. Like really.. And I don't see how it bridges any gaps inbetween movies, seeing on how the Alien crew never encountered any kinda creature that was born of an engineer. But nice photos This is awesome. I love it a lot. I think it's the perfect story that explains how the Derelict crashed which I wish Scott explained in Prometheus while still letting it go its own course, as oppose to waiting 4 movies till we find out. This was really great and I enjoyed it a lot. My favorite part was how the Facehugger is still under that helmet. Course I also kinda wonder what happened to the Alien on LV-426, where did it go? I actually wrote a story detailling that invovling the Ultramorph (Space Jockey spawned Alien) that was originally planned for Prometheus. I plan to make that an animated movie sometime. Before I got into animated movies, I made photoshop comic books just like you, we have a lot in common.

Out of curiosity, did you ever make those comic books about Batman, The Thing, Terminator, and Alien? Cause I wanna read those too. You did a great job and I wanna see more of your work, I actually started an account on this site so I could ask you that. Please let me know. Thank you.

Thanks for the Kudo's people, I'm glad most of you enjoyed it.

As for the other graphic novels; I have been putting some thought into the Alien story, which would be more of an opening scenes idea in which would show the opening few minutes of a movie proposal I have in mind that could widen the range of the Alien universe, while leaving the canonicity of the existing franchise intact; a kinda side-quel similar to what Prometheus was meant be.

Thanks for bumping this Gav, nice to look back on this now that Covenant is in production.

this is beautiful! thank you for sharing this with all of us!!!

this is beautiful! thank you for sharing this with all of us!!!

I can feel the loneliness of the Engineer.

dk commented on Marvel now own the rights to Alien and Predator! from the Alien: Covenant website!

NTFS commented on Marvel now own the rights to Alien and Predator! from the Alien: Covenant website!