Thanks to a trusted source who worked/is working close enough on the upcoming Prometheus sequel, we bring you an exclusive update on what the new Monsters in Alien: Covenant will look like and where they come from. This follows our article last week which shared some information regarding the plot outline for Alien: Covenant. Up until this moment, the information our source has shared is about 80% accurate when mirrored with what official sources have claimed and revealed. However, as we mentioned in our first entry to this Discovering Alien: Paradise Lost series, please take what we say with a grain of salt – especially since word has recently come up that John Logan has been hired on to revise the film’s script. The information we are about to share is current as of fall, 2015, when the initial draft of the film was completed and greenlit.

According to our source:

“The movie will have 2 Monsters, one is new and both are different yet similar to the Xeno DNA. The NEW Monster is a New Event, so it’s nothing created before the Events of the end of the First movie.... it's created by an event in the movie... and this New Monster is going to be based off of the Original Concept that Alien drew influence from, and this idea is something they had planned with Spaights’ Ultramorph and so Gigers Necomonicon 4 is the starting point. This Monster will be transparent like a Jelly Fish to a degree.... and it’s hinted that David plays a part in its creation.

The movie won’t be going the route of an Alien movie, just we will see more clues and things that we can relate and make connection to the Xeno DNA and Bio-Mechanics of the Engineers.  The movie will loosely touch up on themes that can connect to the Prometheus Mythos and the Bible but more in respect to the Paradise Lost version of events but again loosely.

They won’t be going a full blown Ancient Aliens in detail on us, just we can make subtle links to themes, such as Rebellion, Order of Creation (that has multiple layers that does not start with the Engineers and does not end with David). Stealing of Forbiden Knowledge and Fire and how playing God and going against God always has dire consequences.” 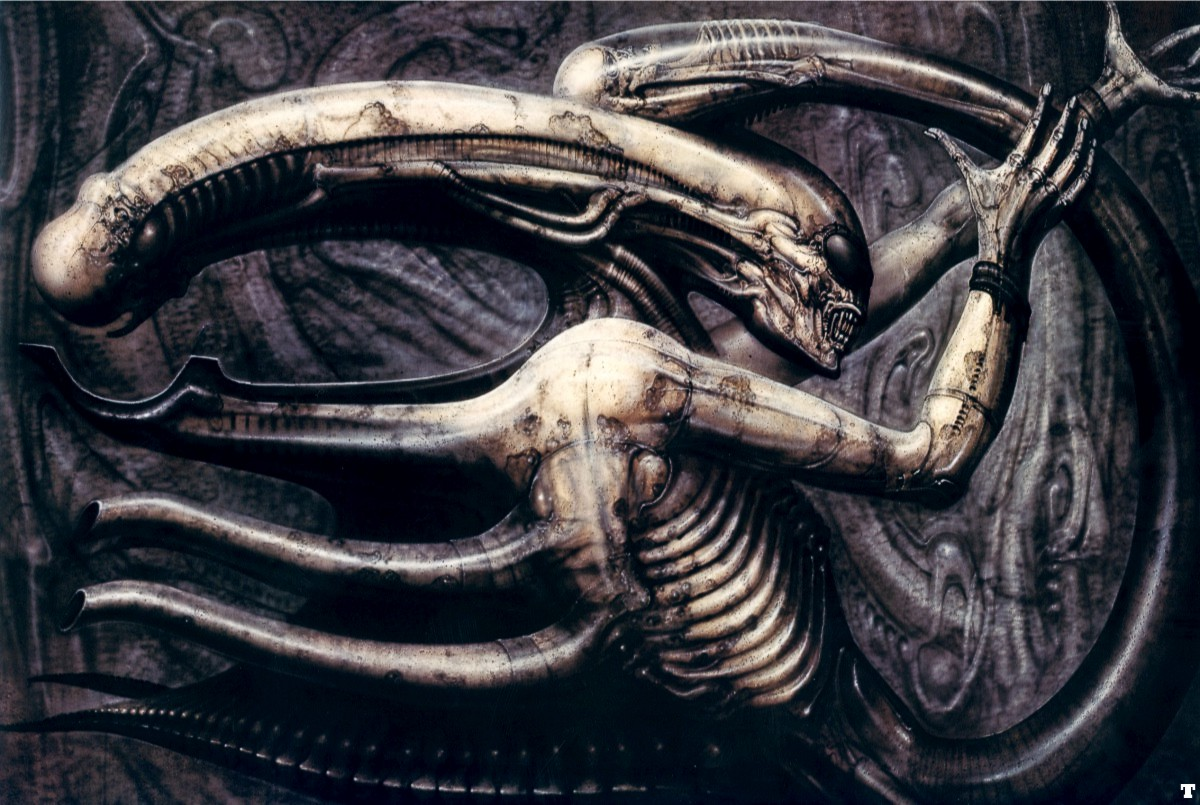 Note, the source claims one of the monsters is new, yet the other is not. This could suggest the Deacon continues to play a role in the sequel to a degree. However, this new monster will be created after the events of Prometheus and possibly even with the help of David? Could David pull another fast one on someone else and impregnate someone/something else the way he did Hollaway? This certainly seems like the direction our source is hinting at.

Another thing to consider – the motivation behind this new alien is Spaihts’ ‘Ultramorph’, which played a role in his original draft for Prometheus entitled Alien: Engineers. In his draft, an Engineer gave birth to an Alien, but because the Engineer is much larger and more powerful than a human – as the Alien draws traits from its host – the spawn was known as the ‘Ultramorph’ and towered over its human-born cousins. The concept was scrapped for the first film, but concept art reveals what the creature would’ve looked like: 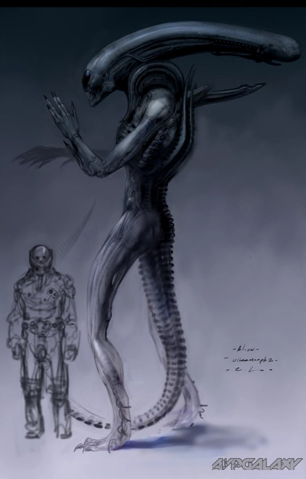 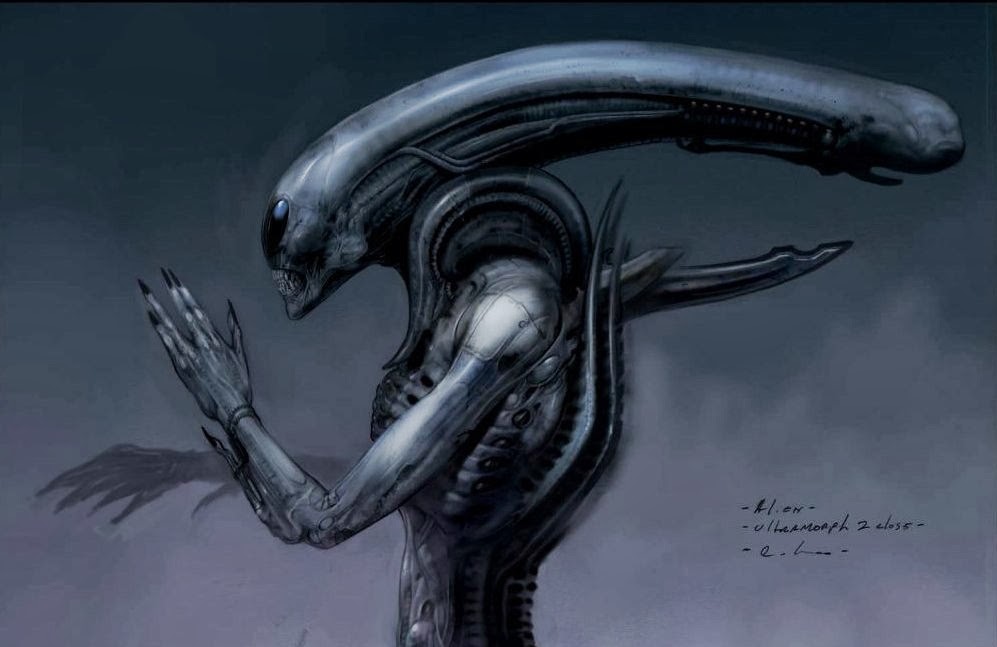 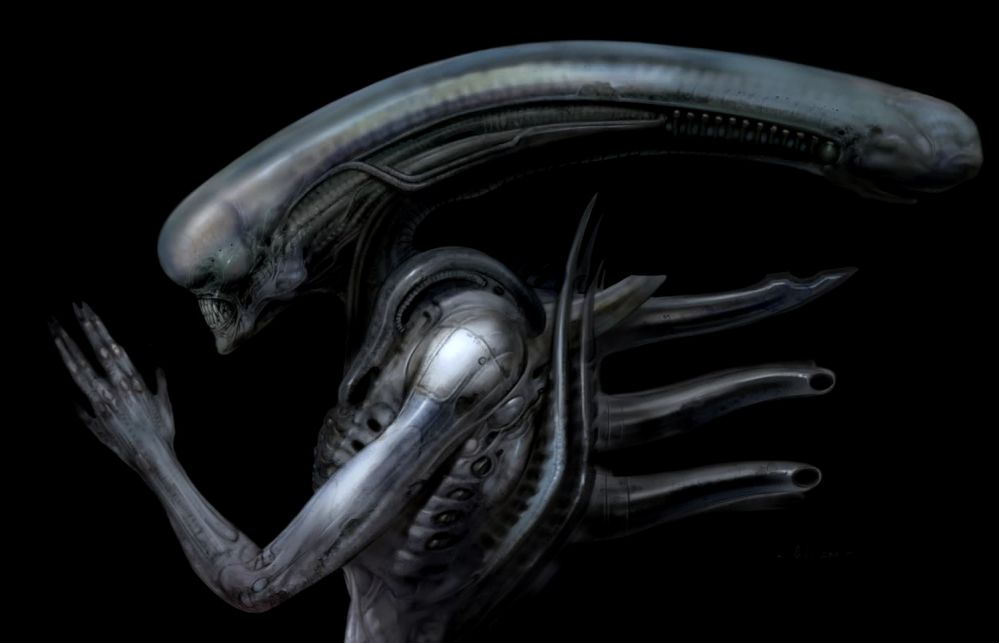 We’ve got a bit more to share, but we’re going to wait until next week to reveal it. For now, we hope you enjoy this little insight to Alien: Paradise Lost. As filming begins in January and February, some of the themes and leaks we’ve provided should become more apparent, assuming John Logan doesn’t change too much of the script. As always, keep it locked here for the latest news and scoops on all things Prometheus! We’d also like to give a very special thanks to our anonymous source for the incredible job relaying this information to us. Check back next week for more…

A translucent one could be obscenely interesting, obscenely.  ^_^

Chris states that "In his draft, an Engineer gave birth to an Alien, but because the Engineer is much larger and more powerful than a human – as the Alien draws traits from its host – the spawn was known as the ‘Ultramorph’ and towered over its human-born cousins. The concept was scrapped for the first film"

Was it? In Prometheus, an Engineer DID give birth to an Alien. So could an Ultrmorph be a full grown version of a Deacon? That Deacon was about human size when it was born. So it would be gigantic like the depiction of the Ultramorph when fully grown.

I believe the Ultramorph was conceived by means of Facehugger > Engineer > birth. The Deacon is a mixed reproduction starting with the impregnation of a human, which spawns a proto-Facehugger, which then impregnates the Engineer. They result from different processes which suggests the Deacon will mature to become something different to the Ultramorph. However, anything is possible.

Yes the Ultramorph was via some event related to Chest Buster and thus we have to assume i type of Facehugger, in Spaights draft they was working on one of the Engineers being alive in Cryo-sleep.... this Engineer was awoken and he was furious at the Humans because by waking him up they had now sentanced him to death... as he had gone into Cryo-Sleep to prevent him from being Chest Busted...  which was a fate that the other 3 Engineers had suffered.

The Concept Work shows this and they looked more like traditional Space Jockey Suits with same sort of Chest Busted holes.... it could appear that Production elements had been started with Prometheus before Lindeloffs Draft was read to shoot... in fact looking at the Production History this seemed to be the case.... maybe the Props for Chest Busted Engineers and the Pilot Room were already worked on and completed?  That could explain why that Scene fits in well with Spaights draft... but leads to some serious Questions with Lindeloffs and the final Movie we got.

As far as the Deacon, yes this is a result of a Human Egg and thus basic starting point being infected with Xeno DNA to produce a Face Huger/Human Hyrbid which is why the resulting Deacon has many Human features and not Bio-Mechanical.