20th Century Fox have announced that Alien Covenant will be released in cinemas on August 4, 2017 which is two months earlier than previously reported! The news comes from BoxOffice.com, a portal which often posts exclusive movie information. Fox had previously announced Covenant’s release date as October 6, 2017 but it seems that things are going well for Alien: Covenant and it certainly looks like Fox is confident about Ridley Scott’s sequel to Prometheus which served as a story about the origins of the well known cinema monster, the Xenomorph, and as we saw in Prometheus this story could very well be the ultimate story of existence of life in universe.

This Sci-Fi movie will likely be deeply veiled with philosophical, religious and mythological motifs and could become a cult movie of SF genre and bring new dimensions to the story of perfect yet deadly mysterious creature whoms story of origin could in fact be the story of fall of human spirit and omnipresent battle of two confronted sides as in Milton’s “Paradise lost” which ideas and motif will in some extent play in the Alien: Covenant storyline.

Paradise Lost, the original title for the movie suggested that connection with Milton’s epic, and its change to Covenant also suggest that specific motifs from Paradise Lost about Gods covenant with Adam and Eve (fallen humans) could very well have impact in the overall story. Ridley Scott in his movies always explored metaphysical ideas ofimmortality, of existence, of God and of death, so we can expect great things from Alien: Covenant, and we hope that it will surpass fan expectations. From what we can speculate, it certainly seems good by now, with the only problem with Ridley’s movie being an incoherent story. Ridley and Fox have noted that they need to develop the story with great care and this statement can be confirmed by the fact that movie has been written for almost 3 year with participation of three very good screenwriters who are very much familiar with the Alien universe. Fans want original horror and well developed and compelling characters, and Ridley always strived to tell grand philosophical story of the universe and of human nature represented through the Alien monster, can he succeed to create the movie that will bring all those elements together?

We hope… after all big things have small beginnings.

Great news! But still more than a year...

If they don't have to build alot of sets, i can see this being a quick filming...just have the cast run around the natural scenery, running from aliens......but if David still has the Juggernaut, will they have to re-build that set?

did the crew of the Covenant leave the mothership in orbit and just land in a shuttle craft? or is it like the Prometheus. could save a lot of time and budget not having to build rovers and a giant ship.

I hope that they won't rush it so it becomes bad. Hopefully they will take their time so we will have a good movie in the end. Please less of Noomi Rapace because the Shaw character was so annoying.

This is very exciting actually. Means we'll get to see Alien: Covenant even sooner than expected! Things must be moving along well. Thanks for posting this up Enoch! Great coverage as always.

Wooooo! Things must going well during preproduction! Haha great start to the day!

Here's my Alien covenant poster that I recently updated,and I tortured alot with the hologram effect.

Awesome poster, Nebula! Haha I doubt that a synthetic would grow facial hair, but the poster is beautiful!

My idea for a poster: 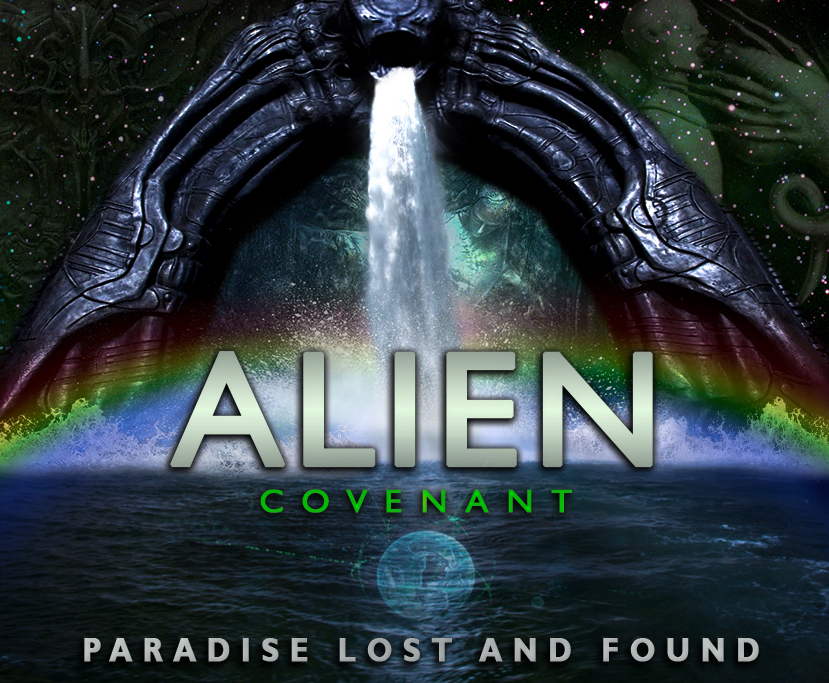 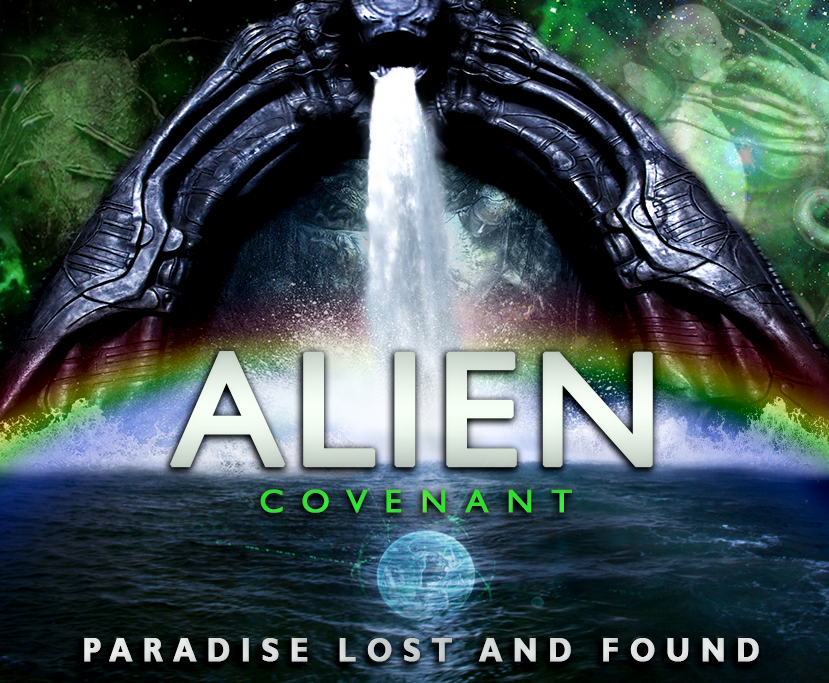 I still think that there is too much colors... but its interesting to me... :)
At least I tried...

Altered and improved version of my first poster: 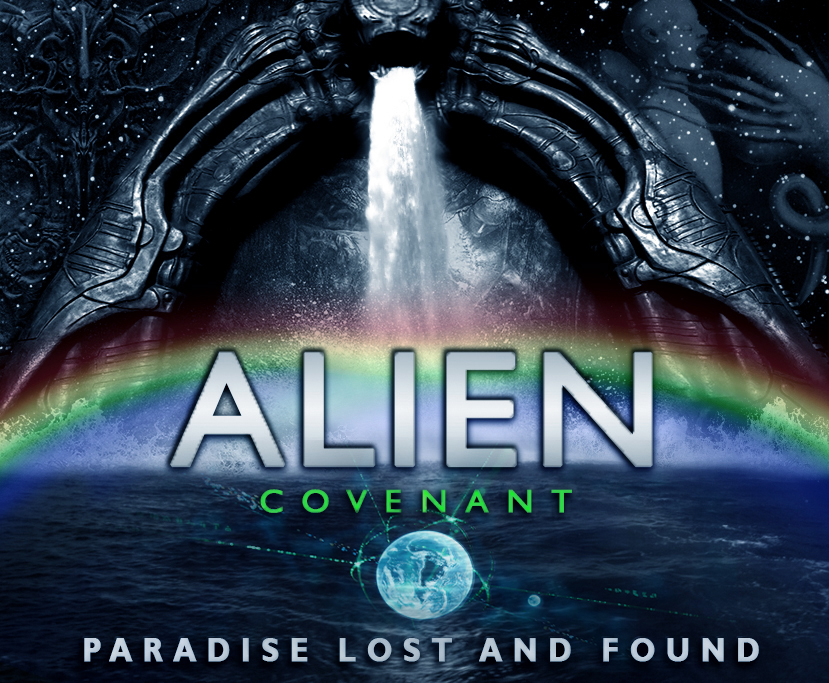 Interesting News and makes sense as there are a few movies comming out in the 4th Quarter of 2017 that are also Sci Fi and so Ridley would not want to be putting his Movie Toe to Toe with them..

As far as being rushed.... we cant be sure... we dont know how much had been Produced Already and what changes are made since Logan came onboard.... When Lindeloff was re-writting Alien Engineers, they had already started work on the Production of Props and Sets.  And so we dont know what sets may have been worked on already.

As far as the Prometheus Sets... its where do they store them?  they stipped down and sold lots of Prometheus off.... but as for the Jugernaught?  Who knows..... we also cant rule out them shooting a few scenes between David and Shaw while they was wrapping up Prometheus.

Shooting Starts next month and i would assume shooting would wrap up in May/June Latest it depends on how much cast is going to apear.... if all we have is Fasbender playing two roles and a Covenant Crew of 9 then a few Xenos and throw in a handful of Engineers.... then such a movie could be shot in a short space of time... less than 10 weeks easy.

As of now we dont know how many different scenes and plots they would cover or how Large the Crew of the Covenant would be.... but i would still think a 12 week shooting would cover most of it...

So regardless if it takes longer... we would have over 13 Months for Post Production and thats plenty of time

Shooting could start in mid March or beginning of April... right after Fassbender finish his shooting of Snowman! I even think that they already shoot some scenes in UK and in New Zealand or New South Wales... maybe some intro aerial shots with chopper or something without main cast...?

Ridley always referred to April (March) shooting as main shooting with main actors in Australia's Fox Studio and in locations of NSW, but all the shooting that doesn't require main cast could very well be completed.

On LINKEDIN site I myself found a bunch of crew that isn't credited on IMDB, and the newest add is Nick Ramsay who was In-House Runner at Ridley Scott Associates/Scott Free Films.

This is what I found on his profile: 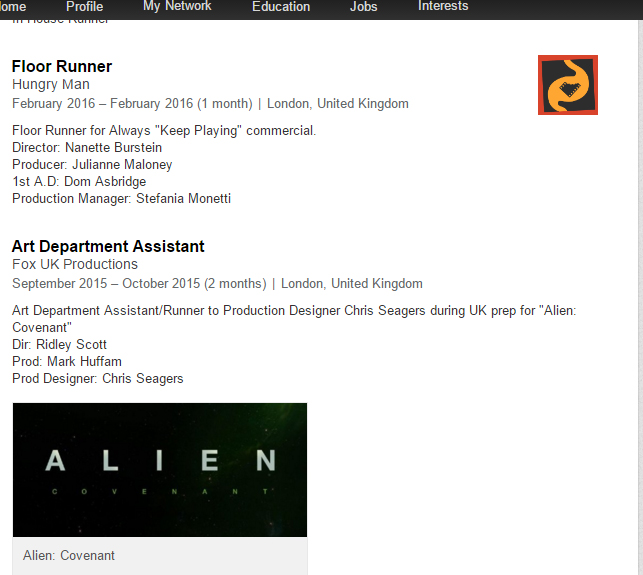 So they had some preparations in UK from September 2015 till October 2015?? What do you think?

It's nice to read that FOX has their inital lanuch dates firmly set. That mostly moves everybody back into 2017 orbit, mostly (if not completely). And yes, even though they're not seeing each other anymore ...they still do lunch from time-to-time.

Bonus links:
Equals
Rocketman
The Future Begins
Behind The Futureman
Visually, My Dear Watson
The World Is Never Enough